Better days: knees in the sand 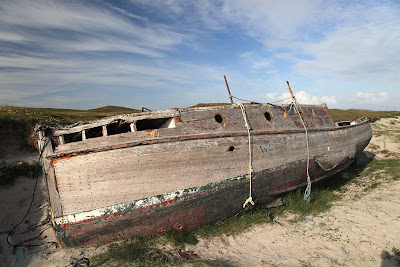 My eye was caught by this old boat which was lying at the high water mark in Scarinish Harbour Tiree. She was lying as she was when she was driven here by a winter storm but her function can still easily be discerned from her near complete form. 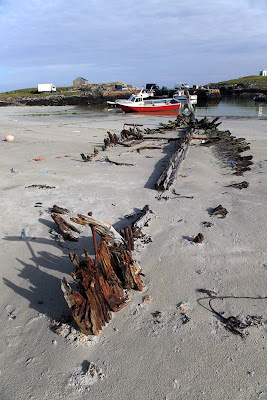 In contrast, little remains of this sad relic of former days the Mary Stewart. Only the stumps of her timber knees project from the sand, hinting at the once proud lines, which carried the essential trade of Tiree. 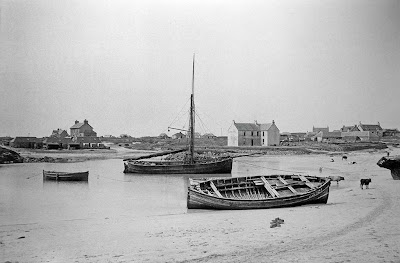 I wonder if she was this masted sailing ship, photographed by Erskine Beveridge in Scarinish harbour in 1898? Note the hotel building in the background, which has since been considerably extended. Old photographs like these make us realise that our lives are very transitory things compared with places and the environment. All the more reason not to leave a mess!

Better days is also a metaphor for my own current situation. It was the 13th of the month. I dislocated my knee on the sands of Gunna at the south end of Coll. It gave way when I turned to take a quick photo. As I lay there crying out for my mummy, I could see my lower leg was at a funny angle and that my knee cap had slipped round the outer side of my leg. Our mobiles didn't work, I had been unable to get the coastguard MSI broadcasts on the VHF, we were on an uninhabited island but I did have a GPS EPIRB.... 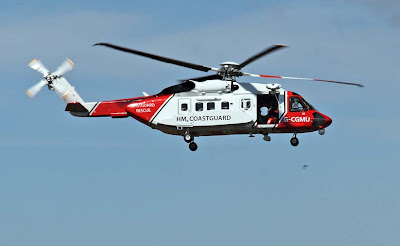 The thought of the big red and white Coastguard helicopter emerging from the heat haze on the horizon (with a "wump, wump, wump" and March of the Valkyries blaring from the in flight entertainment system) had a certain appeal. I do love the smell of kerosene in the evenings.

However, I was enjoying our little trip, apart from the screaming agony in my knee, and the prospect of being untimely ripped from the bosom of Gunna was rather upsetting. "Oh dear" I thought, "I had better get myself out of this mess." So I waved the helicopter boys away, took a deep breath, dug my heel deep into the sand and levered my leg straight. I couldn't breathe with the excruciating pain but it went back in with a sickening clunk. I then hyper-extended my knee (to take the tension off my quadriceps) and used both hands to lever the tendon and the knee cap back into place. I screamed at the watching seals as the patella scraped its way over the bones. I nearly blacked out but it is was done. "Oh bother! That smarted some!"

I took a handful of Diclofenac and then strapped up my knee, which was now the size of a melon, with duct tape. I wish I had had the foresight to shave my leg before putting the duct tape on... I was really looking forward to the therapeutic effects of some 16 year old Bowmore distillate and poured us all some snifters, as the others were all looking a little white, even David the vet. Unfortunately the Diclofenac had hurt my stomach, so David ended up with my Bowmore!

What now? Well Jim had brought a walking pole, so I used that to hobble about and direct the others to load and carry my boat down the beach. I filled a 10l water bag and put it in the cockpit floor beneath my knee. Jennifer held my kayak steady in the surf and David and Jim lifted me into the cockpit. It was only 56km back to Portuairk and if we left now it would be high water when we got there and that would save a 500m walk back to the car!

13 days later I am still laid up. Yesterday my calf and foot swelled up and became very hot and painful when I was visiting my wife Alison, who was just out of theatre having had a hip replacement (I was supposed to be her gopher, a very serious loss of Brownie points)! When I hobbled into her ward on crutches, the sister said " I'm sorry we were not expecting you." "That's a pity." I replied "My wife and I thought you had a 'two for one' offer on this week!"

My daughter insisted on dropping me off at the local Casuality Department (Glaswegian for A&E or Emergency Room). It was 8:30pm. I could see it was going to be a long night, in fact, I thought she had dropped me off at the local Police station! It was 5 hours before I was seen but the floor show was better than "Big Brother"!

It turns out I have developed a deep vein thrombosis. Untreated, these can be somewhat troublesome little things (but at least 90% of people don't get a big pulmonary embolism and die). I was quite pleased when the young doctor offered an anticoagulant jab. I'll need a few more of those if I don't want to end up like those boats in Scarinish harbour; on my knees in the sand, at the end of my seagoing days....