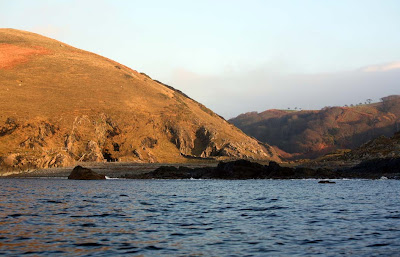 On our journey south along Ayrshire's Atlantic coast, the volcanic cliffs are breached in only one place. The low winter sun played a warming light on Curarrie Port but the air was icy cold. The wooded glen follows the line of a geological fault but the tiny present day Shallochwreck Burn is not big enough to have cut the deep glen. However, at the end of the last ice age, it would have been a raging torrent carrying melt water from the glaciers of Galloway to the sea. 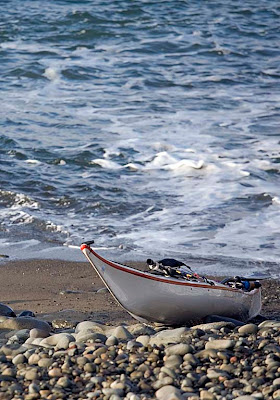 Currarie port is just about the only landing spot in 10km of this rocky coastline. Even so surf often breaks heavily on it and you need to be prepared for a cockpit full of water on launching or landing. I do love the fine lines of the Valley Nordkapp LV hull. I just wish it had a Rockpool cockpit! 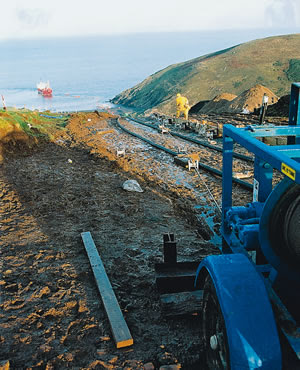 Northern Ireland Energy Holdings.
In 2001/02 the construction of the Moyle Interconnector allowed the export of electricity from Scotland to Ireland. The route of the 500MW cables also took advantage of this breach in the cliffs. Fortunately there is no trace of the excavations. 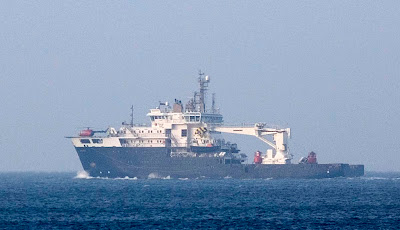 Just offshore from Currarie Port this mystery ship loomed out of the sea mist. Her course was much closer inshore than the normal shipping channel. She was flying no flags to identify her origin. The large crane may be for lifting and lowering a submersible. Perhaps she is a cable inspection vessel?

One way or another, lots of things today are linked to a meting glacier 10,000 years ago!

P.S. Stuart A. has kindly identified the ship and her role:

"The ship is the MV PHAROS which belongs to the Northern Lighthouse Board. She is used for the maintenance of navigational marks - hence the crane for lifting large buoys, etc. and the reason why she was off the beaten track."

The NLV Pharos came into service in March 2007. She was built in Poland. Her smaller sister ship is the NLV Pole Star. She was commissioned in 2000 and was built by Ferguson's on the Clyde.
Posted by Douglas Wilcox at 11:04 pm 2 comments: