The foundation of St Oran's Chapel and voices of ancient saints 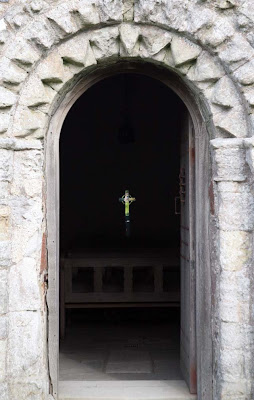 The oldest building in the grounds of Iona Abbey is St Oran’s chapel. It stands on the site of Reilig Odhrain, or St Oran’s shrine, around which is an ancient burial ground containing the remains of many kings from Scotland Norway, Ireland, Northumberland and Man. The early Christians in Ireland and Scotland did not practice their religion in the same way as that of Rome. Indeed Iona had been a sacred place to the Druids for generations before St Columba’s time. There is a grim legend attatched to the building of the original Reilig Odhrain which hints that there was perhaps a long and drawn out transition between Druidism and Christianity.

The following account was quoted by Macleod Banks in 1931. Her source was a Dr Maclagan of Clachan, Kintyre in 1894.

“When this chapel was in the course of erection, no matter what they would do or how well the work was done, every morning all that had been built the previous day was found thrown down. At last a voice came to St Columba, telling him that the only way to get the chapel completed was to bury a living man under its foundation; without that, the voice said the chapel could never be finished. Columba decided that no one could be better to put under the foundation than his own son, and accordingly got him buried at once and proceeded to build on his top. One day, however, Odhran raised his head, and pushing it through the wall, said, - “There is no Hell as you suppose, nor Heaven that people talk about.” This alarmed St Columba, in case Odhran should communicate more secrets of the other world, and he had the body removed at once and buried in consecrated ground, and St Odhran never again troubled anyone.”

We looked through the door into the darkness within. Only the glint of a gilded Celtic cross on the altar was visible. A light breeze rustled round the door and we thought we heard whispering voices echoing round the dark walls of the chapel's interior. It sounded like it might have been only a house martin's nest but we decided that we did not want to hear what St Oran might have to say to us. We chose not enter and instead paid our respects to St Oran in the light of the summer evening. Then, in the gathering dusk, we left Reilig Odhrain for Martyr's Bay where our sea kayaks lay waiting to carry us back across the Sound of Iona. Our visit had been undistubed by the sound of the voices of either day visitors or ancient saints.