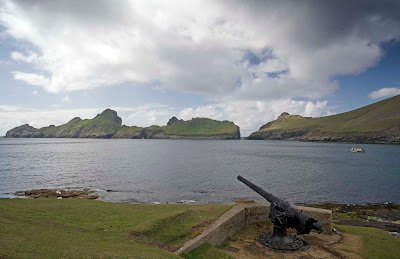 Just beyond the store at the edge of the village street on Hirta, you will find this 4.7" quick firing naval gun emplacement overlooking Village Bay. It seems so out of place in such a peaceful spot. There must be an interesting story behind such an incongruous finding!

After the devastation reeked on Allied Atlantic shipping in by German U boats in WW1, the Royal Navy installed a wireless signalling station on Hirta. On May 15th 1918 a U boat surfaced in Village Bay. It fired 72 shells into the radio station. The nearby store, manse and church suffered some damage but none of the village houses were it. In fact, the only casualty of the bombardment was a lamb.

In response, the Royal Navy constructed the emplacement with a sunken magazine and a QF gun from a naval gunboat. It was completed by October 1918, a month before the end of the war. It was never fired in anger.