An Art Deco landmark in the twilight at the Mull of Kintyre. 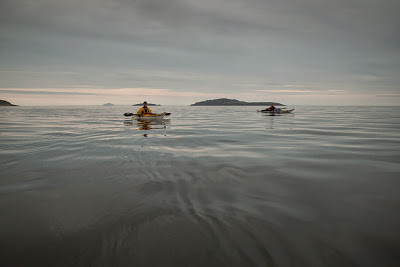 As we crossed Carskey Bay, on the east coast of the Mull of Kintyre, the wind dropped to nothing. Behind us, beyond Rubha MacShannaich lay the distant outline of Ailsa Craig, Sheep Island and Sanda. 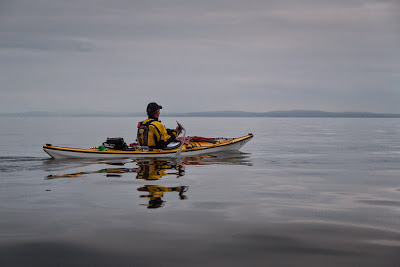 Ahead the coast of Antrim in Northern Ireland merged with the lowering grey clouds. This was the last we would see of Ireland on this trip! 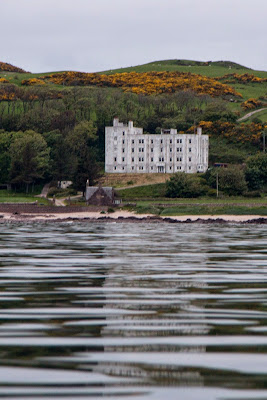 Above the bay, stood the sad remains of the art deco Keil Hotel. It opened in 1939 and during the war it was used as a Royal Navy hospital.  It was also a useful landmark for WW2 Atlantic convoys when all the lighthouses were extinguished. At certain times, the blackout curtains would be opened and the lights lit to guide expected shipping. It was also a welcome landmark for us as it meant we were nearly at our destination. After the war it reopened as a hotel but closed in 1990. 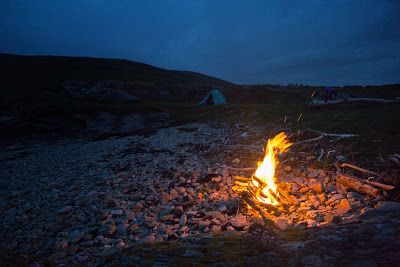 We arrived at our chosen campsite at 9:45pm, some 15 minutes ahead of schedule, despite that pesky headwind. This allowed us to get the tents up before it was completely dark. 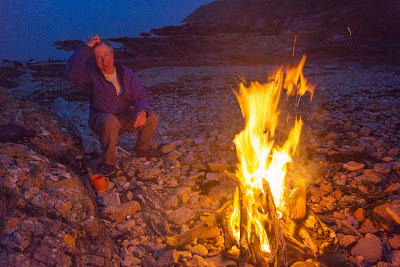 Soon we had a roaring campfire going. We could hardly believe our adventure had begun so well and tomorrow, given fair weather, we would round the Mull of Kintyre. Slack water at the Mull would be at 06:40 am the following day, so we would need to have an early start!
Posted by Douglas Wilcox at 11:48 am 3 comments: