Reflections on mountains, deforestation and wolves in Caolas nan Con. 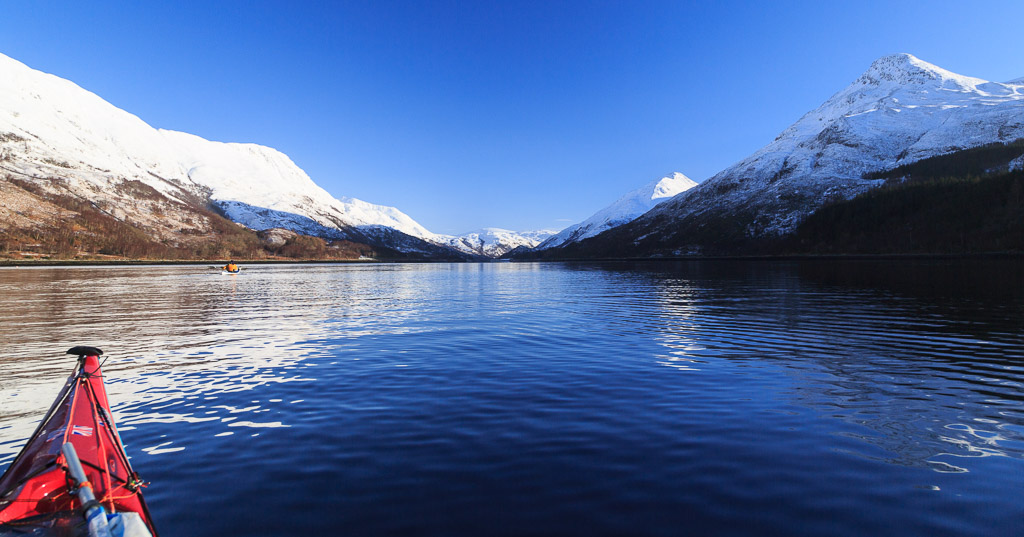 After luncheon we continued east under... 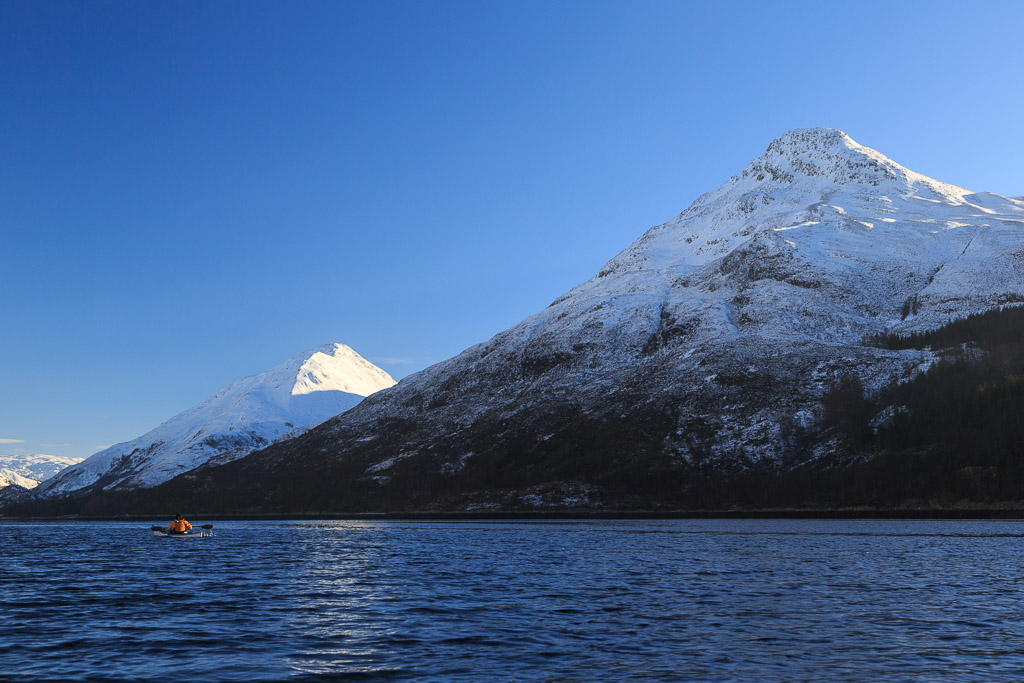 ...the shapely peak of Sgorr na Ciche which cast a long shadow... 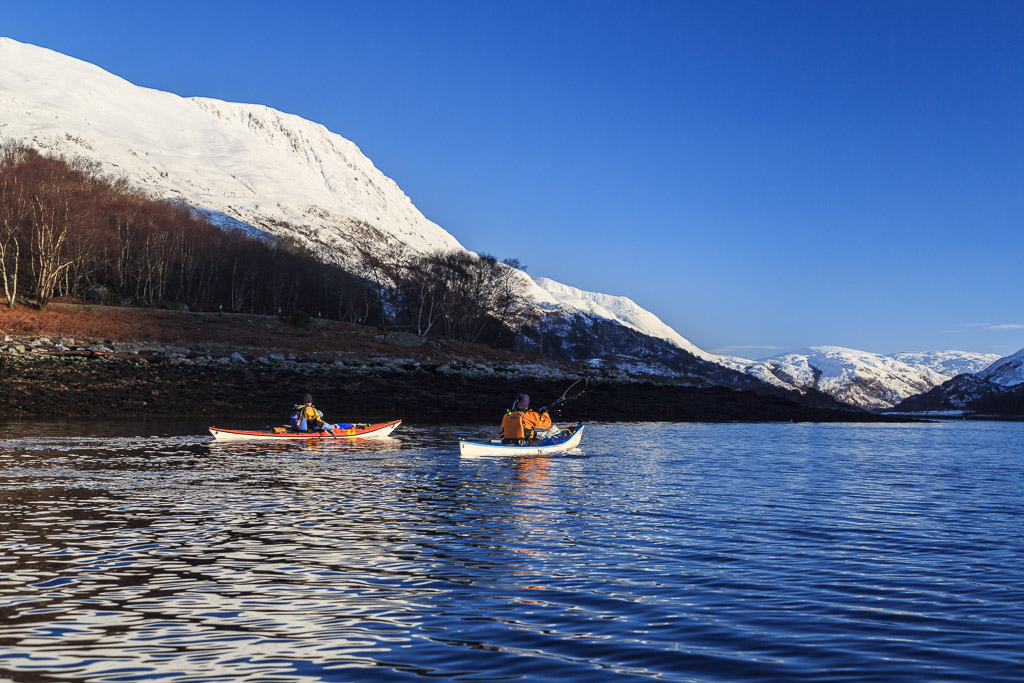 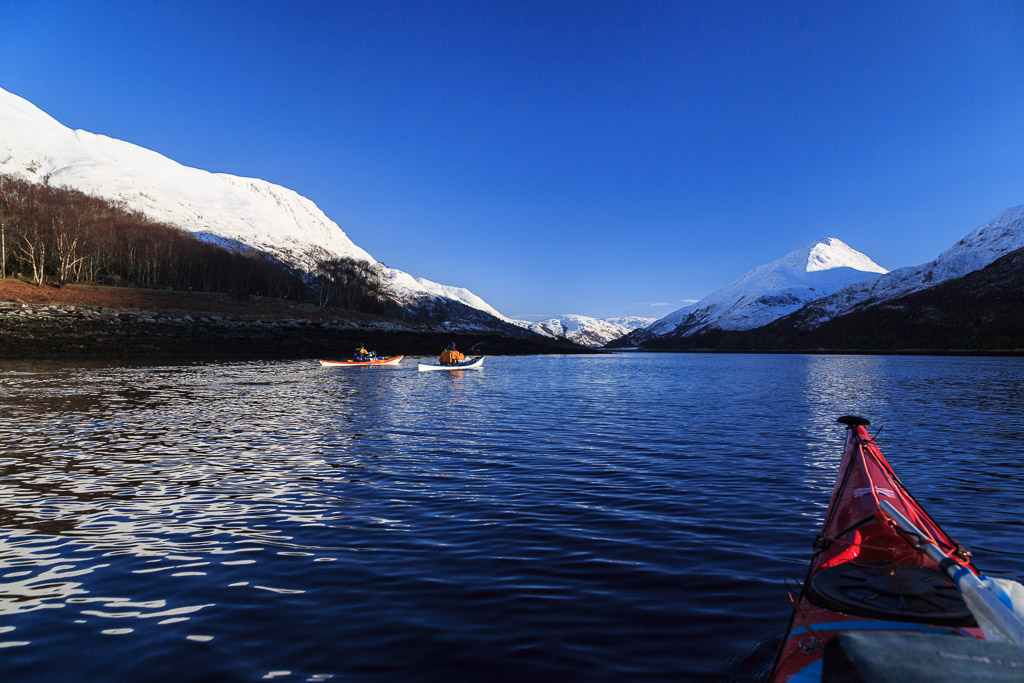 We were just about to loose the sunshine and enter the perpetual winter shade of the inner loch. 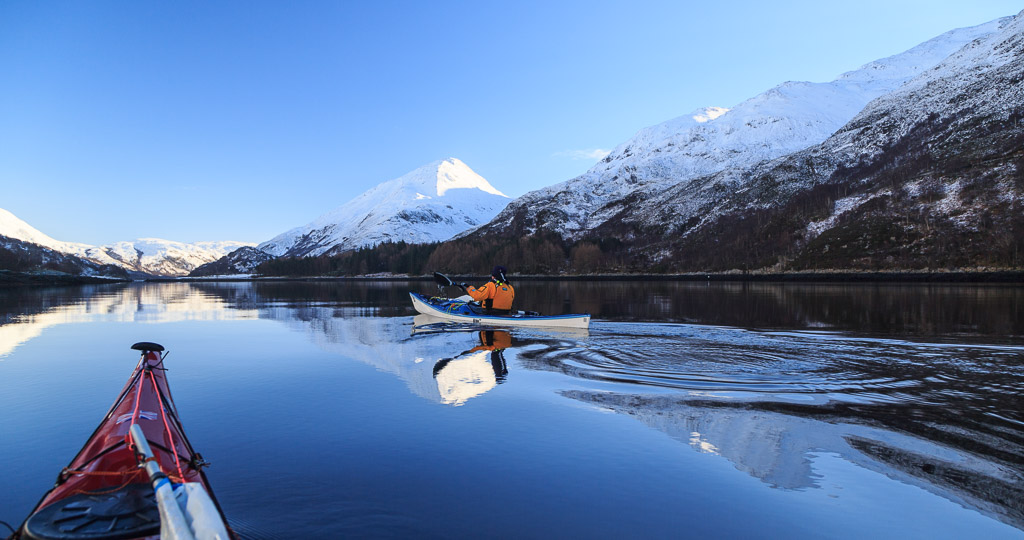 As we paddled further east we encountered mirror calm conditions. 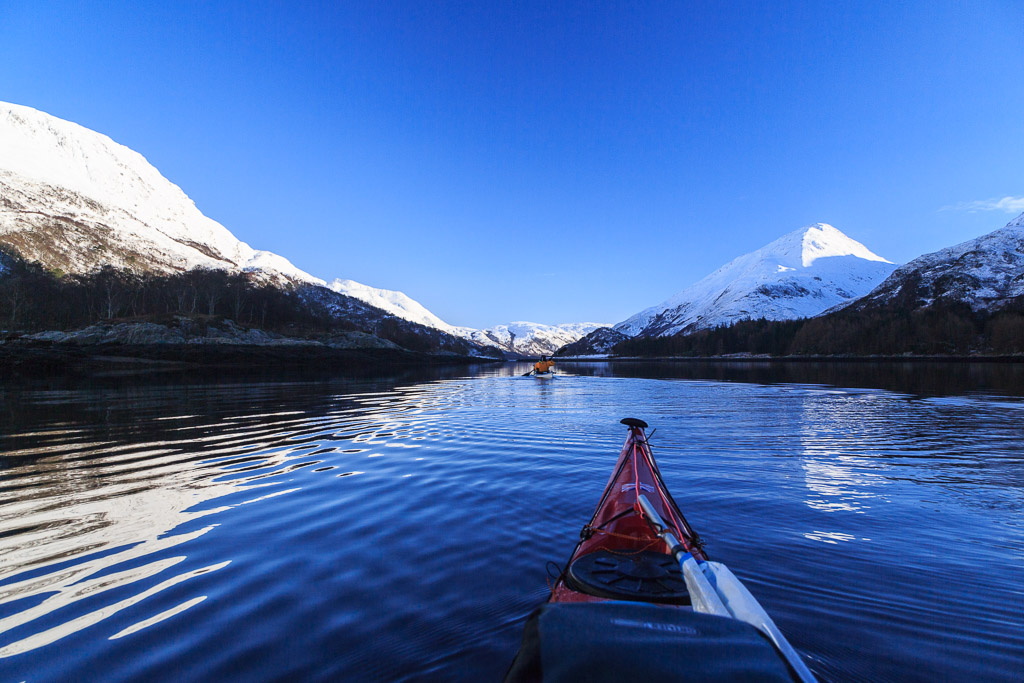 The cone of Garbh Bheinn 867m now dominated the south shore of the loch  while... 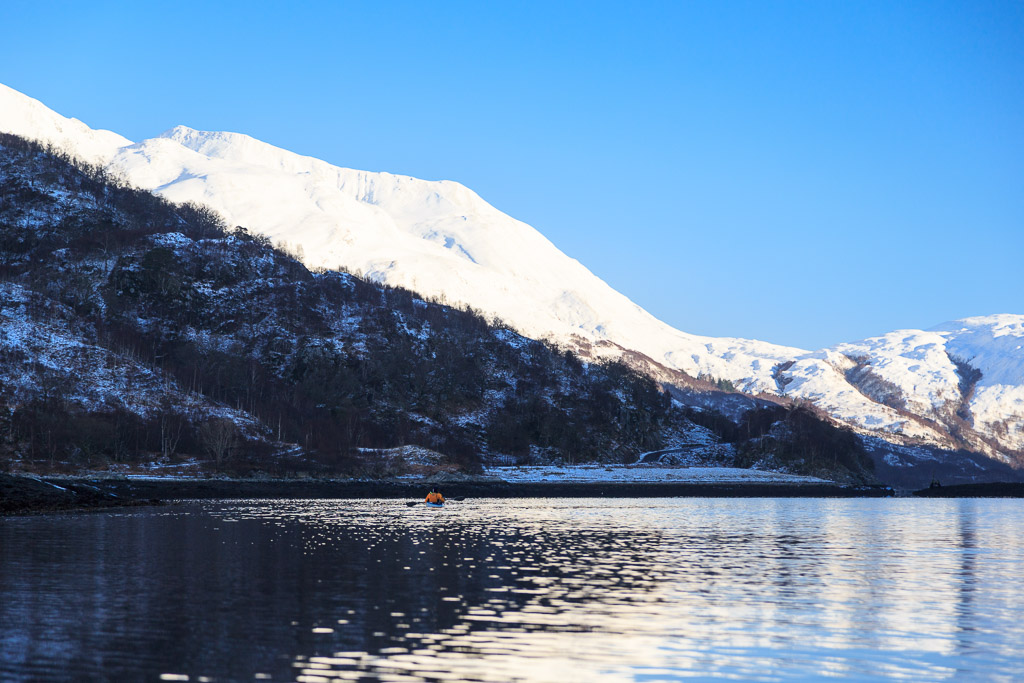 ...Am Bodach 1032m commanded the horizon to the north. 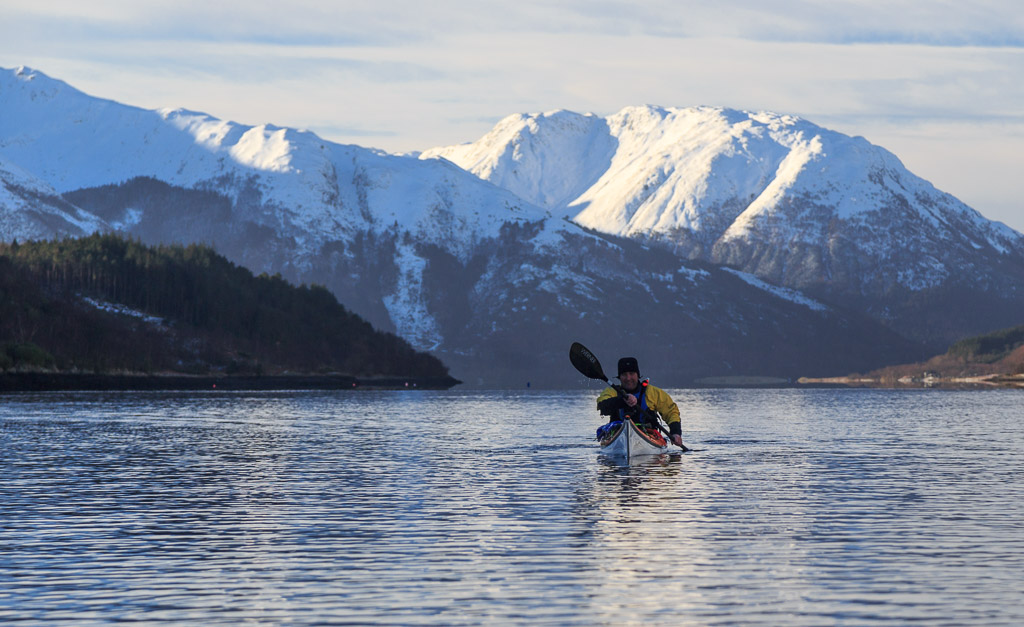 We made good progress and soon the mountains at the mouth of the loch...

...were left far behind. Even the reflections on the calm waters were...

...dominated by the mountains. 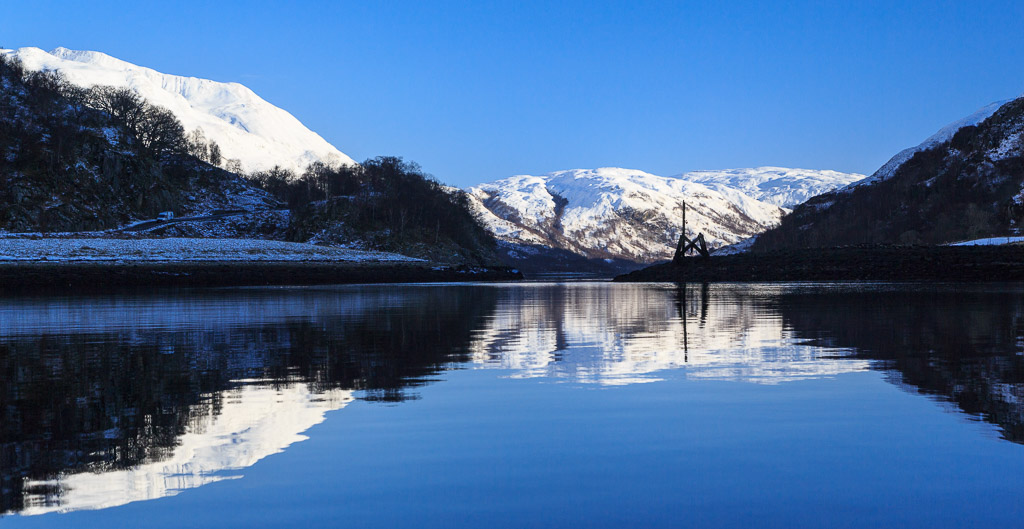 We were now approaching the tidal narrows of Caolas nan Con (narrows of the dog). 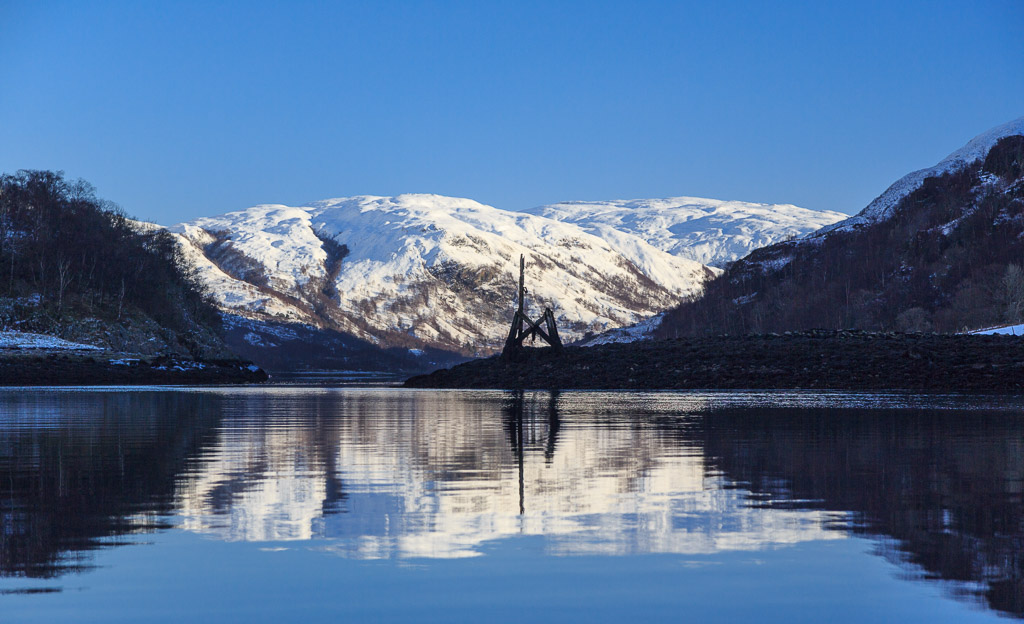 Some sources say this is where shepherds and their dogs would swim across but... 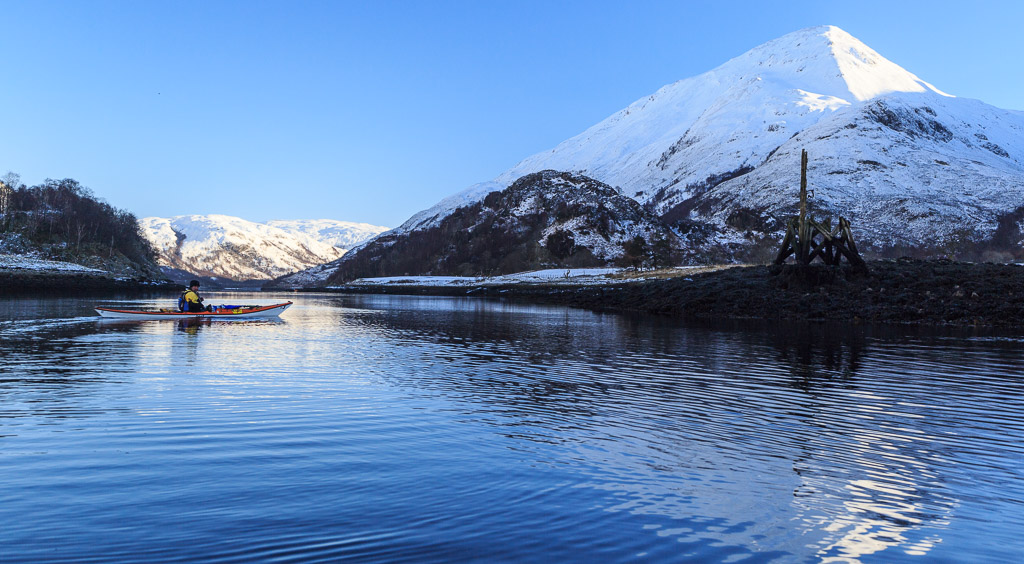 ...I like to think that it is where wolves would have swum across.Wolves roamed much of Scotland until they were exterminated sometime in the 18th century. They were feared predators of livestock and in winter would unearth recently buried corpses. This led to the tradition of Highland graveyards being placed on islands (such as Eilean Munde) in Loch Leven, Loch Awe and Loch Maree and also  Handa island off the coast of Sutherland. Wolves are such strong swimmers that I am not sure how much protection an island burial would give a corpse. Wolves were a particular problem in this part of Scotland. The ancient Mamore Forest, which once covered the ground between Loch Leven, Loch Treig and what is now the Blackwater reservoir, was burned to the ground at the end of the 16th century. Though this removed the wolves' habitat it also destroyed a wonderful environment characterised by Scots Pine. The bare hills we see today may be starkly beautiful but they are a man made desert and their current appearance is a pale shadow of their former beauty. When walking over the peat bogs in the area to the east of the head of Loch Leven it is still possible to find "bog wood", the preserved roots of this lost Caledonian Forest which are now several hundred years old.. 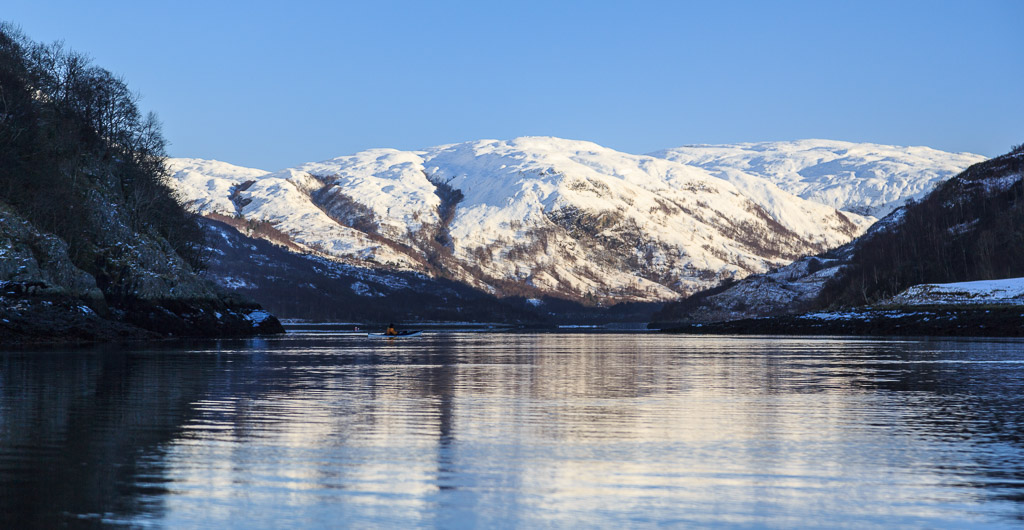 We passed Caolas nan Con through just about slack water. The ebb starts at the same time as the Ballachulish narrows at the entrance of the loch but the flood is delayed by about two hours. Maximum flow is about 6 knots at springs on the flood but it is usually possible to get through against the flow.
Posted by Douglas Wilcox at 9:40 am 2 comments: