A night crossing of the Firth of Lorn by kayak.

As we left Loch Buie and entered the Firth of Lorn we encountered a large swell rolling in from the Atlantic. In the distance we could see the rounded outline of Scarba on the far side of the Firth. 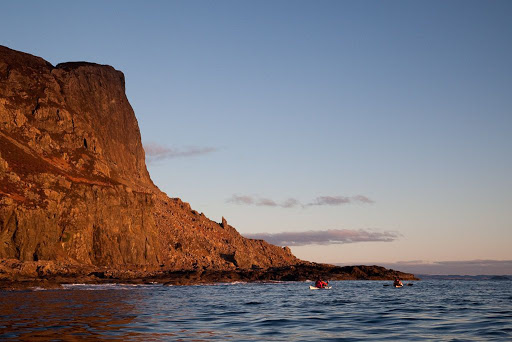 Once round the point, the swell subsided and we passed close under the mighty cliffs of An Garradh. Mull has a reputation among climbers for rotten basalt rock but these cliffs looked superb. I wonder if any climbers have been here? The cliffs were lit by a lovely warm light except for the tops which were in the shade of some low cloud on the western horizon. 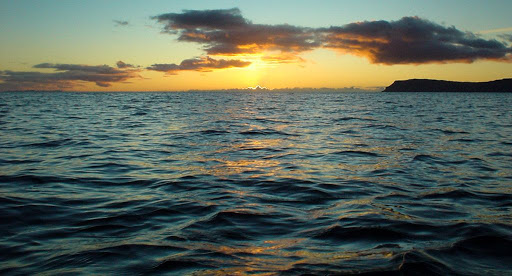 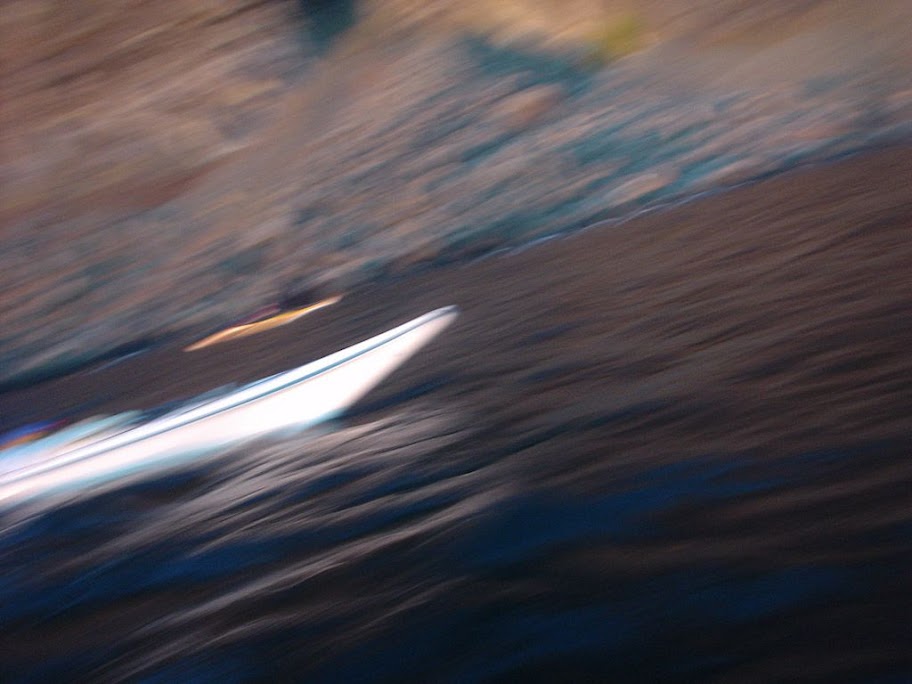 In the fading light, we continued along the base of the cliffs and paddled inside of Frank Lockwood's island. This is no more than a flat skerry. Lockwood, 1846-1897, was Solicitor General of Scotland. He and the 21st MacLaine of Lochbuie were married to sisters and the two men became good friends. I suspect the island was named as a joke, Frank certainly would not have made much of a living from it. 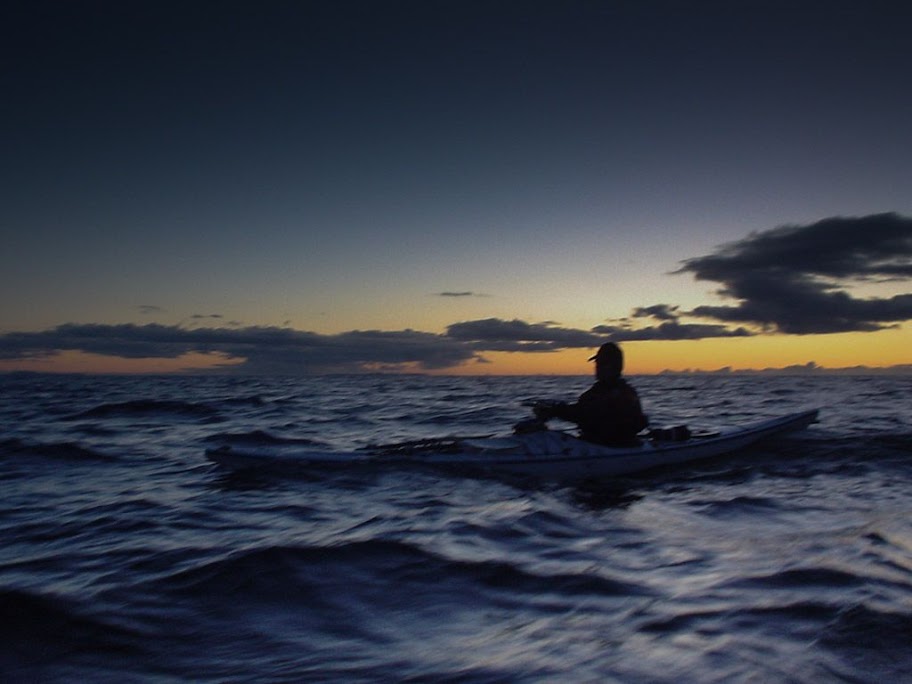 At 1735 the light was fading fast and we had started on the final 16km open crossing to Seil. The waves began to build as we became more exposed. 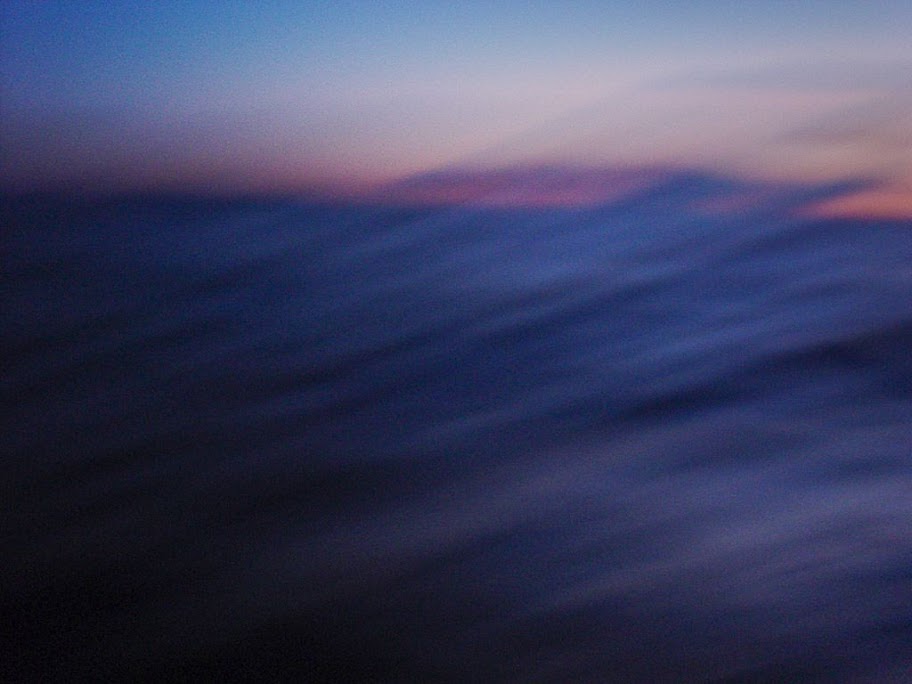 We hit a F3-4 45 degree headwind and an adverse 1 knot tide. Most of the crossing was by starlight and we could only feel and taste the waves. We eventually landed at 1940 (nearly two and a half hours after sunset) after covering a total distance of 44km. 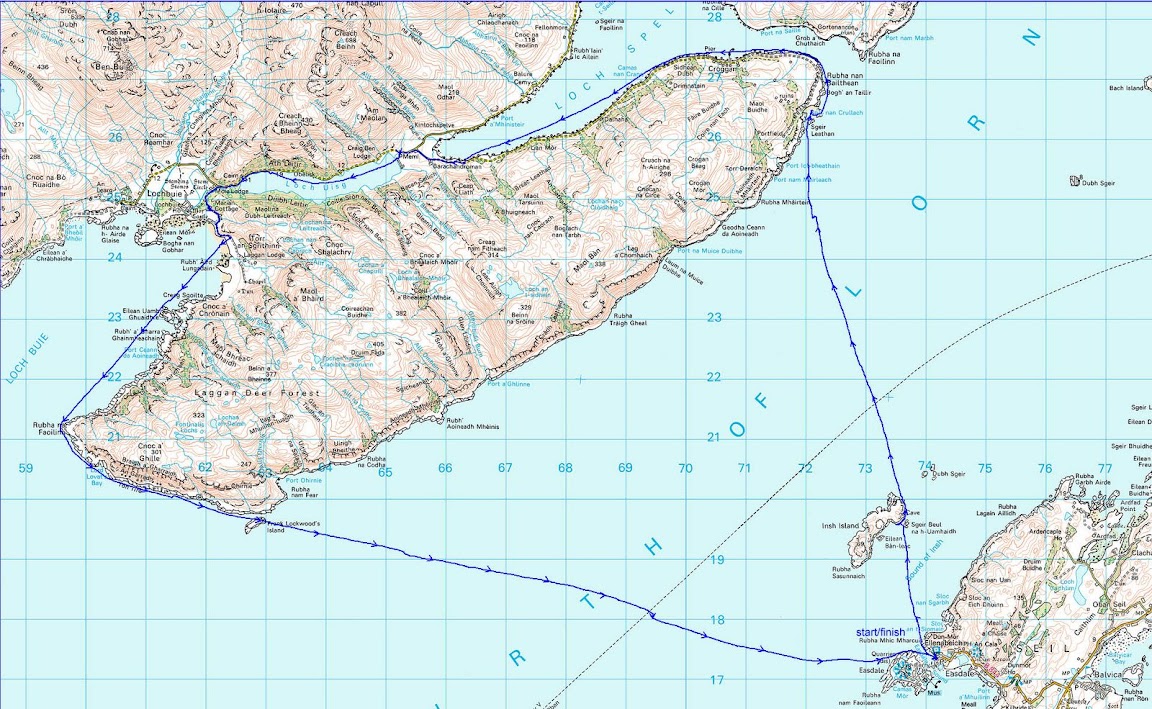 The GPS track shows where we took two brief breaks and were carried down wind and tide. After the second break we stopped maintaining a ferry angle to keep on the GPS bearing to Seil. We could see the lights of Easdale and just paddled straight for the them. You can see how the 1 knot tide and wind then carried us off course.

The backup plan, if weather turned before we left Loch Buie, was a rather decent B&B on Mull.

We do most of our paddling in winter on day trips so we are quite used to coming home in the dark. We are fair weather paddlers and so carefully watch the weather forecasts beforehand. I checked tide times and flows and marked up our maps with the details, I also checked the times the Colonsay ferry would cross our route and made sure we were not there!

For the crossing we had 5 head torches for the three of us and spare batteries, VHF radios and listened on 16 for the MSI weather broadcasts, EPIRB, rocket flares, daynight hand flares, laminated maps, compasses and mapping GPS. For most of the crossing we paddled three abreast for ease of maintaining contact.

We all had dry suits, goretex fleece lined mountain caps and pogies and carried spare neoprene gloves and balaclavas. Under the dry suit I wore Fourth Element Arctic gear which is a thick double fleece.

In case there was a problem after we left Loch Buie, we also carried spare Buffalo jackets and trousers and a 4 man bothy bag and foam mats to sit on. Spare food, water, stove, lighter, dry kindling, first aid kit and boat repair kit. If the wind did get up (we also had an ebb tide to contend with) and we could not get uptide and upwind to Seil, we could have made a run for the east coast of the Garvellachs and bivvied there or, if it was open, used the bothy on Garbh Eileach.

If the weather got right out of hand, we had short tow ropes with which we could have maintained a raft and run before it, towing a drogue. If real s**t had happened I could have let the EPIRB off but it would have had to be pretty bad to do that, after all I didn't let it off when I dislocated my knee on Gunna!
Posted by Douglas Wilcox at 8:49 pm 2 comments: 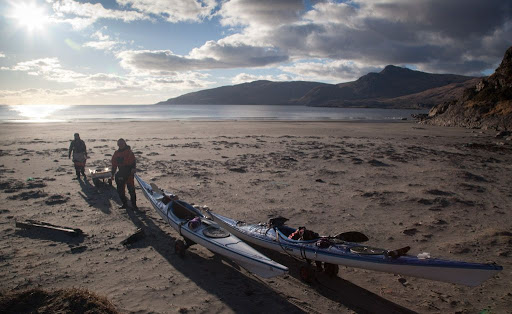 Despite Jennifer and Jim having done most of the heavy work, the portage had taken much longer than I had expected because of the pain in my knee. The shadows on the sand were long by the time we started to move the kayaks to the water's edge of Loch Buie. 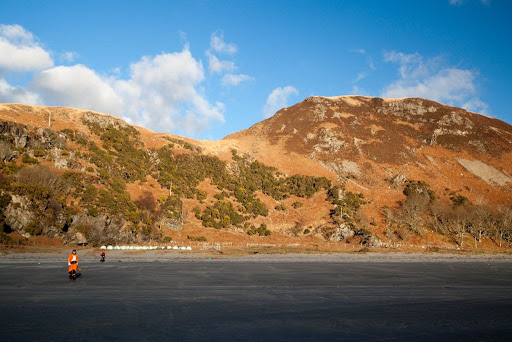 The low sun gave a lovely warm light to the low hills behind the beach. The dark green bushes are gorse. In the spring they will be covered in the yellow flowers that give the loch its name, Loch Buie; the yellow loch. 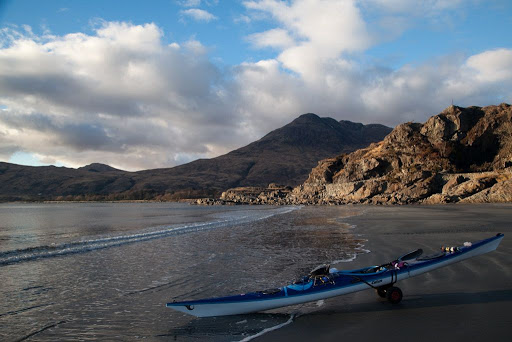 At last we were ready to go and the trolley's were disassembled and stowed in our rear hatches. 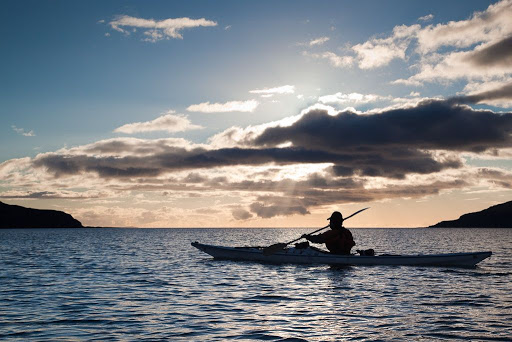 It was a wonderful feeling to be afloat again but we were now faced with a 23km crossing of the mouth of the Firth of Lorn back to Seil. There would be no places to land and most of the crossing would be in the pitch darkness of a moonless Scottish winter's night. What an adventure! 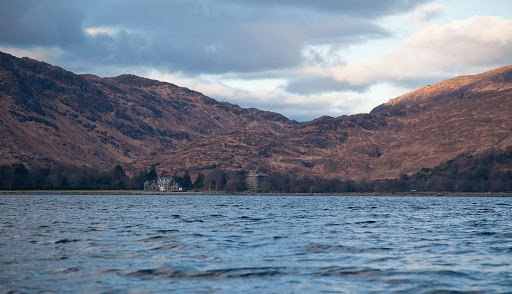 We took a final look back at Loch Buie. We could now see Lochbuie House beside Moy castle at the head of the loch. 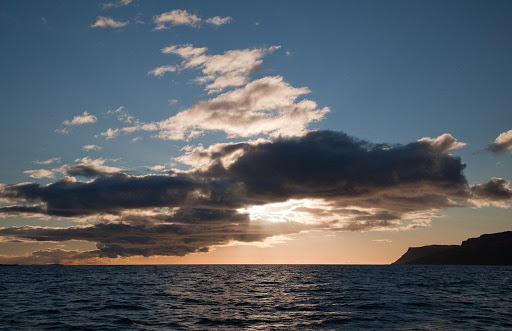 On the horizon ahead, low lying Colonsay contrasted with the bold outline of Malcolm's Point on the Ross of Mull. 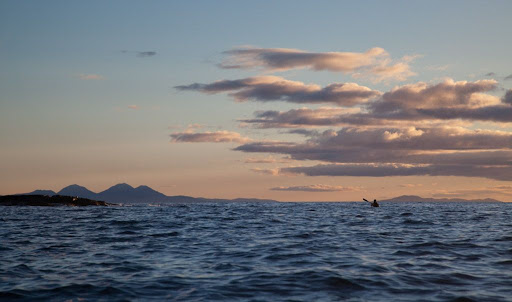 As we emerged from the confines of Loch Buie we rounded the low wave cut platform of Rubha na Faoilinn and the horizon opened up. On our left, the bold outline of the Paps of Jura heaved high above the lower hills of Islay on the right.
Posted by Douglas Wilcox at 7:53 am 5 comments: