En route to Erraid and the Ross of Mull 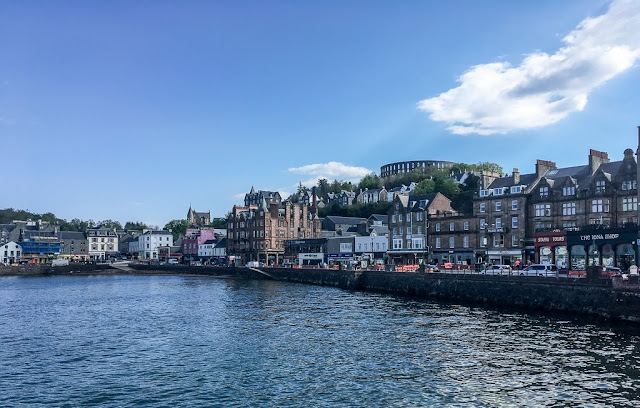 The road and ferry trip to the Ross of Mull is a long way wherever you live on the mainland. Ian and I had talked about returning here for ages and on the 11th of May we finally set off in the company of Donald in his little RIB and Alan and Lorna. You will be able to follow this trip in trivision on Ian's blog here and Donald's blog here.

Donald and I met up in Oban for a coffee and a stroll before setting off. I wanted to photograph the various slipways near the main ferry terminal. The nearest is the Calmac slip for the Lismore ferry but there always seems to be a reserve ferry sitting in there. 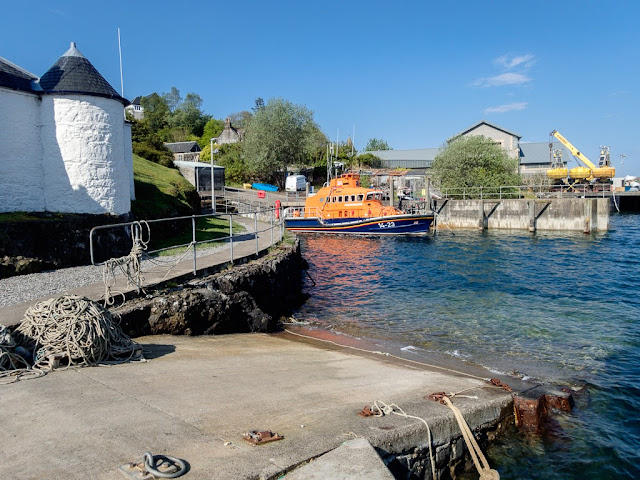 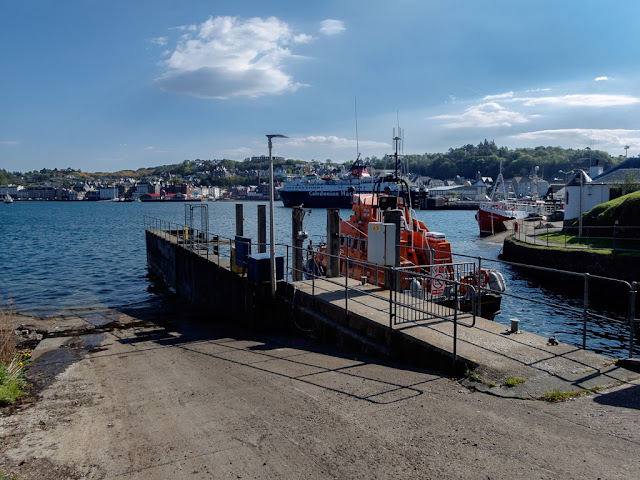 The public slip is furthest away. You might be able to avoid the busy Gallanach Road by trolleying round the path in front of the lifeboat station and through the ice factory yard to the ferry terminal. 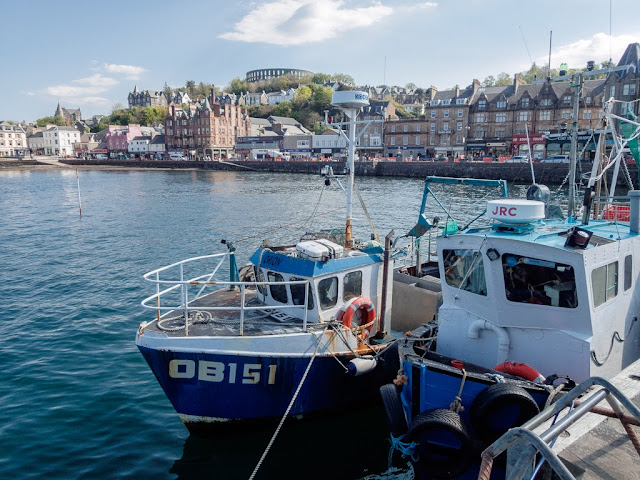 We walked back to the town past the fishing pier as we had some time.  This is OB151 FV Orion. the quayside restraunts were doing a brisk trade selling sea food platters to Chinese tourists who certasinly seembed to be enjoying the food and the sunny ambience of Oban. 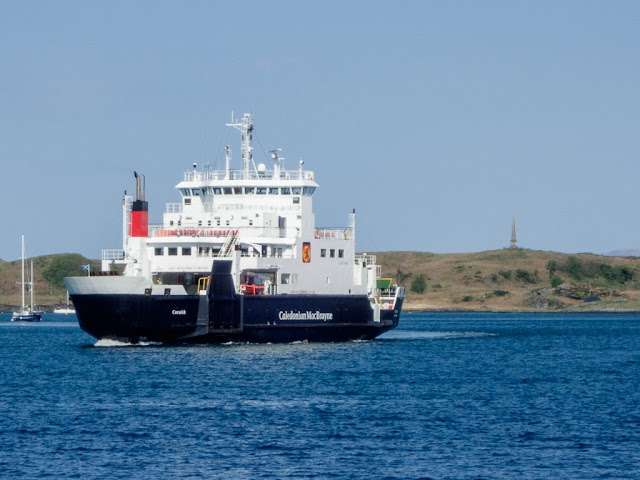 We had plenty of time and the first ferry to Mull was the MV Coruisk which has recently been transferred from the Mallaig Armadale run to Mull due to the explosion in traffic caused by the introduction Road Equivalent Tarriff which has meant the ferries (and the roads) are full of camper vans. If I was transport minister I would only allow camper vans on the road between the hours of 1 am and 4 am. 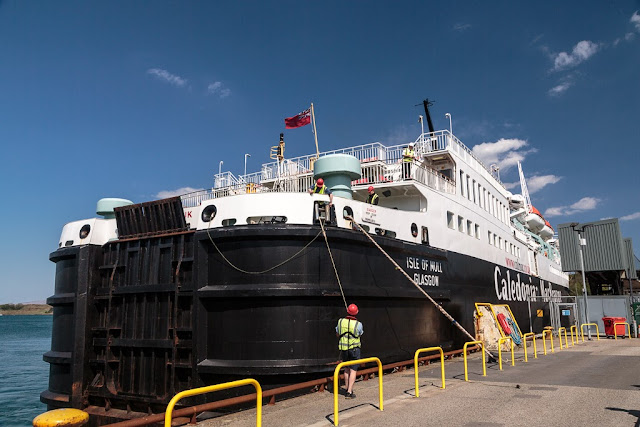 We did not have long to wait until our ferry the MV Isle of Mull came in and soon...

...we were aboard. While we were loading, Marine Harvest's brand new 70m well boat the Ronja Challenger berthed at the ice factory quay. 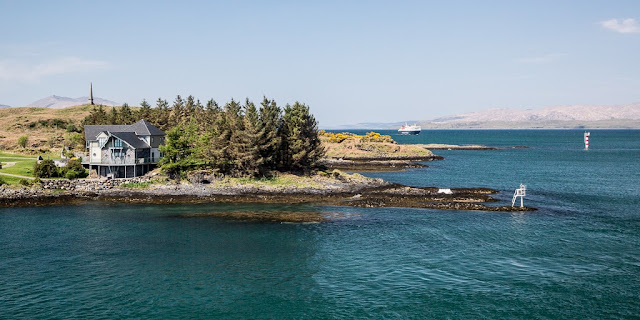 Soon we were off passing the north end of Kerrera where this rather splendid house is for sale for around a mere £1,000,000. 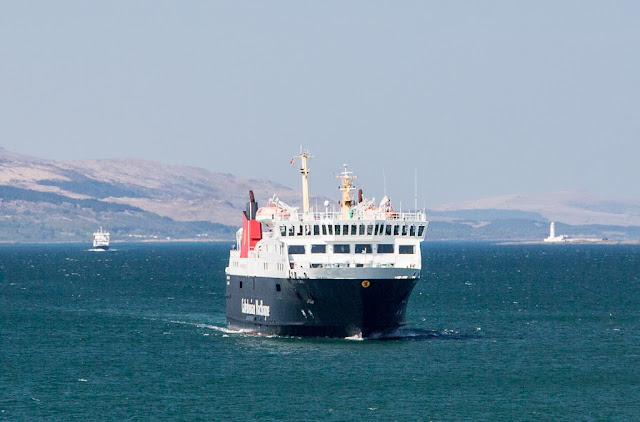 The channel to the north of Kerrera is rather busy with shipping and the MV Isle of Lewis which serves Barra from Oban... 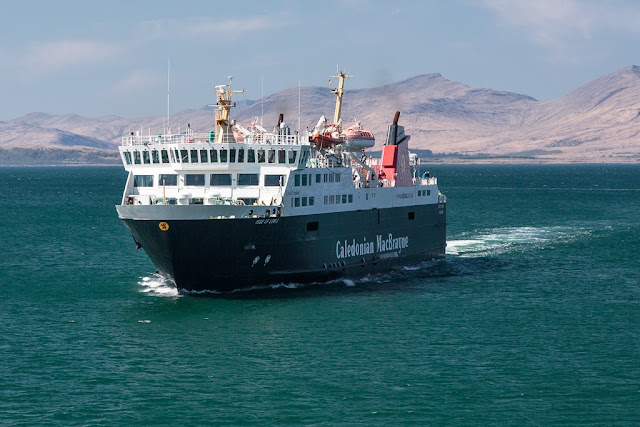 ...came in as we were leaving closely followed by the returning 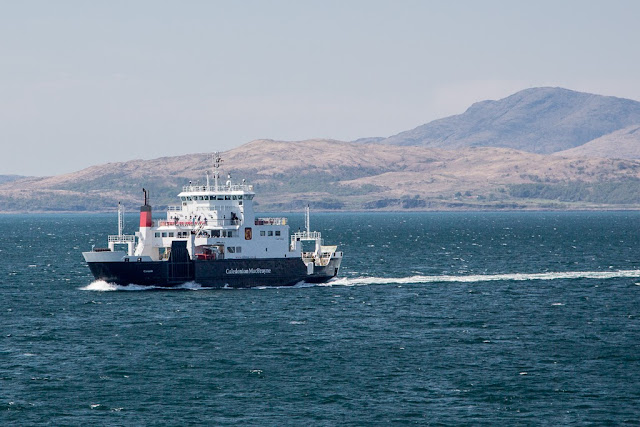 ...MV Coruisk. As you can see a fresh NE wind was blowing.

Half way to Mull we passed Lady's rock where Lachlan Maclean of Duart left his wife to die in 1527. She was rescued by a passing boat and he was later murdered by her brother. 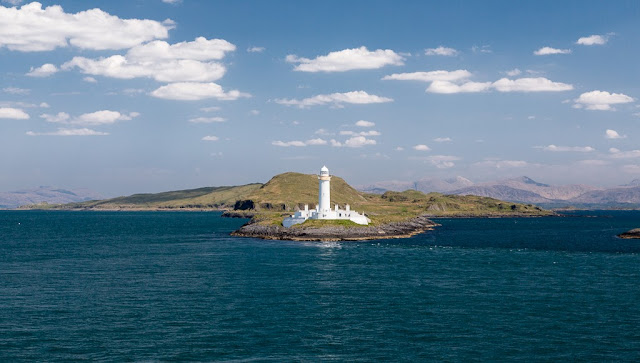 The bottom end of Lismore is marked by the Eilean Musdile lighthouse. 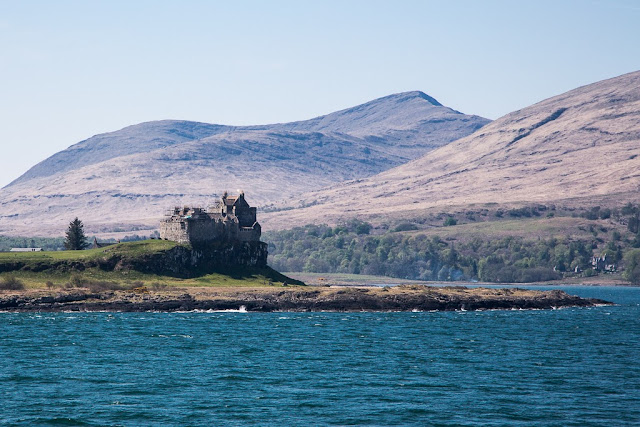 Then we passed Duart castle on Mull. If you are paddling rond the coast here it might be worth keeping further out. The water close to the coast is often very disturbed, 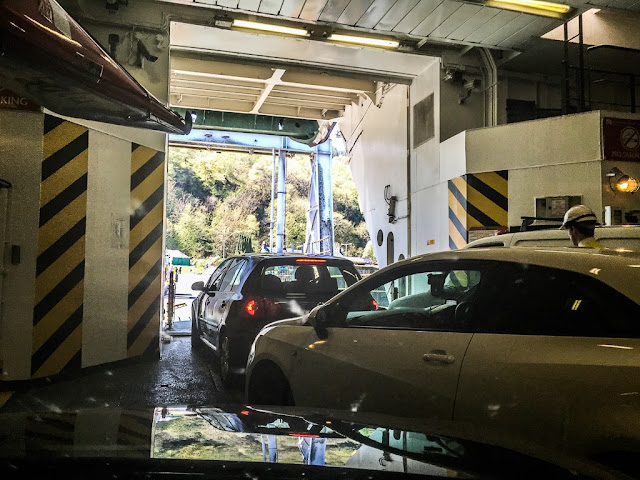 Soon we landed and the ramp came down on Mull. 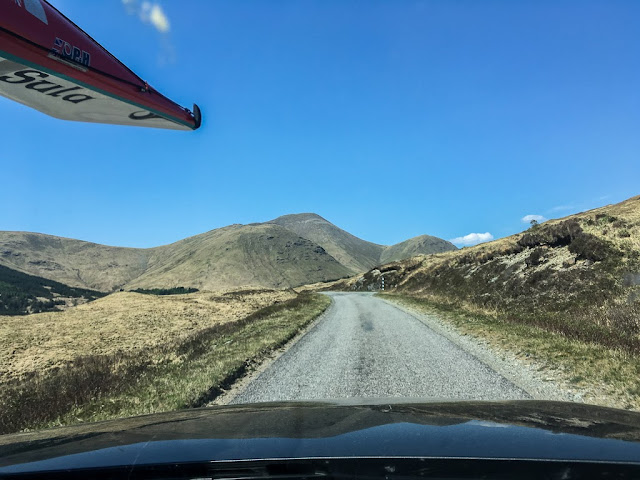 The road to the Ross of Mull isost 60km of twisting single track, fortunately it was quiet and it was a magnificent drive through the mountains to Bunessan where we had arranged to meet the others. One option was to launch at Bunessan and camp at Market Bay on the north coast of the Ross of Mull but I had an updated weather forecast on the ferry which was for F5 northerly overnight which would make a difficult launch from Market Bay (a surf beach).

We decided to camp at the excellent Fidden Farm camp site which has a fantastic view... 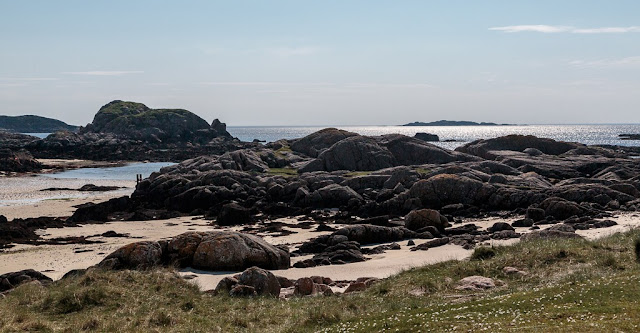 ...over the skerries to the Sound of Iona. 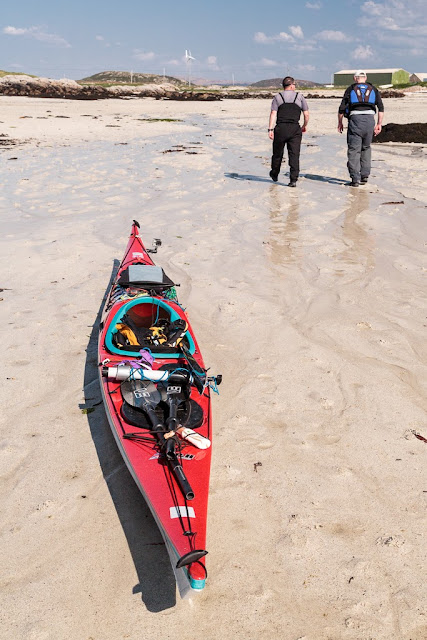 We wasted no time in carrying the boats one by one...

...down the dazzling white sand to the... 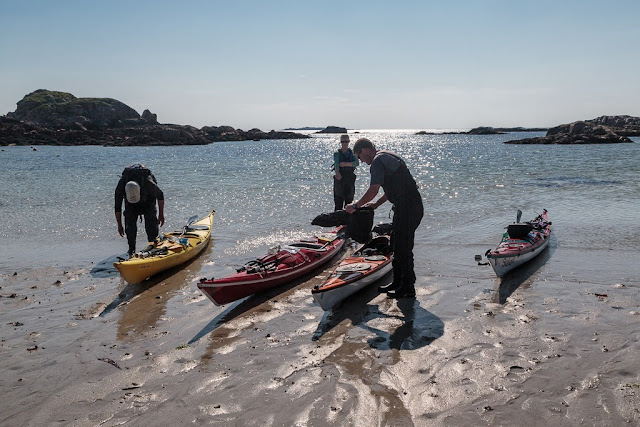 ...sparkling water's edge. We were bound for the magical tidal island of Erraid.
Posted by Douglas Wilcox at 10:39 pm 2 comments: