The name gives the game away... 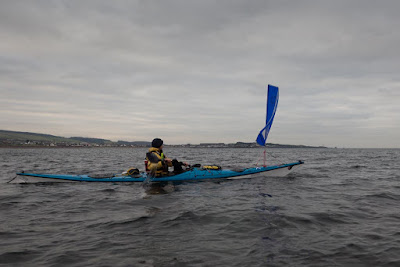 Last Saturday, Tony, Andrew, David, Jim, Phil and I set of from Maidens on the Ayrshire coast. 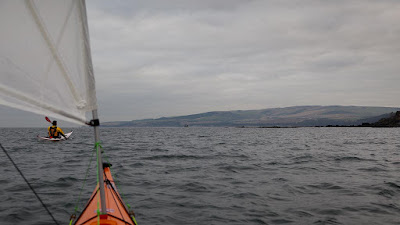 A light breeze soon filled the sails, it is just as well Andrew is a fast paddler. 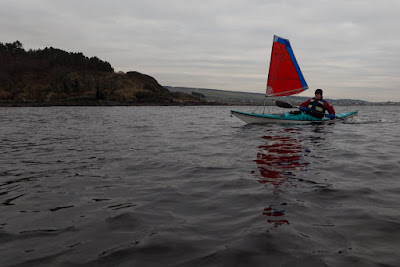 It was not long until we rounded Barwhin Point. 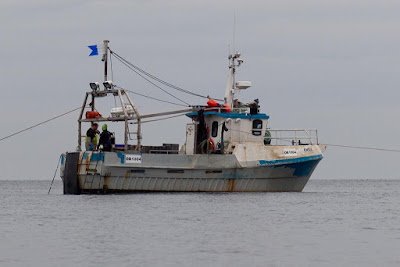 We came across Ensis (OB1004) fishing in shallow water about 300m from the Culzean shore. She is registered in Oban but her home port is Fort William.  The blue and white alpha flag means she has divers down. One emerged as we passed and is standing on the rear deck. I think they were diving for shell fish and the boat's name Ensis suggests she might be after razor clams or spoots (Ensis sp). She was slowly "fly dragging"; winching herself forward between the bow and stern lines. A thick cable from her stern seemed to be dragging something along the sea bed as it was under tension. She is not the first boat we have seen fly dragging with divers at this location.

The landings of razor clams have increased dramatically in Scotland over the last few years. Unfortunately this has been parallelled by the increasing use of illegal electro fishing over the same period and in (2011) the Government Agency, Marine Scotland, produced a document "A REPORT ON ELECTRICAL FISHING FOR RAZOR CLAMS (ENSIS SP.) AND ITS LIKELY EFFECTS ON THE MARINE ENVIRONMENT". 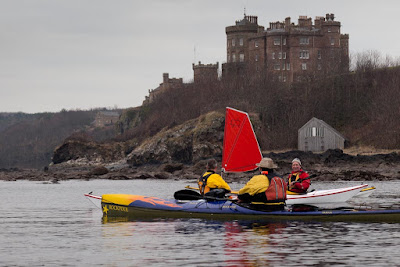 We reconvened under the walls of Culzean Castle.
Posted by Douglas Wilcox at 3:36 pm 3 comments: