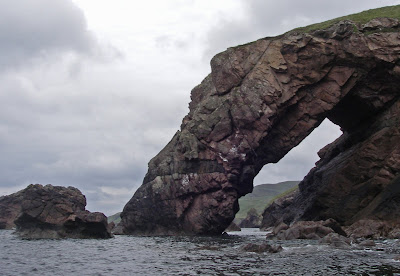 There are few sights more satisfying on a sea kayaking trip than an arch. I especially like ones you can paddle through. You really feel you are interacting with environment when you are under an arch. This one just invited us through. I think part of the attraction is that, just like us, an arch is mortal and will not be there forever.

To my mind nothing defines the interface between land and sea so well as an arch.

This magnificent arch is at the foot of Bloodstone hill on the island of Rum. Green agates are found in this rock. They contain little tiny red flecks of iron, and it is these that give the stone and the mountain its name.

The geology here is very complex, Bloodstone Hill lies at the boundary of granite and Torridonian sandstone. It is also covered with sedimentary conglomerate rocks containing igneous rocks from the eruption which formed the Cuillin of Rum. These sedimentary rocks are then covered with lava flows that are younger than the Rum eruption and which probably came from the later Mull eruption to the south. 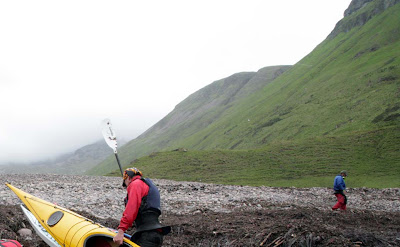 If you look carefully at the top slopes of Bloodstone Hill, you can see where these lavas have flowed over the top of the hill and started to run down ancient river valleys. The lava solidified before it got to the sea and has left steep escarpments.
Posted by Douglas Wilcox at 10:03 pm 5 comments: