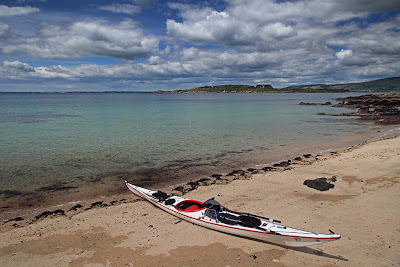 I paddled across Fleet Bay and took a break at the sandy cove of Knockbrex. Not far from the beach is a fine large mansion which was built by a Manchester businessman Mr James Brown in 1895. It was built on the site of an older mansion, which was part of the Selkirk estate but Knockbrex dates back to at least the 1650's when it belonged to the Gordon family. 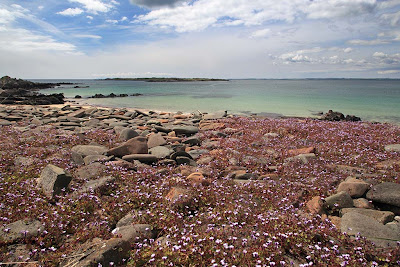 The Scottish novelist, Lucy Bethia Walford (1845-1919), lived here for three years when her father took a tenancy from the Selkirks. She described Knockbrex (which was one of the the finest mansions in these parts): "though unpretending, was very much the kind of house we liked. Every window had a view : on the one hand, of a wild and storm-beaten district, wooded after a fashion on the hillsides, with the hills rising into mountains beyond ; while on the other was the famed Solway Firth, across which we could at times distinguish on the far horizon the faint outlines of the Isle of Man." 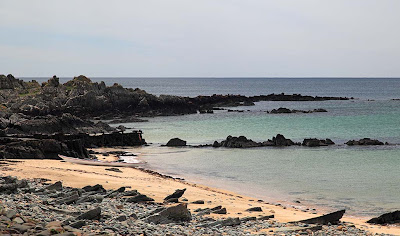 She and her brothers had "arrived at Knockbrex full of the wonders of a sea cave containing fossil remains said to be of great antiquity, of which he had heard as being in the neighbourhood." Despite much searching, she never discovered it. In her book, Recollections of a Scottish Novelist (1910), she recounts an amusing (though a century has not been kind to the humour) story of how she attempted to find it. 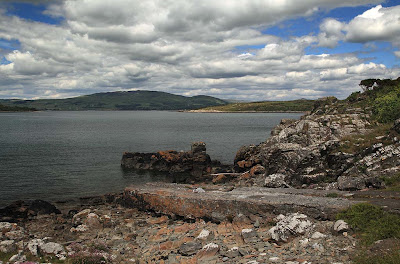 She and her family were all dressed in their finery on their way to a gala when they heard they were passing the house of the elderly man who owned the cave and looked after the fossils. There was a large number of carriages outside the man's house and they thought the fossil museum must be very popular. The house was crowded with men in black clothes and she thought they must be a gathering of ministers, though some looked very young. She became annoyed when her requests to be taken to the owner of the cave were ignored. Finally a young man ushered her in to a darkened room and said "This is the owner of the cave!"

The man was dressed in his Sunday best but was clearly well past his own best as he lay quite dead in his coffin. She recounts "We fled indignantly and precipitately ; nor did we once give way to mirth till far away and out of sight. But we never saw the cave, then or thereafter."

Well Lucy sounds very much like the kind of gal that describes a mansion as "unpretending"!

I have been visiting the Knockbrex shore regularly over the last 40 years and I have never found the cave either. It was a quite lovely afternoon so I decided to take another look for the wondrous cave....