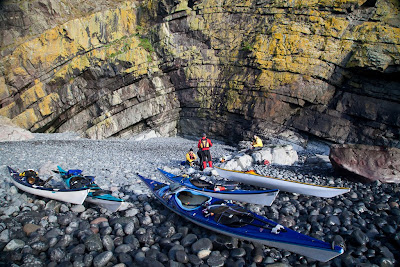 Last Thursday a brand, shiny new P&H Cetus demo kayak arrived at seakayakphoto towers for a long term test. Unlike previous test kayaks that I have reviewed, which have been arranged through Ocean Paddler magazine or by local dealers, this one (and its predecessor) has come direct from P&H. In case readers might be concerned about my impartiality under these circumstances, I already have 4 sea kayaks of my own so don't need a demo kayak to go paddling. It might also be worth reading what I have said about this kayak's predecessor.

P&H boats come really well wrapped and there was not a blemish on this kayak's finish. A really nice thing I noticed is that P&H have gone back to glassing in the foot track mounting screws rather than just drilling the hull, which they have done since about 2004. The decals are also a smart new raised 3D design.

The seat was fitted much lower than the last one, with shims under the cockpit rim. I had previously raised the issue of high seats with P&H and got this reply from Graham Mackereth, boss of Pyranha, the company that owns P&H:

"Doug
I'm very sorry about the seat issue -it's an obvious point that we recognised some time ago and didn't make happen.
I went out to the N.American West Coast Sea Kayak Symp 2 weeks ago and we had some there that were just too high, so as coincidence would have it I came back and issued instructions that all moulds are to be tweaked so seats are no more than 10mm between kayak floor and the lower side of the seat, that's to include the foam support, so hopefully this will get the boats paddling again as they should be. Then I got a copy of your mail, that very nicely reinforces the point.

Anyway its in hand, though I'll no doubt get some that want it higher for performance, but at least adding foam is much easier than lowering the seat.

I really appreciate the input
Graham"
It is very reassuring that P&H are taking account of user feedback in product development.
Now I am sure you are keen to hear about the skeg. This one worked faultlessly and smoothly all day, in fact it was perfect. It hasn't been exposed to fine sand yet but the last one was stiff out of the wrapper, so this is very promising.
I will post a full review of the Cetus, once I have had more time in it. However, my first impressions are that it is very comfortable and easier to get in and out of than a Quest. It has less foot room than a Quest but the 4th hatch is just so useful and a safety feature to reduce cockpit volume. It is much more manoeuvrable than a Quest and is very stable on edge. It is also very stable when not paddling e.g. when photographing or fishing. It is extremely well behaved crossing eddy lines. It is low and handles high winds well. It looks beautiful. I prefer the Quest when on long downwind legs with following swell, as the Quest is less likely to broach and is easier to maintain a fast speed. On the big surf beaches of Coll and Colonsay I prefered the Quest for surf landings. It is much less likely to broach, though the Cetus is very stable in the broached position in front of breaking surf.
In short, there is a great to like about the Cetus. However, in this post I want to concentrate on its use as a photography platform. It is quite simply the best kayak I have ever been in for photography. 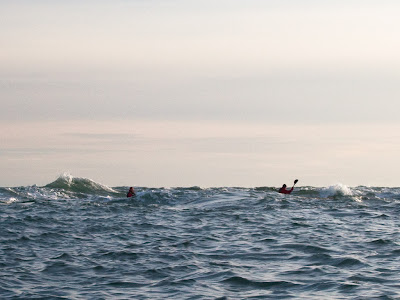 This photograph was taken with £3,000 worth of non waterproof photographic kit. Although I did not take the camera out in the race itself, I have just paddled through that race with the camera in an Ortlieb Aqua Zoom camera bag on deck. In no other boat would I be confident enough to do that in a race of this magnitude. 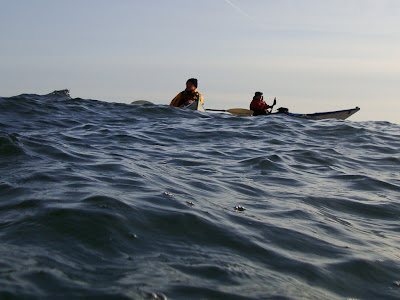 You can see the Aqua Zoom bag on the foredeck. Photo JLW. 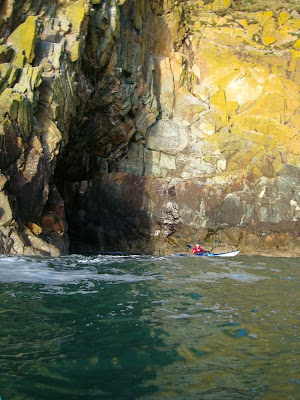 Despite the swell, I took photos... 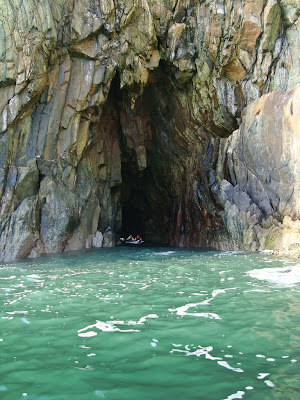 ...inside this cave. Photos JLW.
The P&H Cetus is a superb photography platform.
Posted by Douglas Wilcox at 8:46 pm 4 comments: