Better Days in the Sound of Islay! 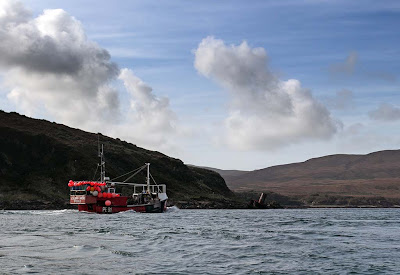 We thought we were super fit kayakers, flying along as the coast of Islay slipped astern at 14km/hr. It was only when the lobster boat Calon Mor zipped past us that we realised that the tide was doing almost all the work. PE91, Calon Mor was built in Poole in 1983. She is a wooden boat 11.8m long and she used to have a forward wheelhouse when used as a trawler in England then Wales. She is currently owned by Kenneth Woodrow from Bruichladdich, Islay.

Then, beyond the shipshape Calon Mor, we noticed something lying at an odd angle on the shore of Rubha a'Mhill, just south of Bunnahabhain. 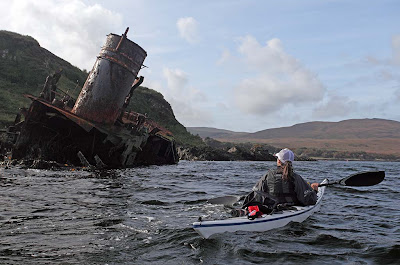 It was the wreck of the 328 ton Fleetwood trawler Wyre Majestic. On the night of October the 18th 1974 she was steaming in the company of her sister ship the Wyre Defence to Fleetwood. There was no berth to offload their fish at Oban and they were obviously in a hurry to get their catch to a market. 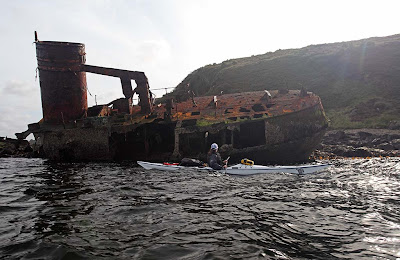 She was making 10 knots and with a spring tide of 8 knots, she hit the rocks at a combined speed of 18 knots. Fortunately there was no loss of life. At the time of the collision her skipper was below decks and her bosun who was at the wheel admitted he was under the influence of drink. Her skipper and two crew stayed aboard for 10 days, until the next spring tides, in an attempt to refloat her. She stayed firmly stuck on the rocks despite attempts by her sister ship, a tug and the Port Askaig lifeboat to tow her off. 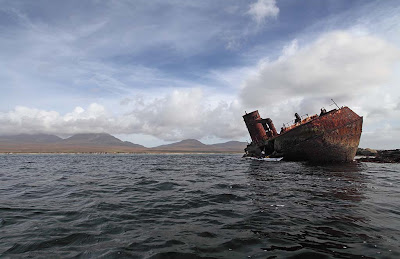 Her bow and bridge have now broken away, leaving only the sad and rusting remains of her stern and midships. She serves as a warning to all mariners to treat the Sound of Islay with the greatest of respect.

An interesting footnote is that the Wyre Majestic was built by Cochranes of Selby in Yorkshire, the same yard, which built the main Islay ferry, the MV Hebridean Isles.
Posted by Douglas Wilcox at 4:58 pm 2 comments: