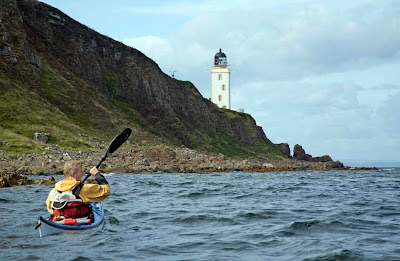 The Outer Light of Holy Island was built by David A and Charles Stevenson in 1905. Its white light flashes twice every 20 seconds and was a familiar night time sight to me some 50 years ago when I grew up in Ayrshire, on the other side of the Firth of Clyde. However, its apparent constancy is but a transient flash compared to the ancient rocks upon which it is built. 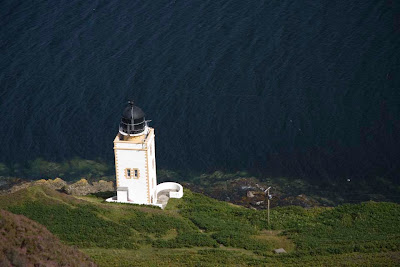 This view of the lighthouse is one the monks at the Samye Ling Buddhist community on the island would prefer pelagic sea kayakers not to see. They post NO LANDING signs and expect you to to report to them at one landing spot on the north of the island so that you can be instructed on how to behave on your visit.

Tony and I were fortunate to meet no monks and went on our way undisturbed. We paddled on below the eastern cliffs of Holy Island, which bear witness to the geological forces that created the Earth. The old red sandstone at the base of the cliffs is 400 million years old and was formed when Holy Island was part of the Old Red continent, which was then situated on the equator. In comparison our own species is a mere 200,000 years old yet we think we own the Earth. We pondered on the nature of it all. We wondered why the monks seem so possessive of this wonderful island, which was a Holy Island to Christians for 1200 years before they bought it. What is their intention or motivation for wishing to close the island? What is the nature of their attachment to the land? Are they aware that whatever their motive they are not above the Scottish Land Reform Act?

Whatever, Tony and I concluded that the way to enlightenment through sea kayaking was for us closer to the truth than the way of any organised religion that seeks ownership and control. The ancient rocks of Holy Island will outlast mankind and then all of human enlightenment will be less substantive than a single grain of old red sandstone.

We paddled on and for the rest of our trip observed Scotland's Forbidden Island of Holy Island only from the sanctuary of the sea. This blog is the only (transient) evidence of our visit and passing.