Navigation and spice in the Sound of Islay. 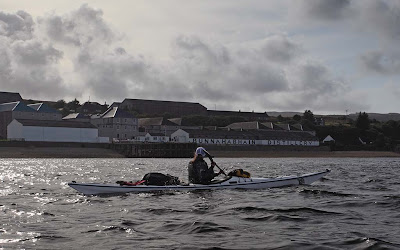 Proceeding up the Sound of Islay we soon came across yet another distillery. What a wondrous isle Islay is! Sea kayak navigation is so easy here. Even we (without a single navigation qualification between us) knew we had arrived at Bunnahabhain. There has been a distillery here since 1881. The fine malt whisky produced here is lighter and less peaty than the whiskies produced by distilleries elsewhere on Islay. This is because the water rises from a limestone spring and is piped directly to the distillery, without gathering peat in surface rivers and lochs. The 18 year old bottling has been described as follows: "The voyage ends with dry notes that are interspersed with mixed spices fading magnificently into a light salt and sherry finale."

Despite its spicy name and overtones, I do not think this whisky distillery has Indian owners. Bunnahabhain marks the end of the road and we now paddled past one of the wildest and most remote corners of Islay. 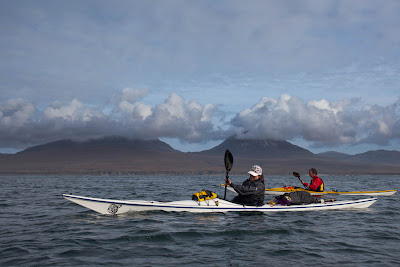 To the east, the modesty of the heaving Paps of Jura was covered by a decent layer of cloud. 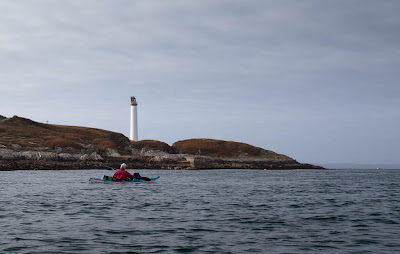 Our destination was Ruvall lighthouse which is perched on the end of Rubh a' Mhail. An electricity supply was put in to the lighthouse in 1981. The poles and cables were flown in by helicopter but the pilot had a lucky escape when his rotor hit one of the poles that had already been erected. 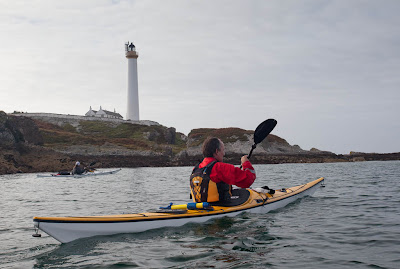 A basalt dyke runs through the headland to the north of the lighthouse. Its continuation can be seen on the other side of the Sound of Islay, marching up the hillside of the Paps.

The lighthouse was built in 1859 by David and Thomas Stephenson. The tower is 34m high. Every 15 seconds there are 3 quick flashes. The light is white with the exception of the NW quadrant which is red. The lighthouse has been automated since 1983.

Rounding the point, we now left the Sound of Islay and headed west along the most remote part of Islay's incredibly varied coastline.

What would we find next?
Posted by Douglas Wilcox at 5:53 pm 5 comments: