All the King's horses... 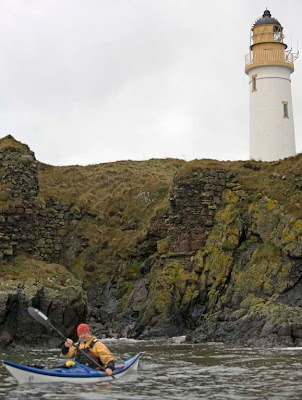 Most people paddling past the crumbling remains of Turnberry Castle will hardly notice its existence. Their gaze will be drawn instead to the lighthouse which is built within the castle's ancient walls.

Yet in its day, it was a magnificent stronghold, which was built on a promontory, surrounded on three sides by the sea. On the seaward side, the castle was built over over an inlet with a cave at its rear. In times of siege the castle could be resupplied from the sea. Ships could enter the inlet beneath a great arch in the castle's walls. A portcullis could be lowered behind the ship and provisions could be carried up through the cave into the heart of the castle. A reconstruction of the castle in its heyday can be seen on the local town of Maybole's website. 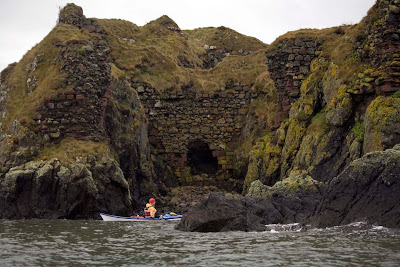 Tony paddled right into the inlet which is now mostly filled with rubble from the collapsed walls of the castle. You can still see the lines of the arch from the carved stones which formed its foundations on either side of the inlet. The entrance to the cavern, which gave access to the castle, is also seen.

The castle dates from the 12th Century and was the seat of the Earls of Carrick. One of the Earls died leaving a young countess as a widow. One day she spied a handsome knight making his way past the castle. She became so infatuated with him that had him kidnapped upon his return. He turned out to be a Norman nobleman, Robert de Brus, Lord of Annandale. She persuaded him to marry her and their son Robert the Bruce became Earl of Carrick. Later he became King Robert I of Scotland and defeated Edward II of England at the battle of Bannockburn in 1314.

The Earldom of Carrick became part of the titles of the Scottish monarchs. After the Union of the Crowns in 1603, when King James VI of Scotland became James I of Great Britain, the Earldom of Carrick passed into the linage of the British Royal Family. The current holder is Prince Charles whose full title is prince of Wales and earl of Chester, duke of Cornwall, duke of Rothesay, earl of Carrick and Baron Renfrew, Lord of the Isles, and Prince and Great Steward of Scotland.

The strategic position of Turnberry was again recognised in the two World wars when an RFC then RAF airfield was constructed here. Although mainly a training aerodrome, its Beaufort, Hampden, Venture, Beaufighter and Hudson torpedo planes and maritime bombers played a role in the defence of the Clyde's vital shipping routes in WW2.