Up before the surf dudes on Tiree's Maze. 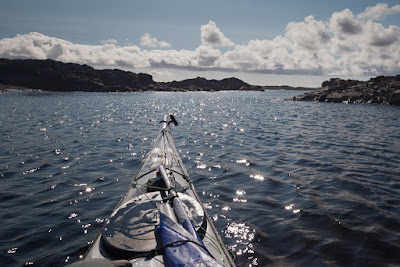 Leaving Hough Bay, we paddled through the skerries that lie off the westernmost point of Tiree, Rubha Chraiginis. The north going tide was still flowing through the channels against us. 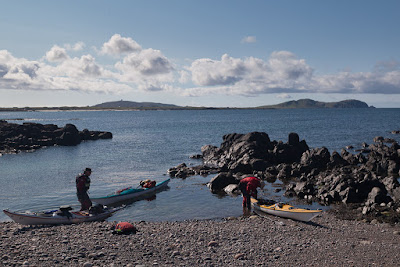 We stopped for a rest in this little inlet on the sheltered south side of the point. Unfortunately the beach below the water was very steeply shelving with very slippy boulders. I half fell out of the kayak and it took both David and Phil to recover me. It was the worst wrench to my bad knee since the operation and it could have been serious if it was not for their speedy help. Thanks guys!

From the top of the rise behind the beach we could look back at the way we had come with the Cuillin of Skye in the distance.

21km away to the SSW we could just make out the Skerryvore lighthouse on the horizon. 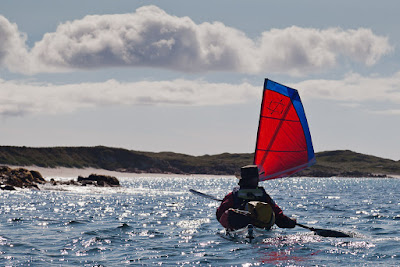 We now set off in a southerly direction down Tiree's west coast. The NNE wind was cross off at "The Maze" as the surf dudes call Traigh Thodhrasdail. The surf was about 4 feet so there were a lot of boardies emerging from their camper vans for what, for them, was an early morning surf (but we had been paddling for 2.5 hours! David and I whipped up our sails and we could see several dudes rubbing their eyes in disbelief! 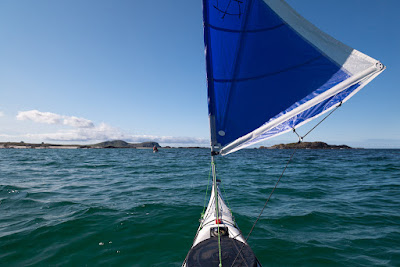 It was great fun sailing and paddling along the beach, just beyond the surf zone. Judging by the stares, the surfers had clearly never seen a sea kayak with a sail! 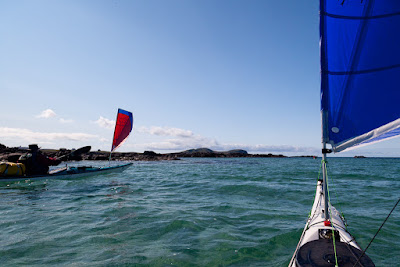 All to soon we left the beautiful Maze beach and the surf dudes behind.
Posted by Douglas Wilcox at 9:01 pm 2 comments: