The stories of contrasting graves on Oronsay 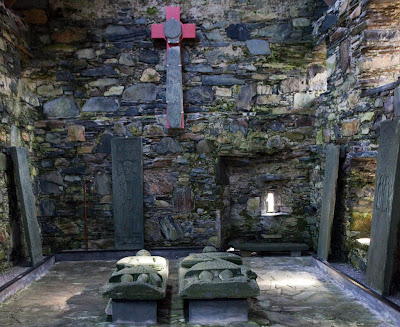 The Prior's House at Oronsay has recently been made weather tight and the ancient grave slabs, which were previously exposed to the elements, have been moved inside. The grave slabs of two warriors lie on the floor but the others are arranged vertically around the walls. 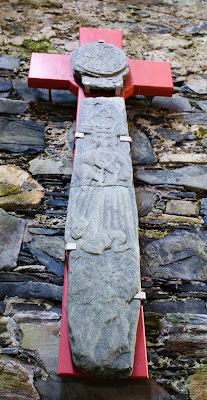 High on the east wall the remains of another cross have been reassembled.

Beneath, stands the grave slab of one of the Priors. The inscription reads:

'Here lies Sir Donald MacDuffie, Conventual Prior of Oransay, who died in the year
155-'

It is known that he died after a long illness in 1554 so it is likely that the slab was carved in expectation of his death but the final digit of the year was never added. 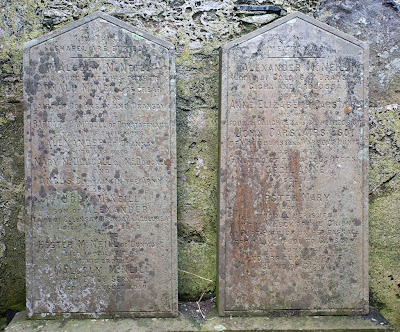 These two memorials stand in the McNeill family mortuary. The inscription on the right hand one reads:

In memory of / Alexander McNeill / Laird of Colonsay and Oransay / Gigha and
Ardlussa / aged 59 / Anne Elizabeth Carstairs / his wife / fourth daughter and coheiress
of / John Carstairs Esqre / of Woodhurst and Warboys, Hunts / aged 47 / and
two of their daughters / Cecil Anne / aged 17 / and / Hester Mary / aged 6 / who all
perished / in the wreck of the "Orion" / at Port-Patrick on her passage / from
Liverpool to Glasgow / 18th June 1850 / and are buried in the / Island of Gigha 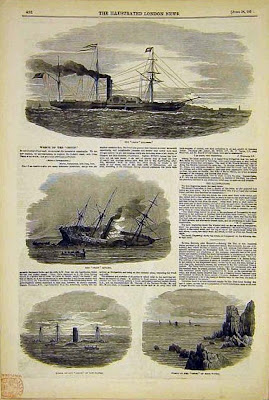 The Orion was an 890 ton steam paddle steamer which was wrecked on the rocks at the entrance to Portpatrick harbour on 18/06/1850. She had 38 crew and 212 passengers. Despite sinking in full view of the town and the efforts of local fishermen, 41 lives lost. There was such an outcry following the sinking, as reported here in The Illustrated London News, that henceforth British ships had to carry enough lifeboats for every passenger. 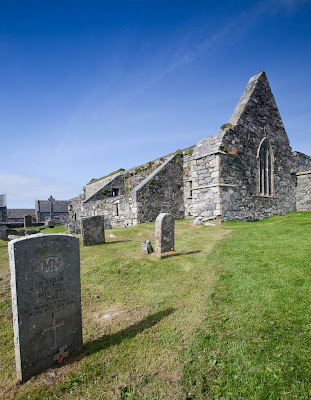 In the graveyard there are several graves to unknown sailors. The inscription of this one reads:

Oronsay and Colonsay by their position to the west of Scotland have been where many sailors lost in the Atlantic have been washed ashore. 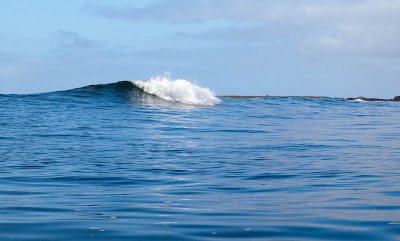 Due to the swell, we had been unable to land on Eilean nan Ron, to the SW of Oronsay. I had hoped to find the simple wooden cross on the machair which marks the grave of Edmondo Armando Sottocarnola. It is situated near the old seal hunter's hut which you can see to the right of the wave. 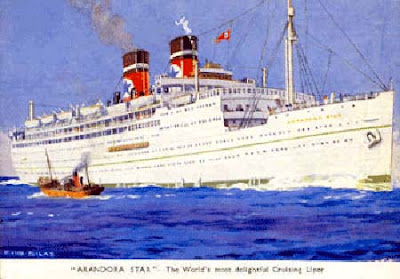 Edmondo was an Italian civilian who was being deported to Canada with other Italian and German civilians in 1940. They were on the Arandora Star when she was sunk on 1/7/1940 by the German U-boat U47. Of about 1736 people aboard, about 867, almost half, were drowned.

The original wooden cross marking Edmondo's resting place decayed long ago but the late Finlay McFadyen of Colonsay made a replacement in October 2002.
Posted by Douglas Wilcox at 10:16 pm No comments: