Crossing to St Kilda, the islands at the edge of the World. 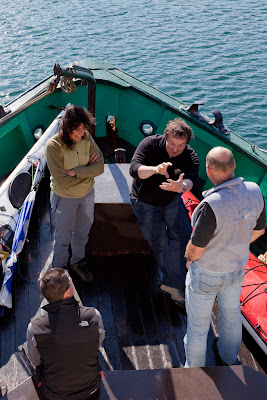 The morning of Sunday 12th June dawned fair and after an extensive Cuma breakfast, we took some air upon the deck to allow our stomachs to settle. Ken explained to the others how he had managed to hold on to the toast rack with the very last slice of toast! 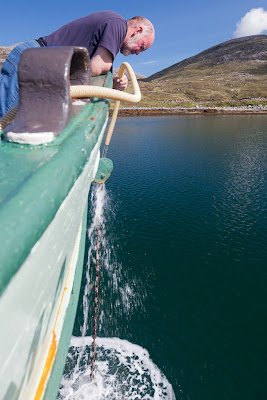 Murdani listened intently to the weather forecast. It was not looking good at the end of the week and the wind this evening was forecast to get up to 19-25mph from the NE but drop on Monday before getting up again from the SW on Tuesday. Murdani decided to go for it. He was confident that Village Bay would provide a sheltered anchorage in a NE wind. The anchor was weighed and look how carefully the chain is cleaned of mud. 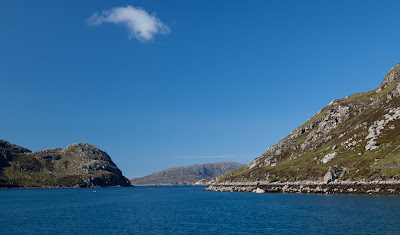 Soon we were heading for the Atlantic from within the confines of a narrow sea loch without an open horizon. 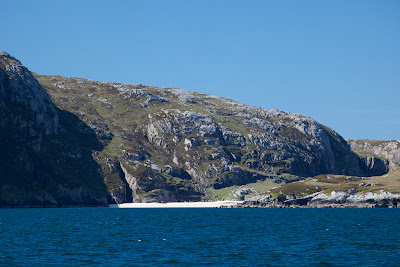 The island of Scarp, with its dazzling white sand beach, was our gateway to the open ocean. 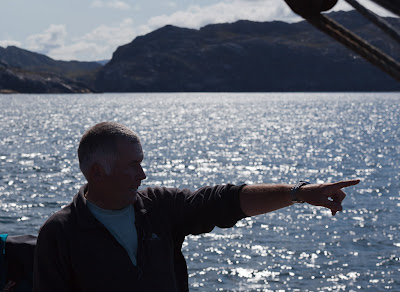 Gordon was delighted we were heading WSW to St Kilda. The crossing from Scarp to Hirta is 87km! The empty Atlantic horizon stretched in front of us without a hint of the islands at the edge of the World. 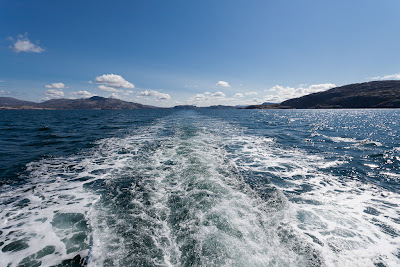 Behind us, the west coast of Lewis fell away as the Cuma's bow rose to the Atlantic swells. 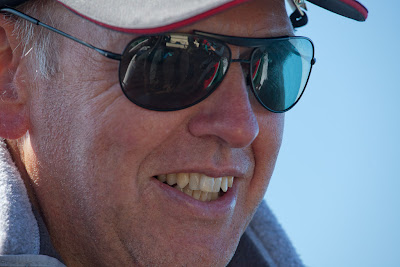 We chatted excitedly on the long crossing. Donald Thomson led the first return trip to by sea kayak to St Kilda 20 years ago in 1991. He modestly answered our many questions about such a bold trip. It turns out that Donald has made return trips to all the Scottish islands apart from one!

At first we could hardly distinguish St Kilda from the clouds but gradually the dramatic cliffs took form as they rose above the horizon. We then realized that these were the highest sea cliffs in the British Isles, big enough to generate their own weather system! From the left we saw Dun, Hirta, Soay, Boreray and Stac an Armin. We were humbled that our ancestors made this crossing and colonised the islands 4,000 years ago!

Our final approach would take us round the north of Boreray and Stac an Armin.
Posted by Douglas Wilcox at 7:00 am 2 comments: