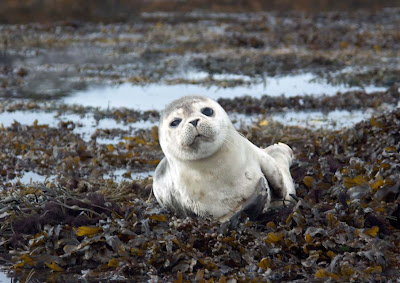 We spotted Sammy, a grey seal pup, through a gap in the skerries in Loch Moidart. Its mother was basking on a nearby rock. We did not speak and moved on silently, leaving them undisturbed.

Hundreds of thousands of other seal pups are not so fortunate. I have no doubt that my ancestors did this sort of thing on a small scale to survive. I also know that some of my ancestors were whalers. Again they did this to survive.

Part of the evolution of human society and the development of our humanity is surely to reach an awareness that the other animals that we share this Earth with should not be abused. We should respect them and if we do not need to slaughter them to survive we shouldn’t. Of course this seal cull is really just the tip of the shitty iceberg of the way in which our species treats this world and everything in it. What a far sighted lot we are.

Fortunately for Sammy, here in Scotland sealing and whaling are not seen as an essential part of our heritage and identity and, as such, there is no call for their continuance on cultural grounds. There is still a small number of hunters who shoot deer and birds for sport but perhaps not so many as in North America. Maybe there is a cultural difference and need in some parts of Canada but most photos of sealers I have seen are of people of European origin, many of them probably of Scottish decent. Does the economic survival of one of the wealthiest countries in the World really depend on this slaughter?

I am no vegan but I try to meat that has come from animals that have been well treated and humanely killed. I avoid 99p chickens!

Rolf has something to say as well.