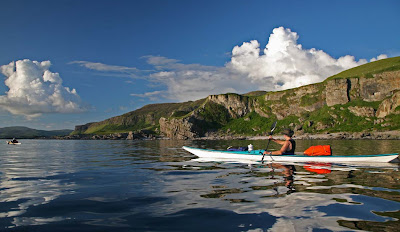 Regular visitors to this blog have expressed some concern for our livers and our ability to continue to find oases of refreshment in the wilderness. I thought it wise to post about a day in which we did not manage to find such an establishment. Despite this, we still had an enjoyable paddle, though we all felt the effects of a drouth which came upon us as an unexpected Scottish sun beat mercilessly down on us. (There was no thirst the following day due to the truly torrential nature of the precipitation.)

Let me continue with our summer adventure. After paddling the Wilderness coast of Mull we headed across Loch na Keal for Inch Kenneth ,which in great contrast to the Wilderness, is a remarkably fertile island. Indeed, but for the lack of a pub, some might say it is as near to Paradise as you can get to on this Earth. 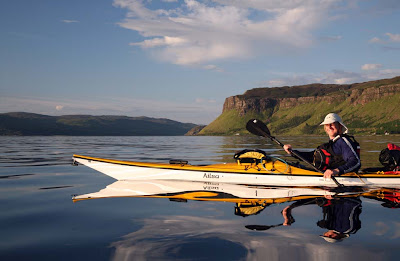 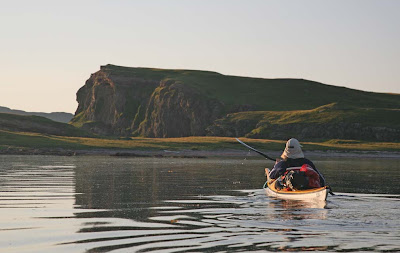 Inch Kenneth at last, after a long and fantastic day's paddling.

On Inch Kenneth we met up with Mike again. He had chosen to have an easy day there as his arm was very stiff after having been bitten on the hand by a venomous snake during a South African adventure. Despite an easy day, he caught a 5lb pollock and spent the rest of the day in the hot sun cooking and eating it! It's a tough life when you are on location for seakayakphoto.com!
Posted by Douglas Wilcox at 11:45 pm 5 comments: