Of light and time and relative dimensions in space. 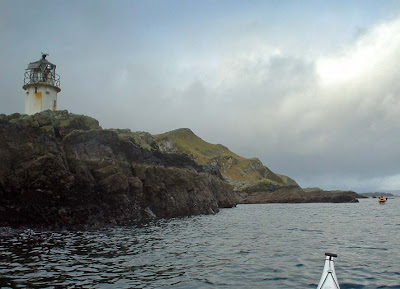 Next to castles, my favourite maritime buildings are lighthouses. On Saturday we paddled past the Rubh an Eun light (NS114526) on the east side of Glencallum Bay which is on the south of Bute in the Firth of Clyde. It has a red flash every six seconds. It was opened in 1911 and, although automated, it still looks like a proper lighthouse. Many of the smaller Scottish lights are being replaced by standard, square, prefabricated towers which look much like a TARDIS which has landed somewhat off course. A few stones at the head of Glencallum Bay are all that remain of a once bustling community that even had an inn. Time has all but erased evidence of former occupation of this now lonley spot. We shared it only with a seal and some eider ducks.
Posted by Douglas Wilcox at 10:28 pm 2 comments: