Birlin about Castle Tioram with Julius Caesar in Loch Moidart. 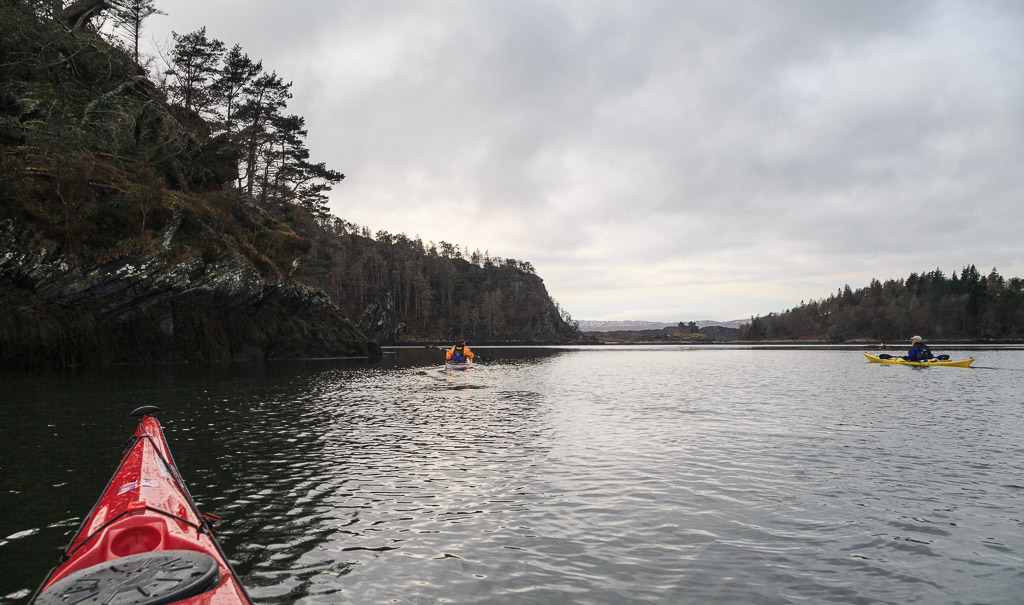 When we rounded the north end of Shona Beag there was very little water left in Inner Loch Moidart. We had hoped to paddle round the east side of Eilean an Fheidh (deer island) but there were only inches of water left so... 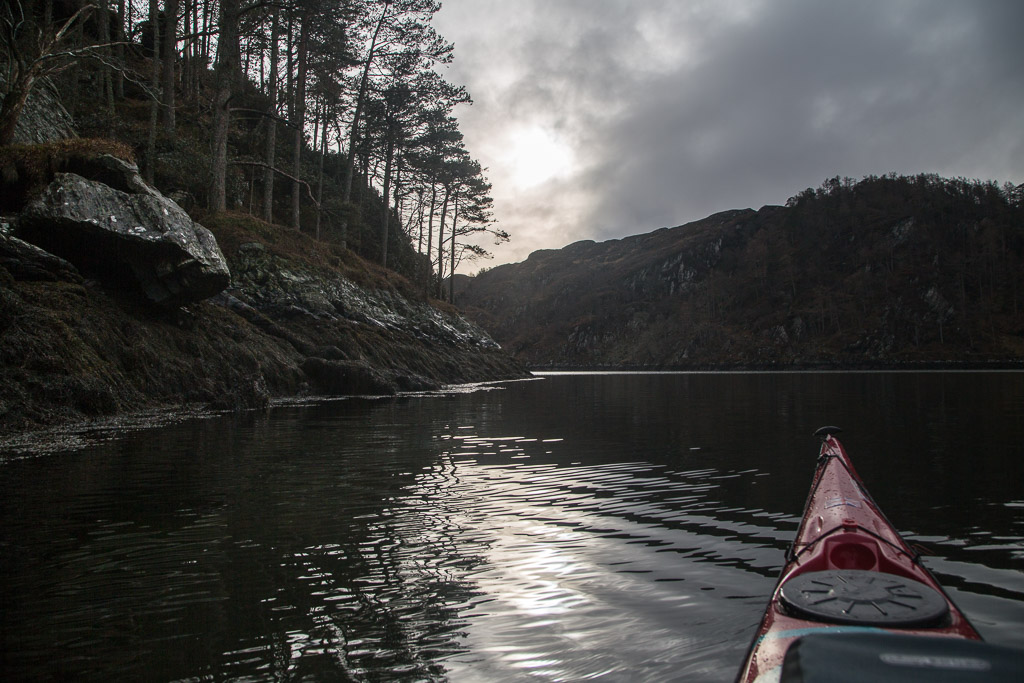 ...we paddled down its north side then... ...followed the deeper water along the south shore. It was here that we caught sight of Tioram (pron. cheerum) Castle. I always associate Tioram Castle with the birl of the bagpipes because on my first visit,  there was a piper playing at the foot of the castle wall. He was not a local, in fact he was on holiday from Nova Scotia! The sound of the pipes echoing from the castle walls and the misty cliffs round lonely Loch Moidart was spine tingling. I nearly expected to see the Young Pretender himself being carried up the loch in a birlinn.

Back to the present, the scenery was amazing which was just as well as our energy levels were seriously ebbing. This was unsurprising since we had replaced first luncheon with a stiff paddle against the tide. 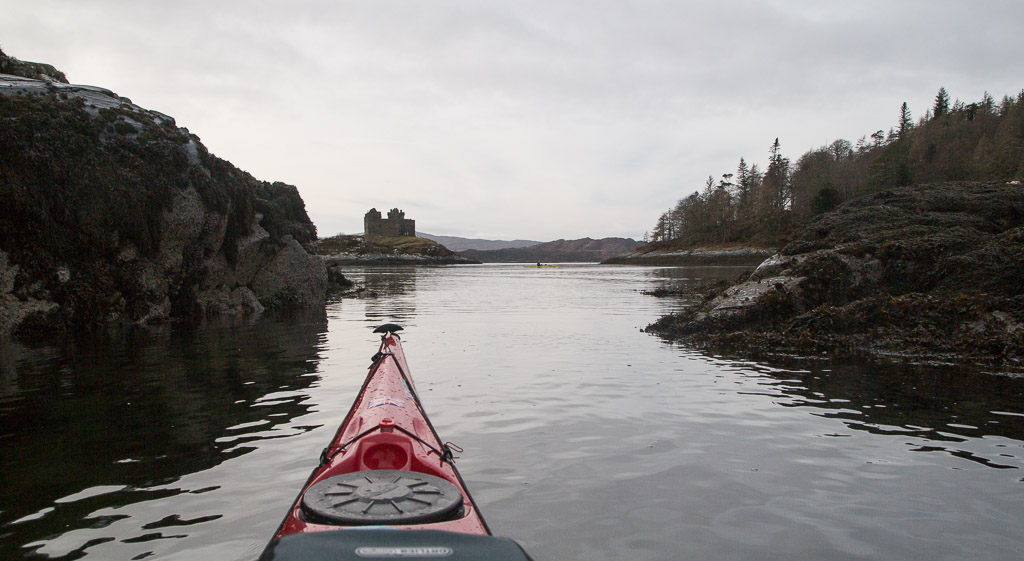 The ebb tide pulled us steadily through the gap... 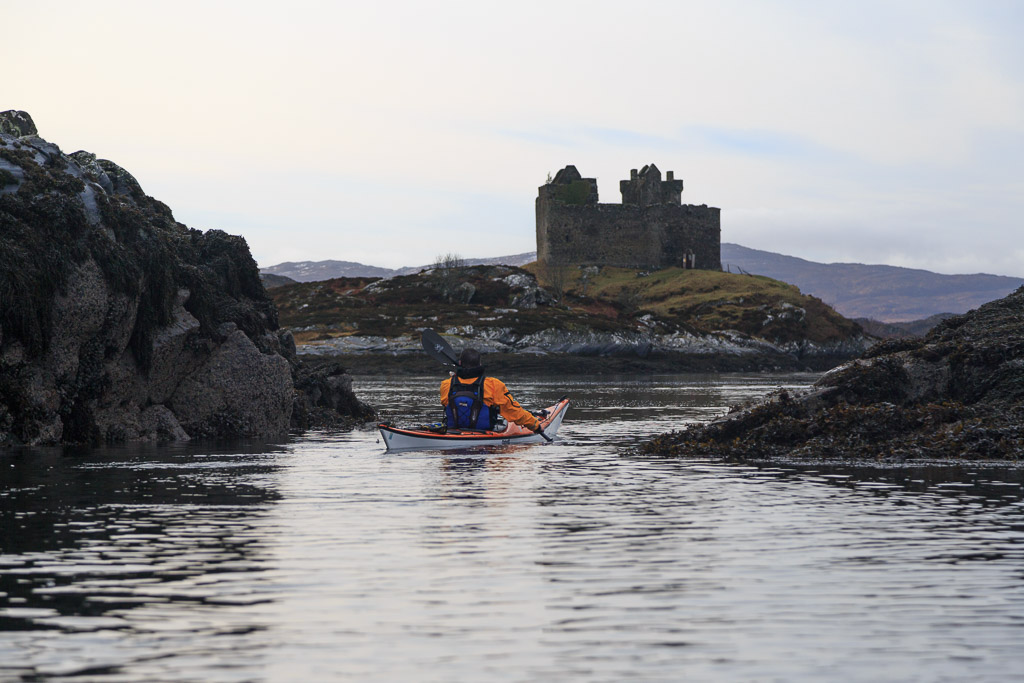 ...between the shore and Sgeir Srath Luinga. It did birl us about a bit but in the most gentle way. 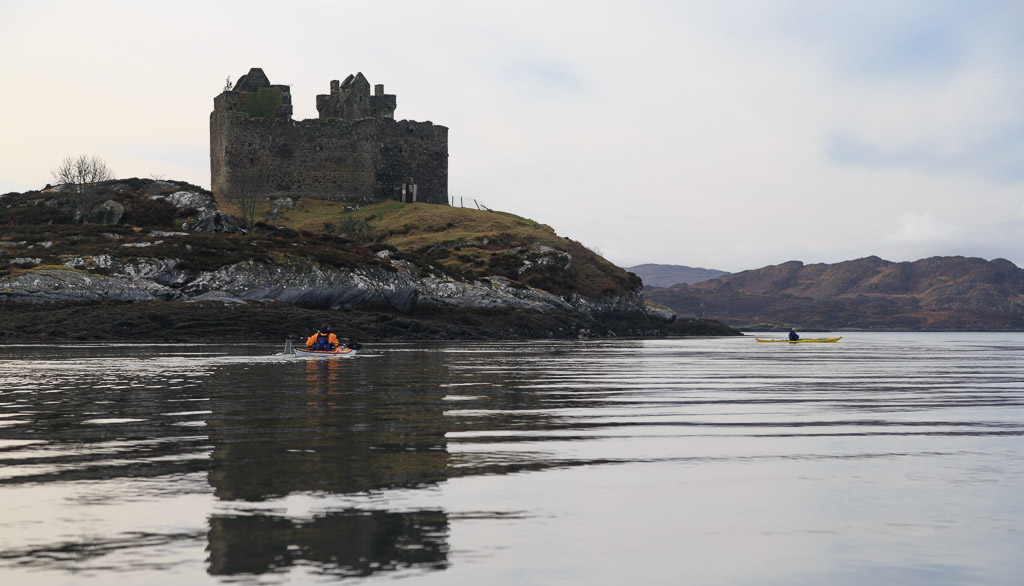 The ebb then carried us under the grey walls of Castle Tioram, which sits on a tidal island on the south shore of Loch Moidart. It was the ancestral home of  Clan Ranald from the 14th century. The family owned the castle until the early 20th century, though it has been a ruin since  the early 18th century. The castle currently belongs to a Scottish businessman, Lex Brown, who has been in a long battle with Historic Scotland to restore the building to a habitable state. 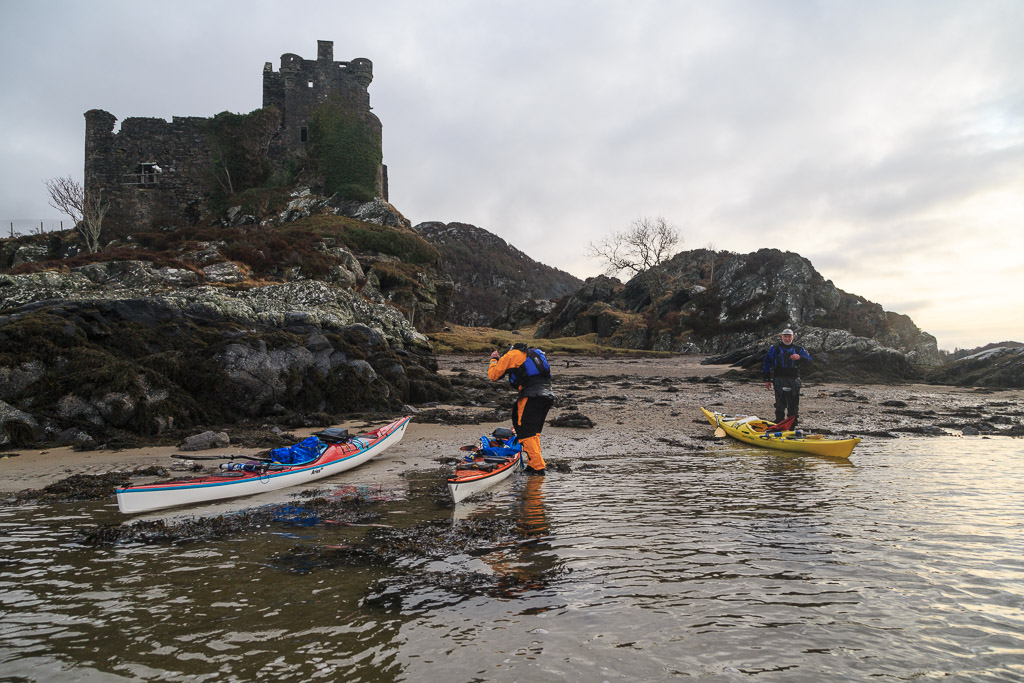 Unfortunately a 300 year battle with the elements means that the castle will need a bit of doing up!

We landed on a little beach to the NW of the castle island. No doubt it was from here that Clan Ranald birlinns set off to raid neighbouring clans. Celtic birlinns are similar to Viking longships but predate them by about 800 years. Julius Caeser described Celtic birlinns in detail and reported them as being superior to Roman galleys in his book the Gallic Wars Book 3 (56 B.C.E.).

"For their ships were built and equipped after this manner. The keels were somewhat flatter than those of our ships, whereby they could more easily encounter the shallows and the ebbing of the tide: the prows were raised very high, and, in like manner the sterns were adapted to the force of the waves and storms [which they were formed to sustain]. The ships were built wholly of oak, and designed to endure any force and violence whatever; the benches which were made of planks a foot in breadth, were fastened by iron spikes of the thickness of a man's thumb; the anchors were secured fast by iron chains instead of cables, and for sails they used skins and thin dressed leather. These [were used] either through their want of canvas and their ignorance of its application, or for this reason, which is more probable, that they thought that such storms of the ocean, and such violent gales of wind could not be resisted by sails, nor ships of such great burden be conveniently enough managed by them. The encounter of our fleet with these ships' was of such a nature that our fleet excelled in speed alone, and the plying of the oars; other things, considering the nature of the place [and] the violence of the storms, were more suitable and better adapted on their side; for neither could our ships injure theirs with their beaks (so great was their strength), nor on account of their height was a weapon easily cast up to them; and for the same reason they were less readily locked in by rocks. To this was added, that whenever a storm began to rage and they ran before the wind, they both could weather the storm more easily and heave to securely in the shallows, and when left by the tide feared nothing from rocks and shelves: the risk of all which things was much to be dreaded by our ships." 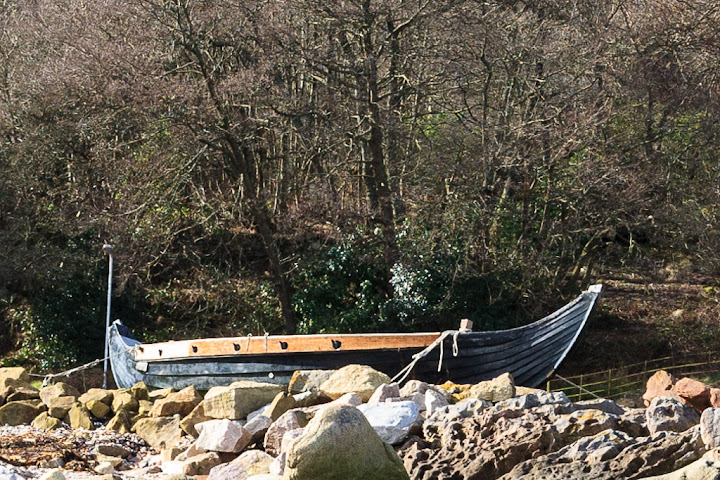 This is a photo a a small, modern recreation of a birlinn. We saw it at Corrie in Arran in March 2008. 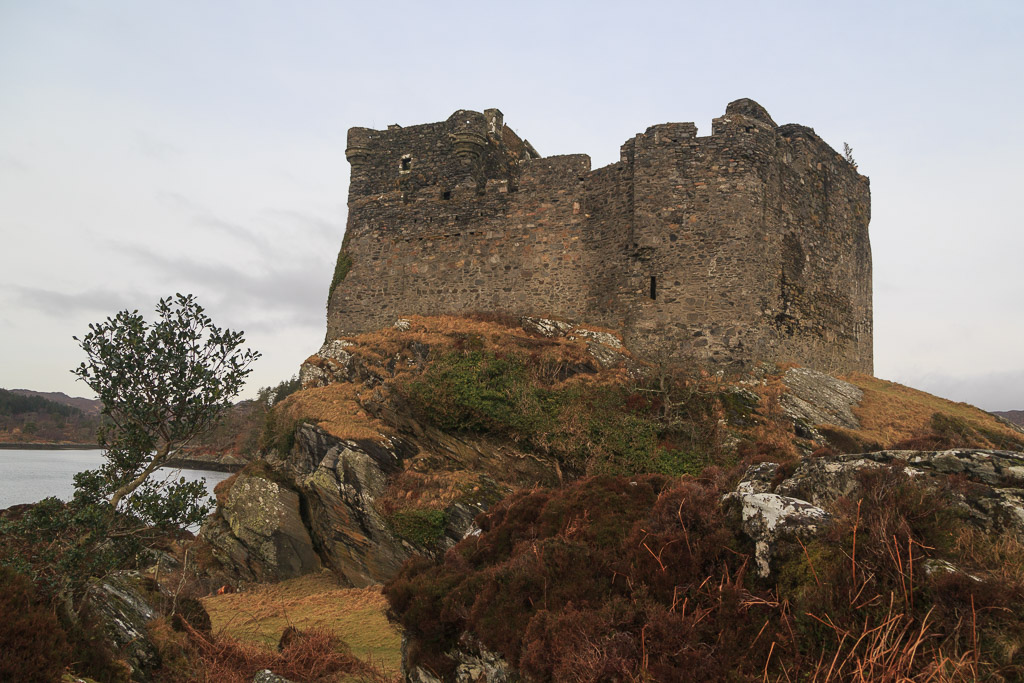 We enjoyed a combination of first and second luncheons under the castle walls and so we birled out an extra generous dram of Jura... 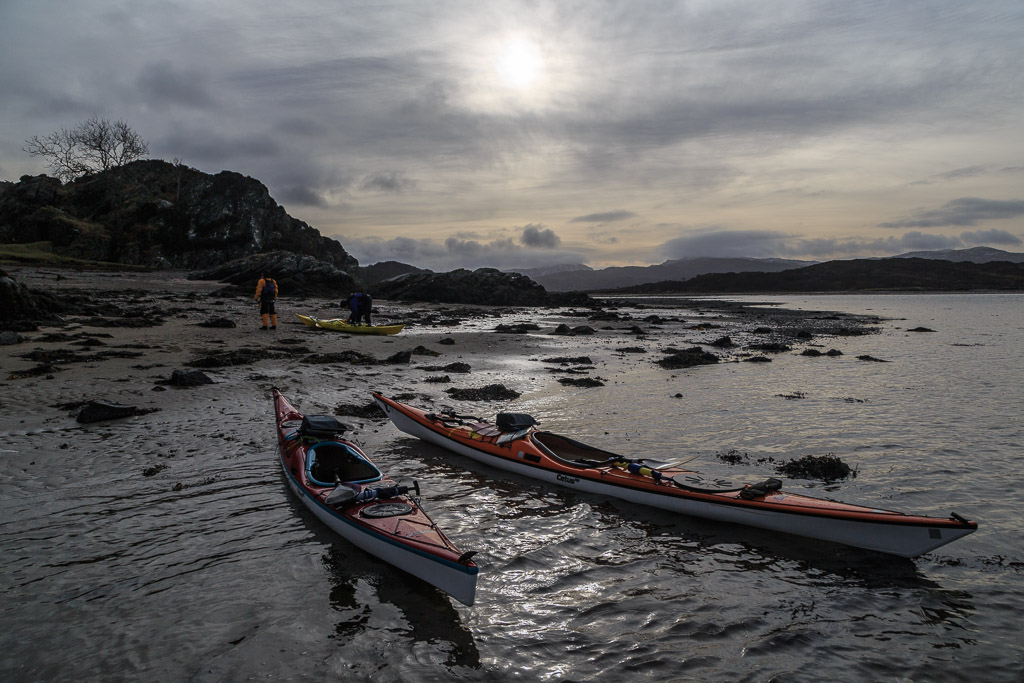 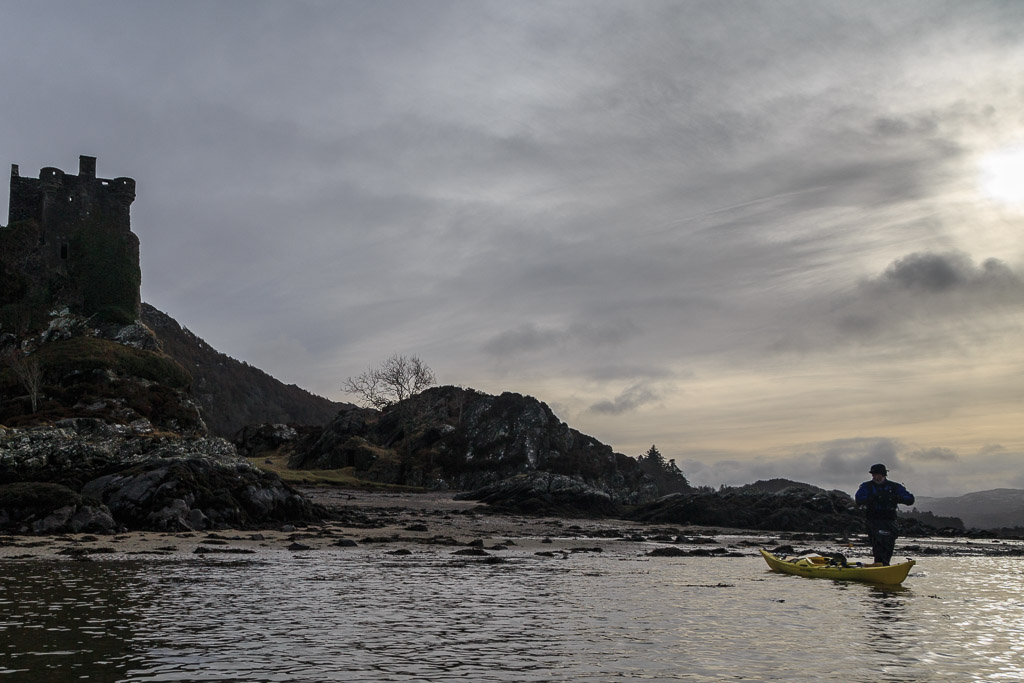 
Posted by Douglas Wilcox at 4:27 pm No comments: