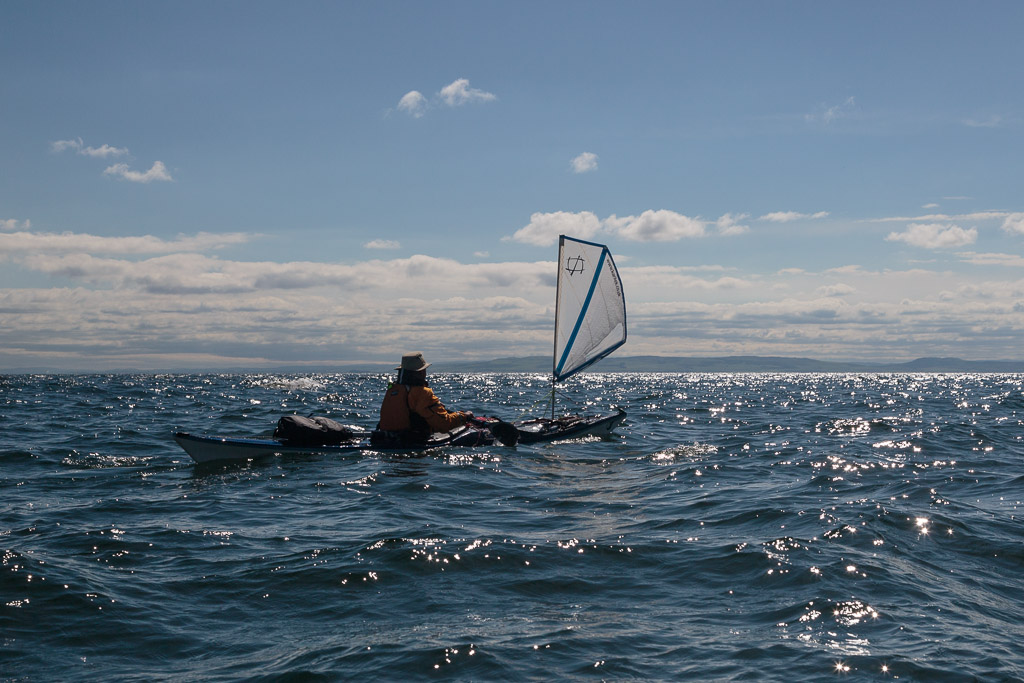 From Whiting Bay we enjoyed a downwind blast with... 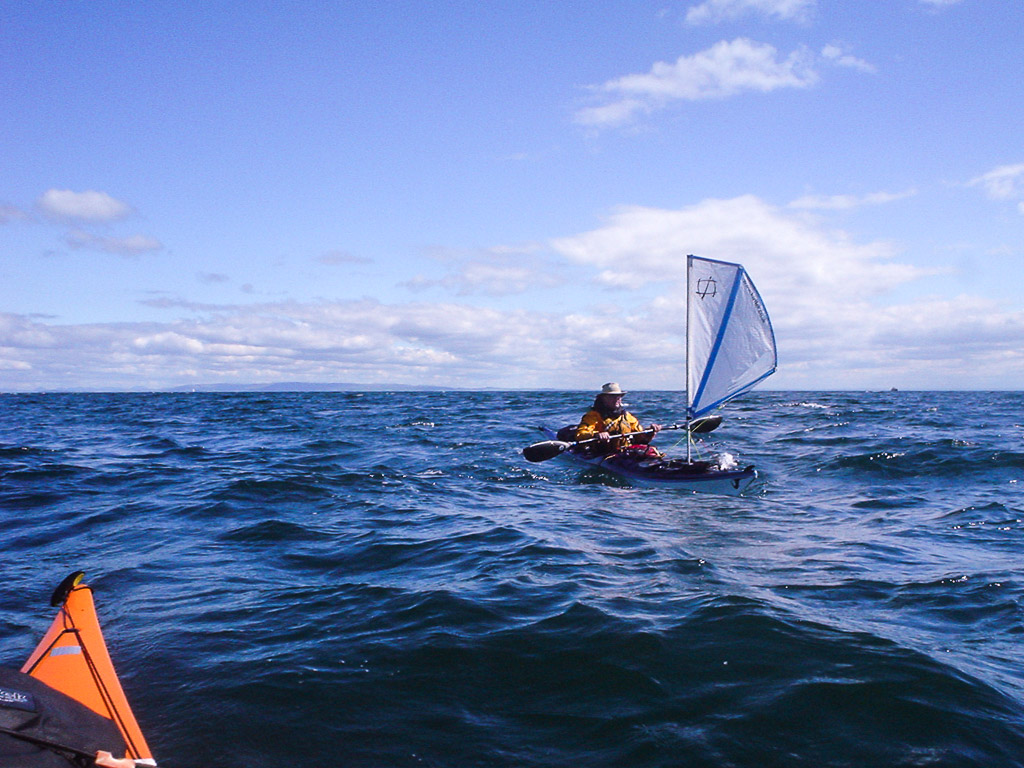 ...Mike and I having our sails up. 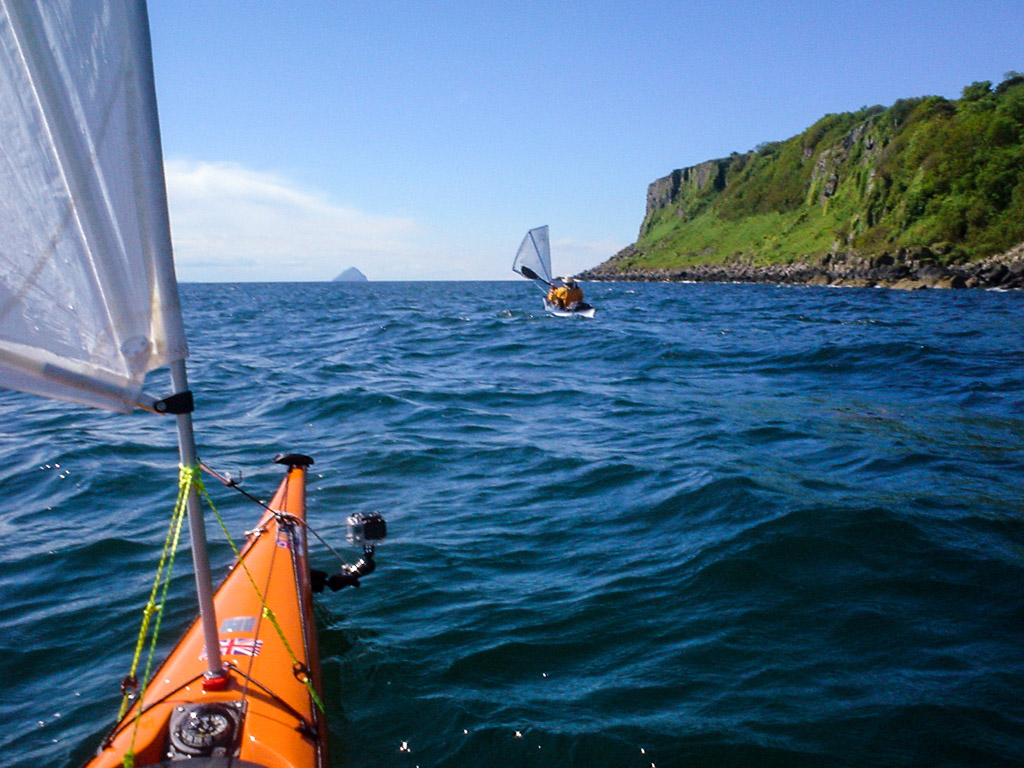 Until we got to Largybeg Point  (where we caught sight of Ailsa Craig) Ian managed to keep up by paddling hard while Mike and I were only doing paddling lite! 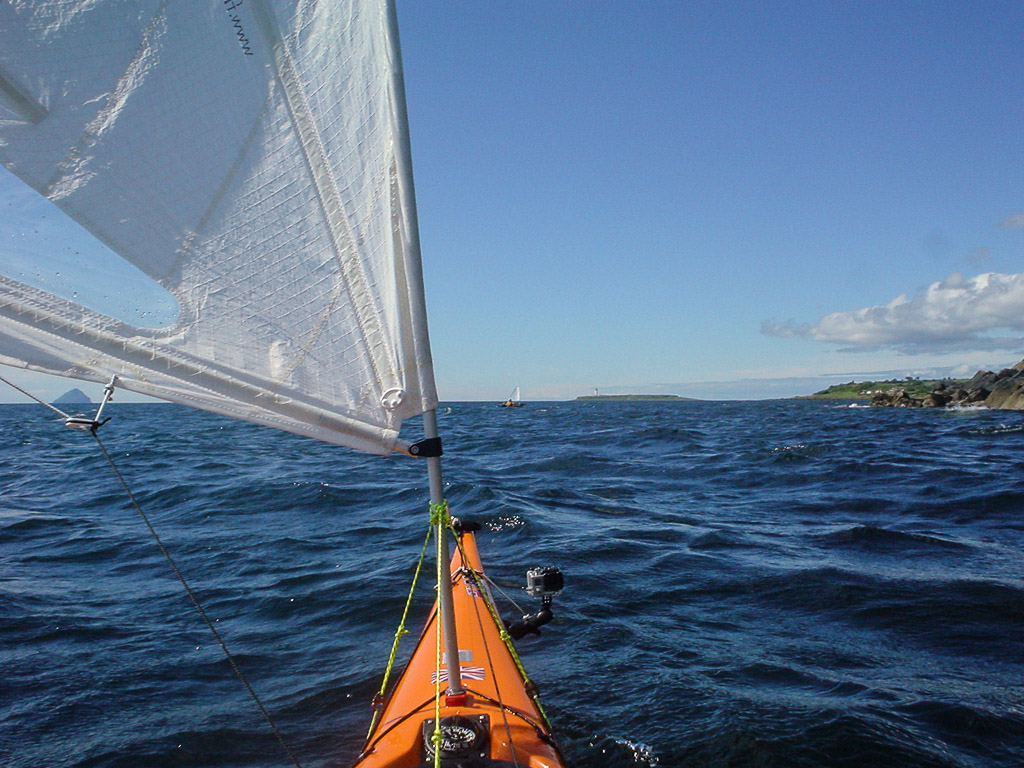 Between Largybeg Point and Dippen Head the wind got up to the extent that even without paddling, the kayaks with sails drew too far ahead. Mike and I dropped sails but we still enjoyed a fair bit of assistance on the way to our next destination, the isle of Pladda. 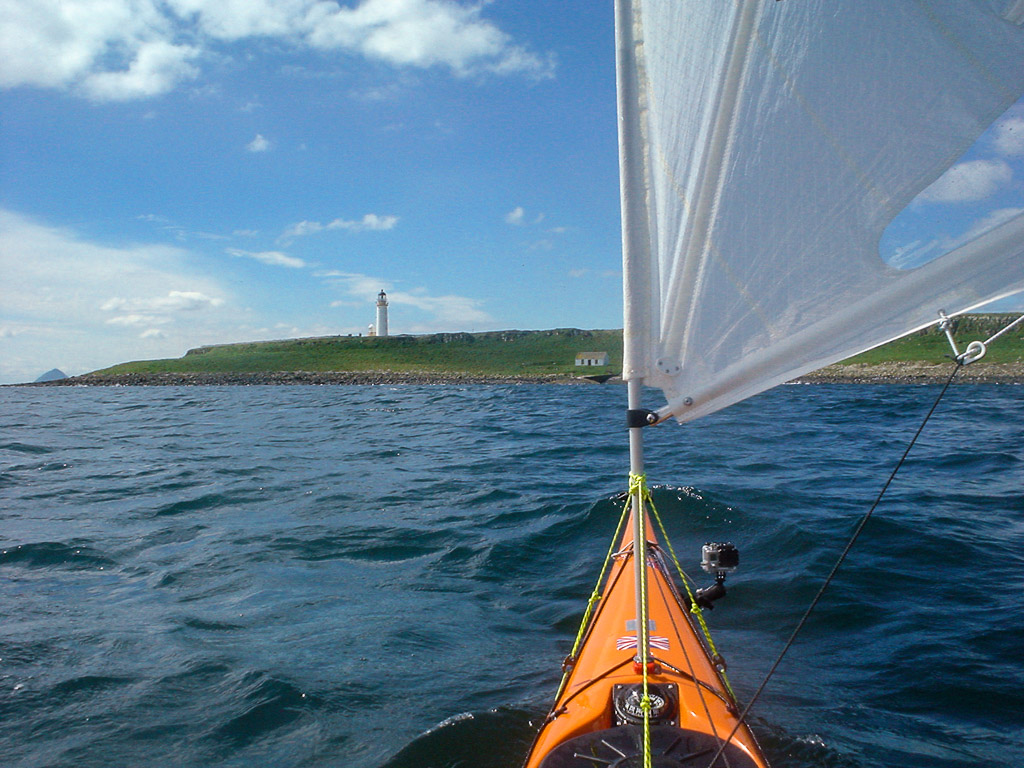 As we crossed the Sound of Pladda and approached Pladda with its prominent lighthouse, I could resist no more and whipped the sail up. I drew ahead of Mike and Ian again. 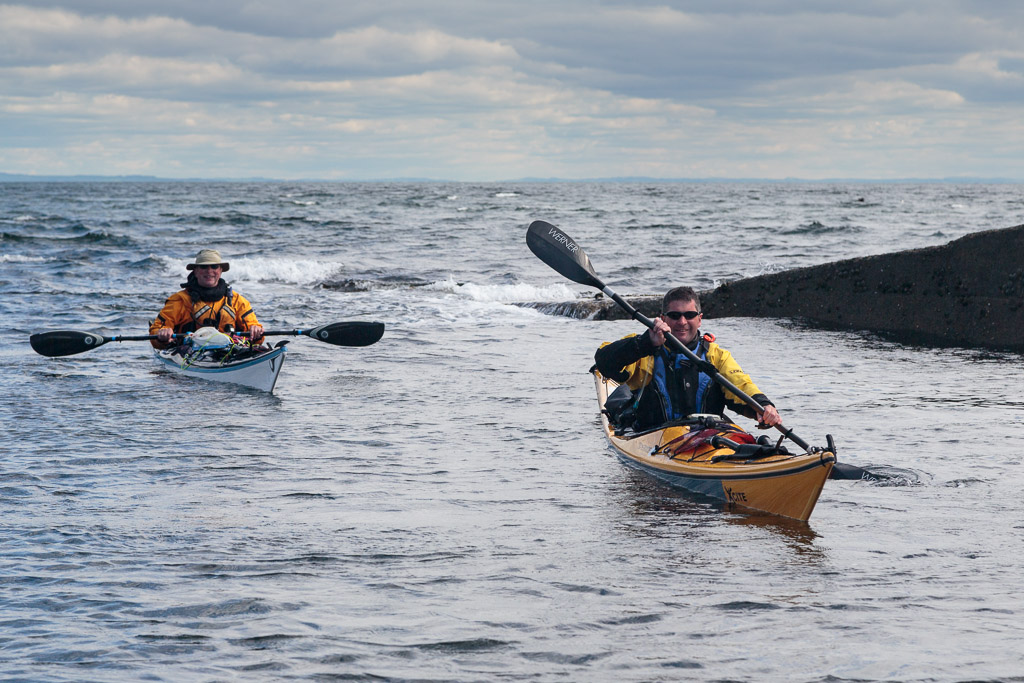 By the time we got to Pladda we were filled with the exhilaration of the perfect weather conditions. We were really glad we had decided to circumnavigate Arran anticlockwise and so get the wind as a tailwind. 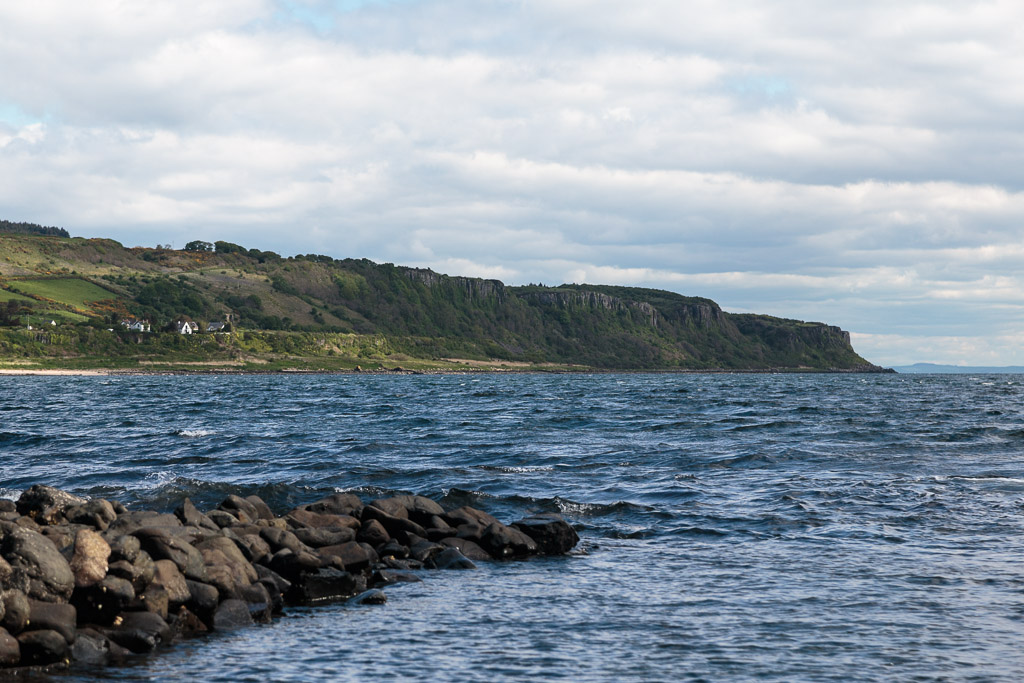 With a NE wind blowing straight from Dippen head to Pladda, I had wondered if it might be tricky landing in the little lighthouse harbour, which is on the north of Pladda. We needn't have concerned ourselves. The harbour had been cleverly constructed and... 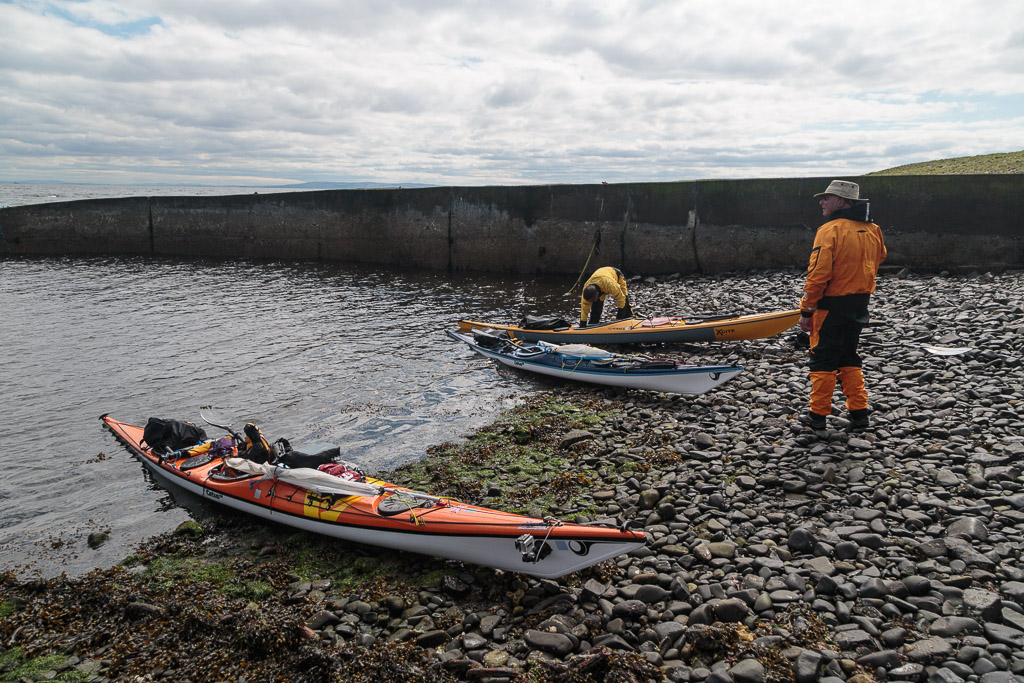 ...once through the narrow entrance we were in perfect shelter. It was now time for an explore but there was also a decision to make. If the wind was forecast to ease the following day, we would push on round the south coast of Arran and camp in the SW corner ready for a crossing to Davaar Island off the Kintyre coast the next day. However, the forecast for the next day proved to be for NE F4-5 increasing F5-6 so any thought of crossing the Kilbrannan Sound was forgotten. This gave us some time in hand, so we decided to explore Pladda on foot then go out into the tide race on its southerly side before landing at Kildonan Hotel for a pub lunch. We then planned to stay in the commercial camp site next to the hotel and so would have time for a walk in the afternoon before retiring to the hotel again for dinner. The complexities of route planning in a changeable forecast can be challenging but we felt we had a plan...
Posted by Douglas Wilcox at 9:25 am No comments: