A day at the races, continued... 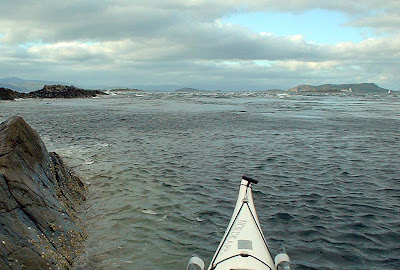 After we slipped through the gap to the north end of Lunga we turned north past the islets of Fiola Meadhonhach and Rubha Fiola. The spring ebb tide was running strongly south but we found ourselves in a counter eddy which propelled us northwards to Sgeir nan Gabhar. This is the sight that awaited us.... a harmless little tide rip. The little loop on the map at the top end of Sgeir nan Gabhar must look so insignificant to you, the dear reader. However, to Tony and I it represents a mountain we could not climb, a torrent of defeat, the ebb of our dignity and a flood of retreat.

We left the shelter of the eddy and immediately were in the full force of the rip. Another big eddy was coming up the west side of Rhubha Fiola and curling round to join the main stream that was running to the SE. It prevented us finding an inside route and a wall of water pushed us further out. I was paddling as hard as I could, my paddles were flashing in the sunlight, my lungs were bursting, I seemed to be making progress. Tony came alongside and as I glanced towards him I saw we had made no forward progress at all! Teeth gritted, I started panting as I tried to increase my stoke rate. "I'm not going to last much longer!" The sparkling waves were speeding past faster than I had ever paddled before and my chest was bursting. A fulmar swept effortlessly into view, its teasing wing tip clipping the wave that was just about to pile into me and sap my last reserve. I could resist the streaming tide no longer. "Tony I've had it!"

I broke off and relief and spray swept over me as I bounced downstream at high speed through the wave chain. It seemed like an eternity of effort but the GPS later revealed that our premature ejection from the race had occured after a mere two minutes. 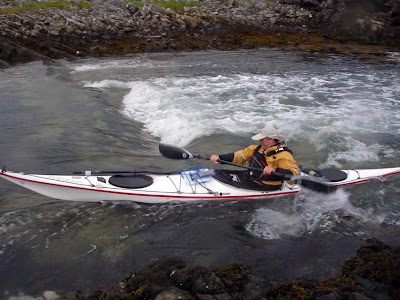 We now had a problem. We had set up camp on Lunga's west coast and now the powerful tides of the Firth of Lorn had cut us off. Our only chance was to try and return through the gap we had been playing in. Unfortunately the tide had dropped and a steep wall of rushing water lay ahead. Tony managed to get through at his second attempt. I made three unsuccessful attempts but was by now completely exhausted. We tried to set up my tow rope for Tony to pull me through but there was nowhere for him to stand far enough upstream and he lost leverage just as I approached the fastest section of the chute. Beaten back by the force of nature, I retired to lick my wounds and look for my split paddle that had come off in the struggle with the tow line.

A few minutes later Tony appeared on foot, over the rocks and kindly paddled my boat speedily up the chute. That's what younger, fitter friends are for! 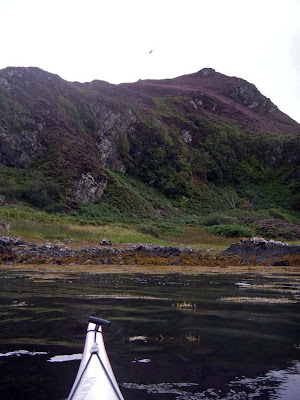 We returned to our camp on Lunga's west coast. The golden eagle was circling overhead. It was great to rest our weary bones round the camp fire and slake our substantial thirst as the sun went down behind the mountains of Mull.

What would the morning hold? Before then, the eagle's hungry chick squawked all night.