Calculating slack water in the Corryvreckan

I am currently writing a sea kayaking guidebook book for Pesda Press "Argyll and the South West, Ardnamuchan to the Solway Firth by Sea Kayak. (ISBN 978-1-906095). This is one of the most complex areas of the UK coastline and I am determined that it will be a piece of work which is thoroughly researched, both in terms of previously published information and also of first hand experience.

I think I am pushing the good will of Franco, the publisher, but I do not want to rush a guide based on my experience of a piece of coastline on one trip, one way, in one set of weather conditions. The Corryvreckan is an example of a serious bit of coast, a key point in the planning of any voyage in these parts. If you click the Corryvreckan tag link on the right, you will discover that we have passed through this Gulf E/W both ways, along both coasts, crossed it N/S both ways, at a variety of states of tide and in a variety of wind and swell conditions. We have camped on both its north and south shores and climbed into the hills of Scarba and Jura to photograph the various eddies and over falls.

For those of you who are interested in such a sea kayaking guide, I appreciate your patience, thank you.

We entered the west end of the Corryvreckan at 1446 and landed at Camas nam Bairneach at 1500. We enjoyed a view of the flood in action and a short luncheon but were keen to be on the water, in mid channel, to observe the exact moment of slack water. We launched again at 1525. 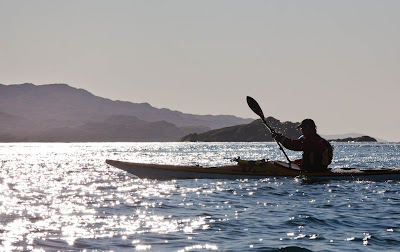 Phil powering into the last of the flood at 1530. The current was still flowing west at 2.5kn. 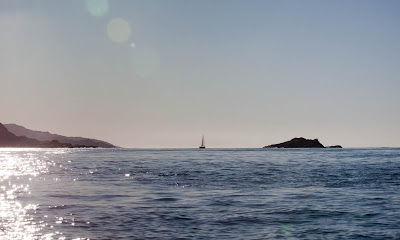 At 1539 several yachts entered the Corryvreckan. At 1544, in mid channel, the current was still flowing west at 2kn (see map below). 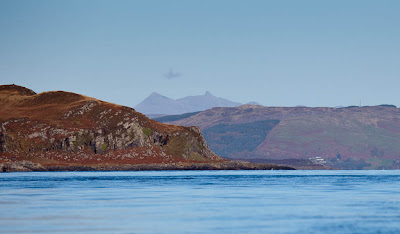 Then at 1549, with the soaring ridges of Ben Cruachan in the distance,... 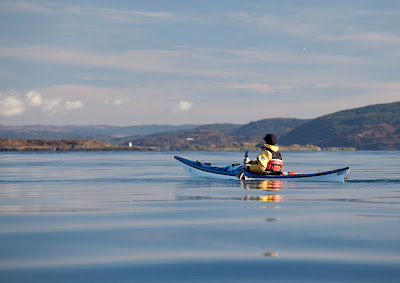 ...the water turned oily calm and slack water had arrived. It lasted a whole 5 minutes until the ebb started with a bang and boils and eddy lines disturbed the surface again. In the distance, you can just see the small lighthouse on Reisa an t-Sruith in front of Tony's bow. 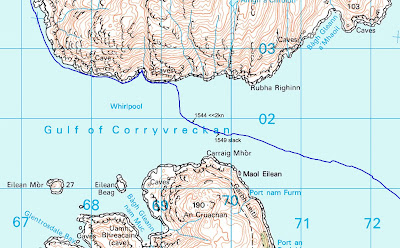 So the published start of the flood was calculated at 1553 and we observed slack water between 1549 and 1554. Pretty good Eh?

Well, err, actually no. There was no wind and we were in a high pressure system with preceding light winds and little swell. There are very many factors that can alter the change of tide in these parts and you need to go prepared to observe what you find on the day (and of course to have checked your calculations).

Thank you for your patience while I get the book right... :o)
Posted by Douglas Wilcox at 10:20 pm 7 comments: