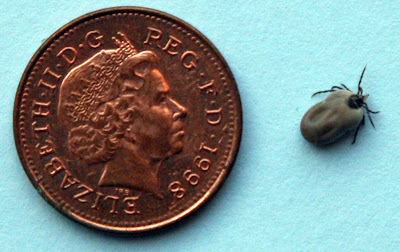 This charming looking insect is Ixodes ricinus or the hard bodied tick. (The penny is 15mm in diameter.)

It preys on mammals by sucking their blood and storing it in its abdomen. It particularly likes rabbits, sheep, deer and sea kayakers. This year seems a bad season for them and it is worth examining yourself after walking through vegetation like bracken. They climb it in wait and anticipation of feasting upon their next victim.

Traditionally people have pulled then out with their nails or tweezers, burned them off with a cigarette or attempted to suffocate or stun them using Vaseline or alcohol. Unfortunately all these methods cause the little creature to dig further in and to puke its stomach contents into the victim's blood stream. This partially digested blood is a heady cocktail that contains another of God's creations, a spirochete bacterium called Borrelia burgdorferi sensu lato. This causes a condition called Lyme disease in humans. Believe me (and I am a doctor), Lyme disease is something you would much prefer not to have.

Public service announcement: if you get a red ring spreading out from a tick bite you should seek medical advice, mention you have been bitten by a tick and you are concerned about Lyme disease.

A much safer way to remove the injurious, illegitimate and far from insignificant insects is to use a little rotating hook such as the O'Tom, available from all good veterinary surgeries. You slide the tapered fork behind its bloated abdomen then slowly twist without pulling. The tick can resist a pull by digging in with its jaws and fore feet but it's helpless against gentle rotation. Some favour anticlockwise and others clockwise rotation. My own experience is that both are equally effective.

Are you curious what to do with the now pitifully struggling insect which you have untimely ripped from its natural element? Well, this might not be good for your Karma, but the following is my humble suggestion. I take some delight in burning the hapless former parasite.

If only it was so easy to get revenge on the Scottish midge.
Posted by Douglas Wilcox at 9:49 pm 10 comments: