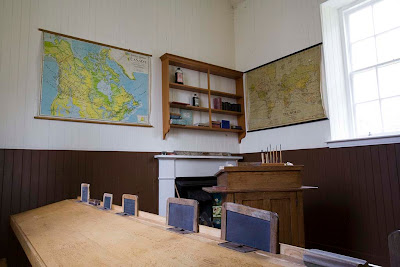 Leaving the St Kilda church by a side door, we entered the school room which was completed in 1900. The long silent room was brightly lit with windows front and back. The children's desk had a neat row of slates (very similar to those I used on starting school in the Highlands in the late 1950's). The teacher's desk overlooked that of the pupils. On the wall hung maps of Canada, the World and South Africa.

Although a school had been established on St Kilda in 1709 it was not until 1809 that a teacher was appointed by the Society for the Support of Gaelic Schools. He remained on the island until a resident minister was appointed in 1829. Education was then the responsibility of successive ministers until 1884 when the Ladies Committee of the Highland Society started to send missionary teachers out to the island. 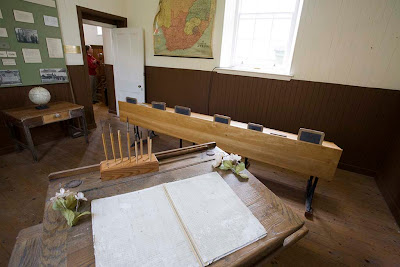 On the teacher's desk a ledger lay open at the school roll. There were names of 50 children who had entered the school from 1892 until the late 1920's. The pages have been damaged by 116 years of dampness but some lines of copperplate writing in India ink are still legible. The final column lists "reason for leaving". 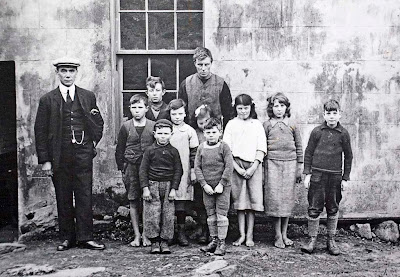 The children had names like Niel (sic) Gillies, Margaret MacQueen, Rachel MacDonald, John Ferguson, Catherine Gillies, Rachel Gillies and Flora Gillies. This photo (from a display in the schoolroom) was taken in 1927. The man was a missionary teacher sent from the mainland.

Although the children learned about far away places such as Australia (and many left the island to go there) they received little instruction on sustenance farming which was vital to their survival. In many ways the charity of the educators failed the islanders. It did nothing to make their lives easier but it opened their eyes to opportunity elsewhere.