A turbulent past but all calm now as we made our way past Garroch Head. 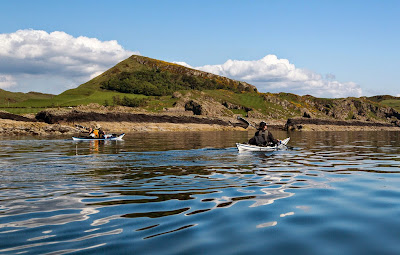 The conical profile of St Blane's Hill is the distinguishing landmark at the south end of the Island of Bute. This part of Bute was one of the earliest Christian settlements in Scotland. St Catan founded a monastery here at the end of the sixth century and was succeeded by his nephew, St Blane. The monastery has a turbulent past. Two abbots were killed and the monastery was sacked by the Vikings at the end of the eighth century but the church ruins we see today was rebuilt in the 12th century 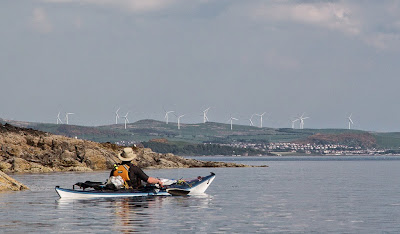 On a calm day the low lying Garroch Head looks very inauspicious and for those who believe the false mantra "There is no tide in the Clyde"   it can hold a nasty sting in its tail. The collection of wind turbines on the distant Ayrshire hill hints that this can be a windy place. The south going ebb tide passes either side of Bute... 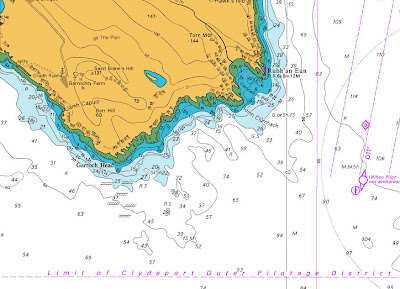 ...and where it meets, it kicks up a significant tide race. The effect is amplified if there is any south in the wind or if the Firth is swollen by rain or melt water. 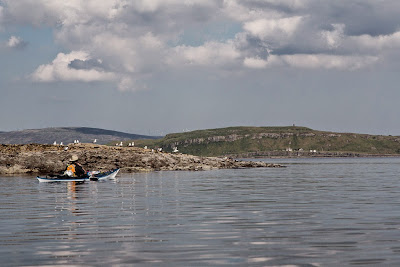 As we rounded Garroch Head we caught our first sight of Little Cumbrae to the east.

From Dunagoil Bay, where we had taken our last break, to our next landfall on the Ayrshire coast is 12 km. We embarked on our crossing of the Firth of Clyde and slowly the top of Ailsa Craig came in to view. It was 52km away, beyond the east end of Holy Island. 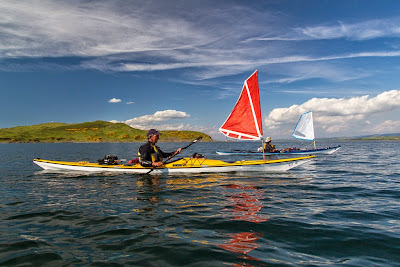 As we left Garroch Head far behind us, a lovely light developed as the sinking sun illuminated its green slopes flecked with yellow gorse.
Posted by Douglas Wilcox at 10:35 am No comments: