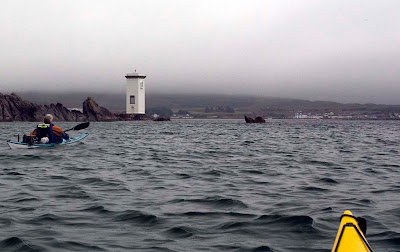 As we were searching for a place to camp on the west shore of Kilnaughton Bay on Islay we came across the square tower of the Carraig Fhada lighthouse. It was built by David Hamilton and Son in 1832. It was taken over by the Northern Lighthouse Board in 1924. From the SE, the correct approach shows a white sector which is flanked by red and green sectors. The light flashes every 3 seconds.

In the distance we spotted the White Hart Hotel a prominent 3 storey building at the left hand end of Charlotte street in Port Ellen which fronts onto the shore of Kildalton Bay. After making camp and eating, David, Tony and I decided to walk the 5km into the Port Ellen. Our path took us over rocks, dunes, heath then a track before crossing a beach, fording a river then climbing a steep stone staircase and through a spooky wood before emerging onto a road that eventually led to the hotel. Quite a tricky route in the daylight when sober.

We entered the White Hart Hotel's public bar to find it to be like a licensed version of the Marie Celeste. All the lights and the television were on and the bar appeared to be fully equipped and ready for serving but there were no staff or customers apart from ourselves. After several "halloos" had failed to even raise a shadow of a barman and after pangs of thirst were gripping our throats we realized it was a Sunday evening. But Islay is not like the northern Outer Hebrides which are in the grip of a stern Calvinism that frowns on the opening of bars on the Sabbath. Surely it must be possible to get a drink. I espied a ship's bell at the side of the bar, I gave the clapper a firm tug. DING.... was followed by silence. Another DING and we were still thirsty. DING ALING ALING ADING. The young barmaid seemed genuinely surprised to see us but efficiently poured a round of Guinness.

Each time our glasses required replenishing we rang the bell. Eventually some locals arrived. One 18 year old recounted a sad tale of how his overindulgence in drink had cost him his effing job, his effing house and his effing woman. We ordered another round and laughed at the TV as Jeremy Clarkson on Top Gear told a funny story about a sat nav system afflicted by Tourette syndrome.

After enjoying some excellent Guinness we decided to finish the evening off with a nightcap or two of the local nectar: Ardbeg malt whisky. We were absolutely amazed to discover that not only was this particular libation unavailable but there were no other Scottish malts available either. The only "similar" liquor on sale was Jack Daniels and this in a Scottish bar on an island with nine distilleries and one which is less than 6km from the hallowed premises in which the Ardbeg is distilled!

The Tennessee distillation may go down well on the other side of the pond but it has only the most tenuous of Celtic connections (and Welsh at that) to the true Uisge Beatha. If this is what our young friend had been drinking, then we were not prepared to also loose everything by accepting it as a substitute. We remonstrated with the barmaid and she then told us we might get some Ardbeg through in the lounge bar. We asked directions and were told we would need to go out into the street along a bit then in the hotel's main door, some confusing directions within the building then followed but were not remembered. Our concern was that it was very close to closing time and would we be readmitted?

Fortunately the empty lounge bar was well staffed by two barmen and we were able to take a night cap or two of the Ardbeg. Afterwards, somewhat sated, we emerged into a moonless night. The only light came from the Port Ellen maltings which roasts the barley required of the whisky making process. We found the heady aroma of burning peat and roasting grains to be quite intoxicating.

Then we were in the dark, with a long way back to the tents through spooky wood and all....