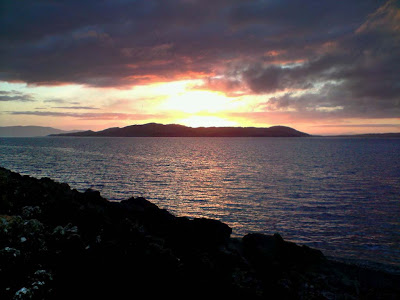 Alan, a recent addition to seakayakphoto.com team, as just sent this photo by MMS into Seakayakphoto Towers. He was disappointed not to be able to join our recent windy sortie to the Little Cumbrae at the weekend so he has headed off on a solo trip today and is camping on the Little Cumbrae tonight. He originally planned to go round Bute in two days but has changed his plans due to increasing swell. He is currently on the beach enjoying a whisky by the camp fire. I hope my text with tomorrow's forecast of force 6 southerly doesn't spoil the enjoyment of the moment.

His photo shows the south end of Bute with Arran and Kintyre in the distance.

Updated 09/04/2009:
Alan is now spending a second storm bound night on Little Cumbrae. Today ferry traffic on the Clyde was severely disrupted by winds of up to 37knots. Hopefully the wind will drop tomorow.
Posted by Douglas Wilcox at 8:24 pm No comments: