Praise the dawn of a new day on Coll 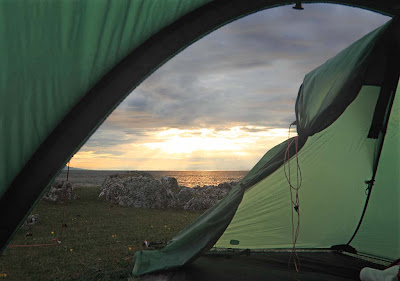 This had been the second sleepless night since I had dislocated my knee. I had run out of the various supplies of ibuprofen, diclofenac, asprin and paracetamol in our first aid kits. The pain was nearly unbearable and it was a relief to stagger to my feet (using Jim's walking pole) to greet the dawn of a new day.

In the distance Ardnamurchan could just be seen on the horizon. In my present state it seemed such a far way off. 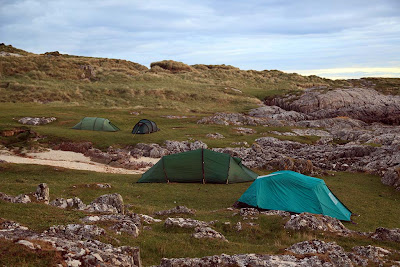 The others were still sound asleep and I was mighty relieved to see that the ringed plovers had managed to move their chick onto the rocks to the side of the beach. The tide goes out a very long way at our destination Portuairk. The sand is very soft so I dreaded walking up to the car. I planned to arrive as close as possible to high tide but this would involve leaving by 08:30 and paddling much of the crossing of 15km at peak tidal flow. 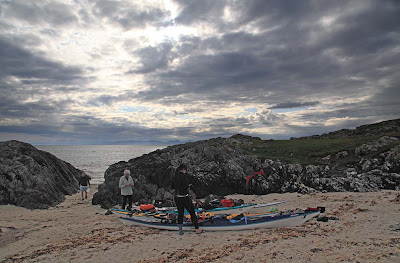 Fortunately the others appreciated the situation and we had had breakfast and loaded the boats by 08:00. Getting into my paddling gear proved a bit of an effort but then I was ready to face the day...