A reluctant visitor to the Priory, Oronsay (not London). 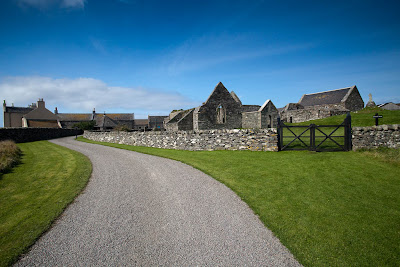 When I first mentioned to David that I wanted to visit the Oronsay Priory, he became quite distressed.

"They'll never let us out, we'll need to go into rehab and walk the twelve steps!"

"Relax David, its not the Clinic, it's just a very well preserved religious complex."

So we found ourselves approaching the beautifully maintained grounds of the Oronsay Priory. 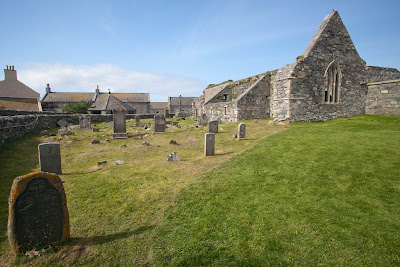 The buildings date from the mid 1300's but there may have been a chapel here since St Columba's time. The Priory was founded by the Lords of the Isles and became a centre for religious sculpture until about 1500. Some say St Oran gave his name to Oronsay but I rather doubt this as Oronsay is quite a common name for tidal islands on the west coast. It comes from the Old Norse and means island of the ebb tide which is exactly what Oronsay is. You can walk to it from neighbouring Colonsay at low tide. 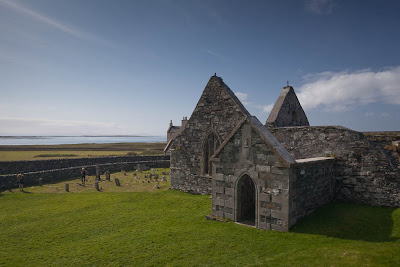 Although there are no traces of its roofs, the walls, including those of the cloisters, are still in remarkably good repair. 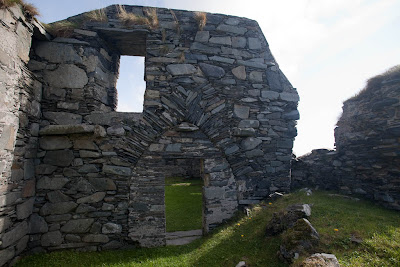 Fortunately for David, our departure from the Priory was unhindered by a locked door. He took a deep breath, followed by a great sigh of relief.
Posted by Douglas Wilcox at 10:16 pm No comments: