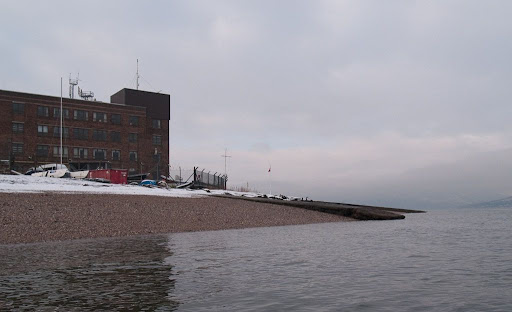 Arriving at Greenock we turned south into the little bay behind Whiteforeland Point. This is the beach that the Royal West of Scotland Amateur Boat Club launch from. They have sailing, rowing and canoe sections. Kayaks (decked canoes) have been paddled and sailed on the Clyde since the mid to late 1800's but traditionally they have been called canoes.

The large brick structure behind is called the Navy Buildings and houses the Clyde Maritime Rescue Co-Ordination Centre or Clyde Coastguard for short. It was built on the site of Fort Matilda, a defensive gun battery, which was completed in 1819. 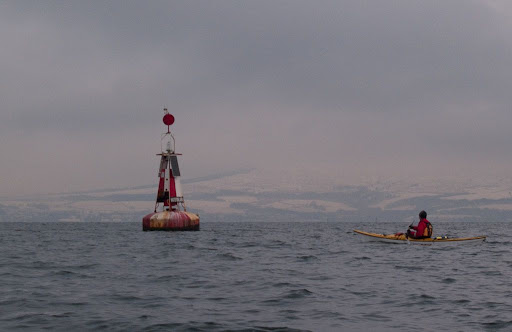 Under the watchful eye of the coastguard we decided to cross the shipping lanes by hopping from buoy to buoy at right angles to the lanes. The first buoy was the Whiteforeland mid channel marker. 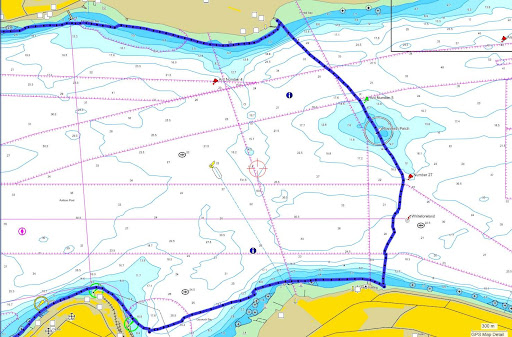 The wreck, just to the SE of the buoy is that of the Iona I, a paddle steamer that had been nick named the "Queen of the Clyde" because of her speed. She was built in Glasgow in 1855 but sank here after colliding with another ship in 1862. She was on her way across the Atlantic to run goods to the Confederate States through the Union Naval blockade* in the American Civil War. 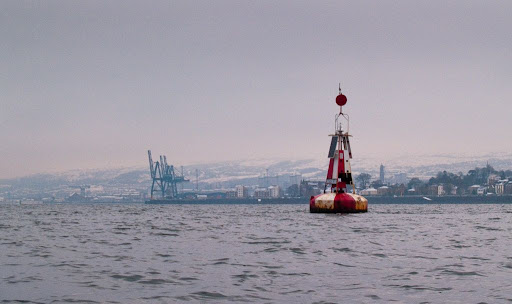 We looked back to the cranes of Greenock's huge Ocean Terminal which is a sheltered deep water port and is the main container port for Scotland and the north of England. It is also visited by an increasing number of cruise liners evern the huge Queen Mary 2. Not so long ago the skyline would have been a forest of cranes working the shipyards and the docks. Now most have gone, though the 250 ton Titan crane at the James Watt dock can just be seen in the background. There are still 4 Titan cranes standing on the Clyde. The others are at John Brown's shipyard, Clydebank, Barclay Curle & Co, Glasgow and the Finneston crane, Stobcross Quay, Glasgow. 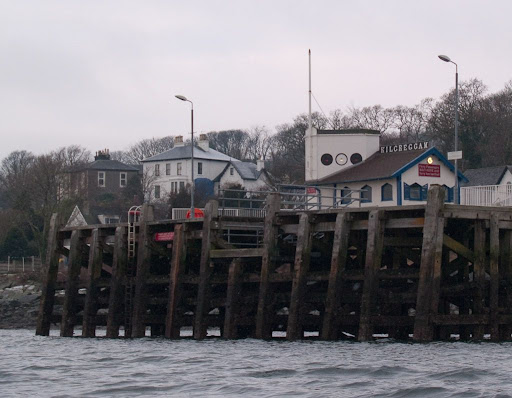 On crossing the Clyde we found ourselves at the Rosneath peninsula which divides Loch Long and the Gare Loch. Kilcreggan is its main town and this is the pier backed by a line of elegant Victorian mansions. A sign at the end of the pier says no cycling... The pier is the last Victorian pier left on the Clyde. The town grew up from the 1820's onwards when the steamers allowed wealthy business people in Greenock and Glasgow to escape the industrial smog and build fine Victorian mansion houses along the coast. Frequent steamers allowed them to commute to the city for work.