Reflections on Loch Shiel. All is not what it seems; shown the water and across the water.

As we proceeded down Loch Shiel in the early evening, the waters of the loch became... 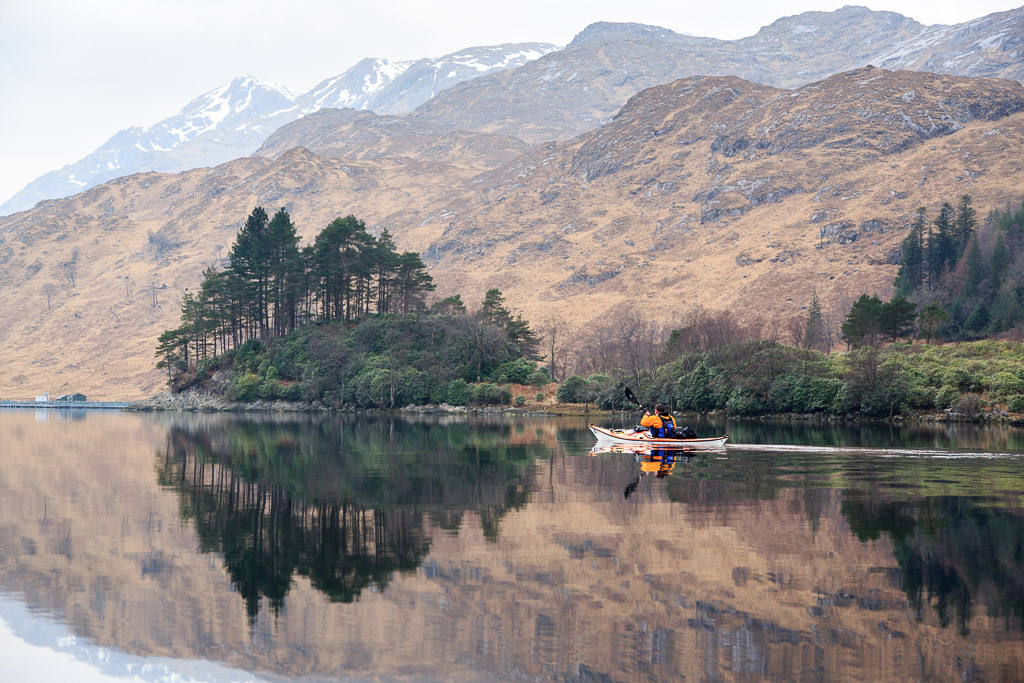 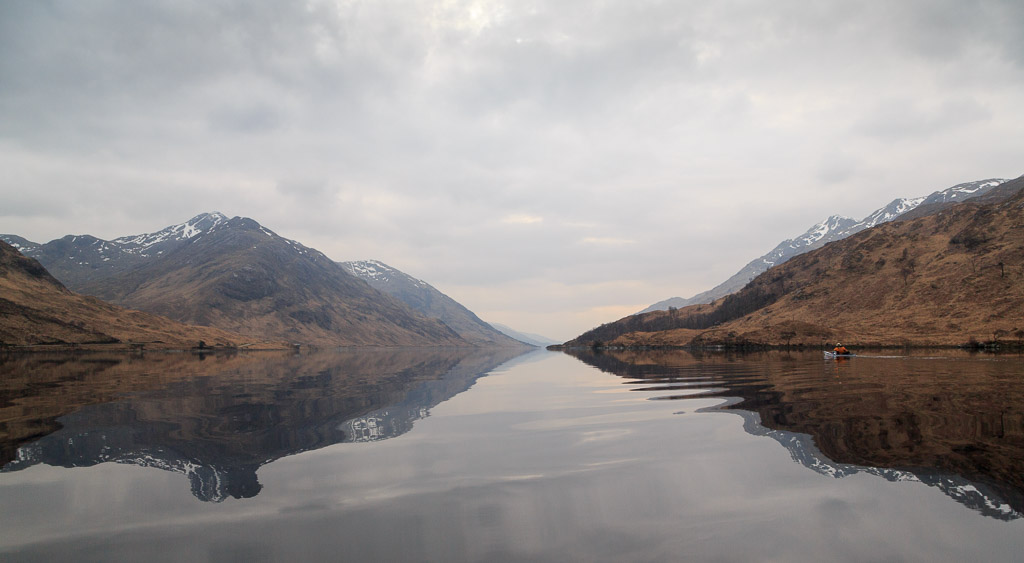 It was down this loch the Prince Charles Edward Stuart the "Young Pretender" to the British throne made his way after the defeat of the Jacobite army at Culloden in 1746. He knew he was safe here. MacDonald of Glenaladale, on the NW shore of the loch was a staunch Jacobite. George II's soldiers hunted Charles down ruthlessly but despite a £30,000 reward, none of the Highlanders who sheltered him betrayed him. In 1746 the Highlands were in turmoil, a long way from the calm of the loch today. The Jacobite cause was complex. It was not just a simple Scottish/English or Highland/Lowland or Catholic/Protestant divide but it led to the destruction of the traditional Scottish Clan system and the clearing of the many small communities that populated the Highland glens. Even the wearing of tartan was banned and it was not until over a century later that Sir Walter Scott and Queen Victoria re-popularised Highland culture and the wearing of tartan became acceptable again.. 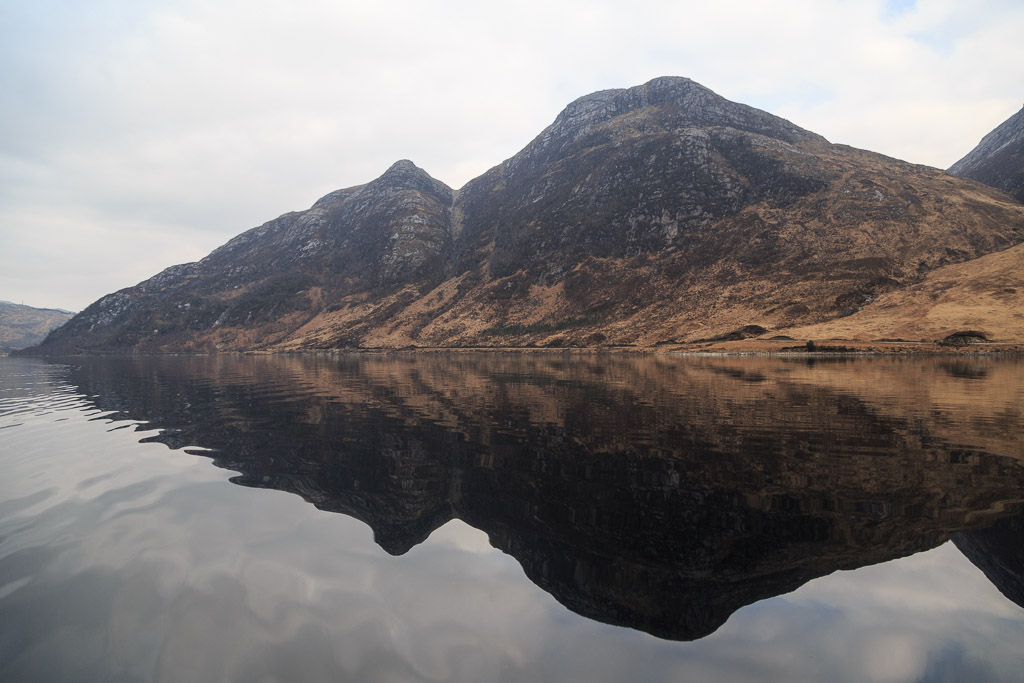 There was no sign of spring in the rugged mountain slopes though... 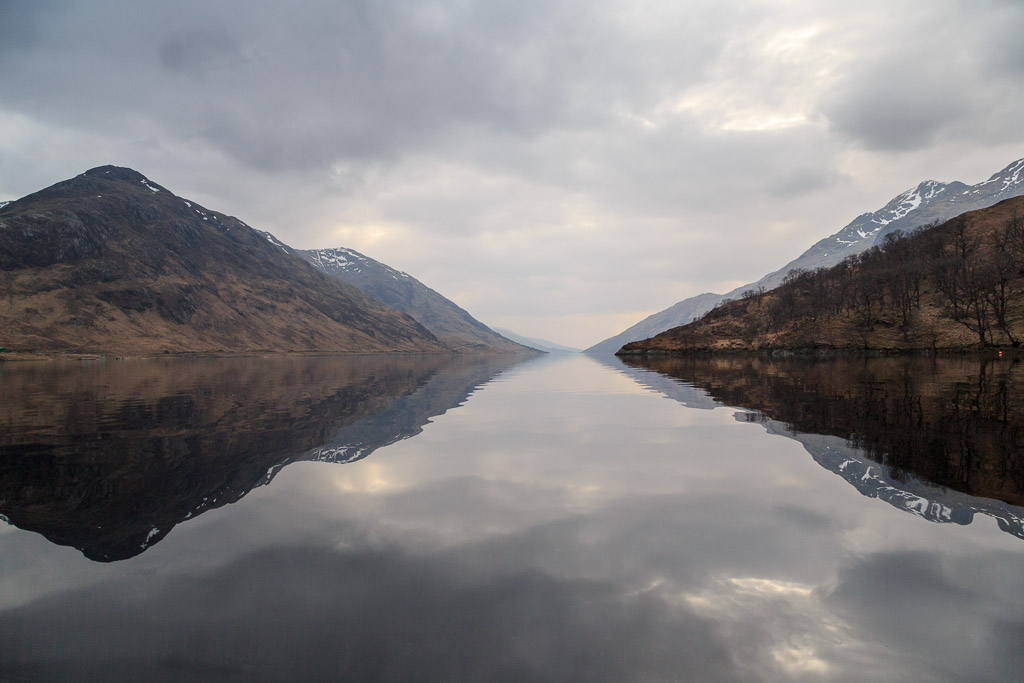 ...the snows had receded to the high corries. 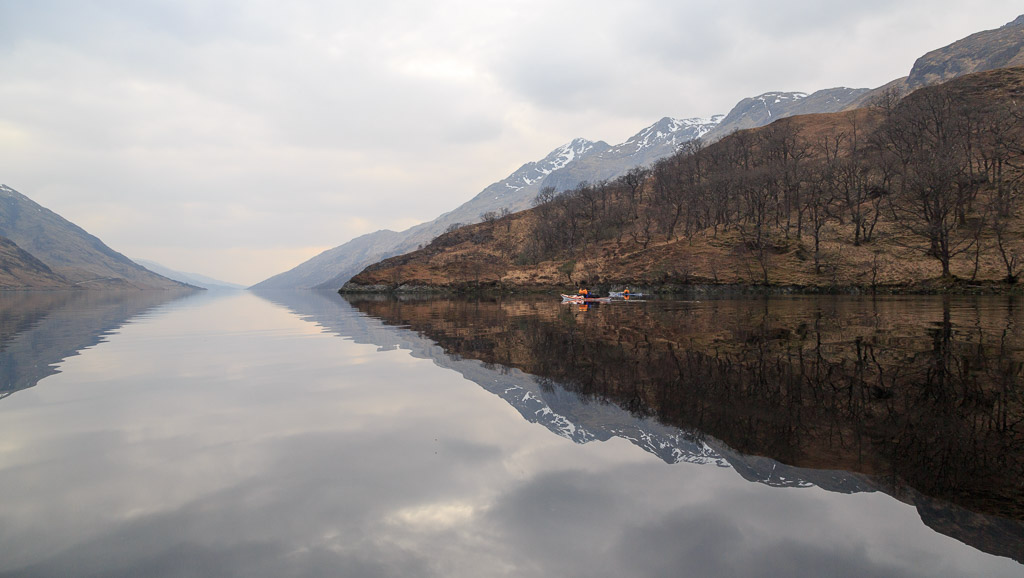 As we paddled steadily down the loch... 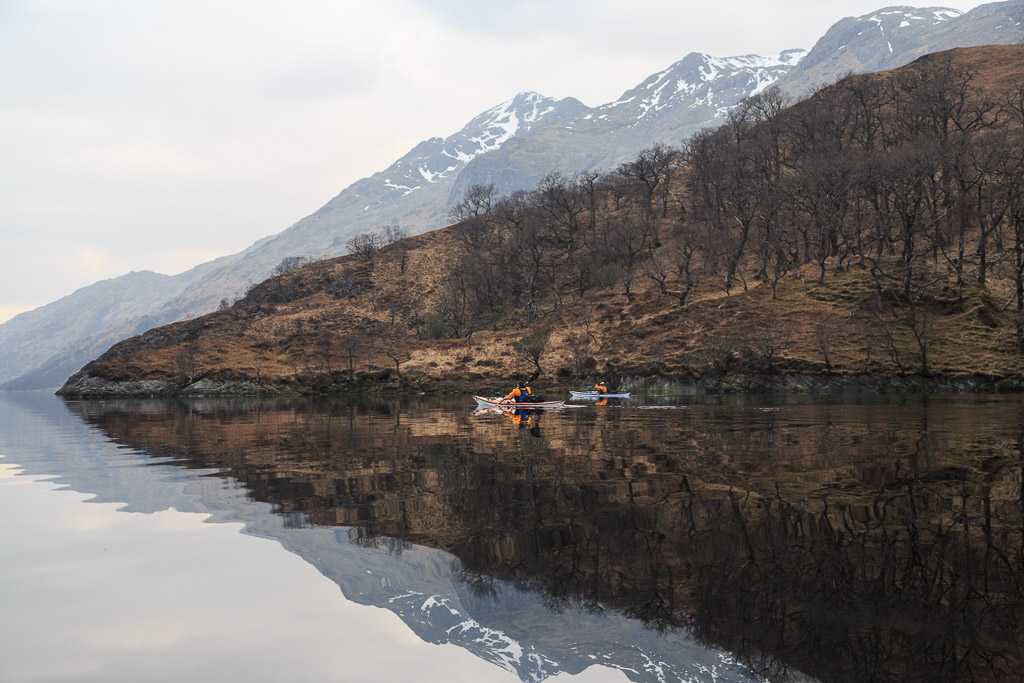 ...we passed many headlands... 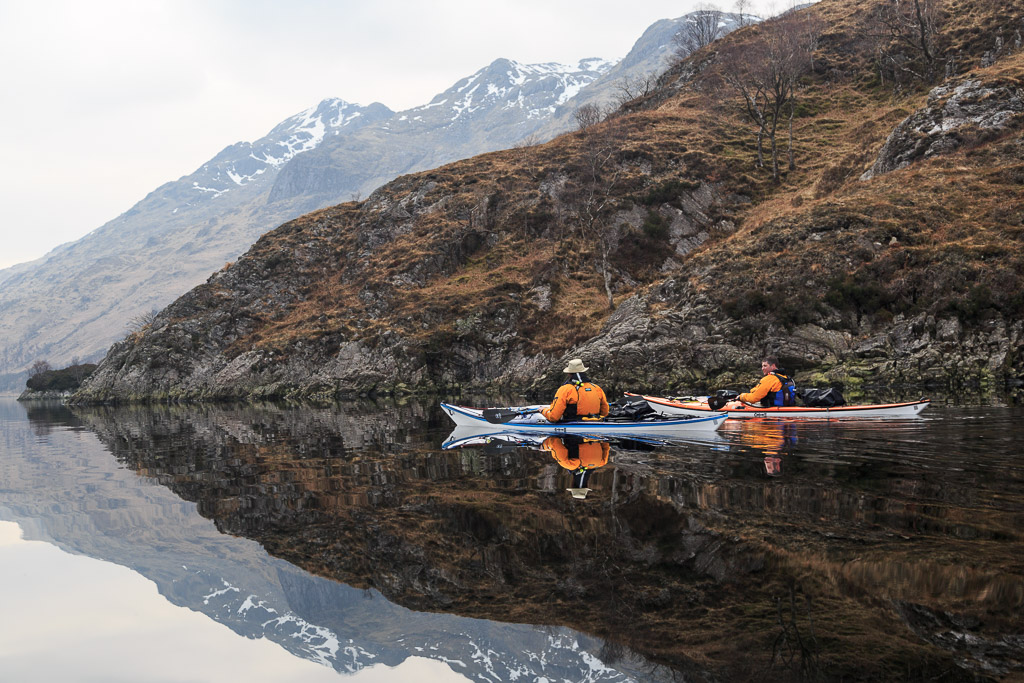 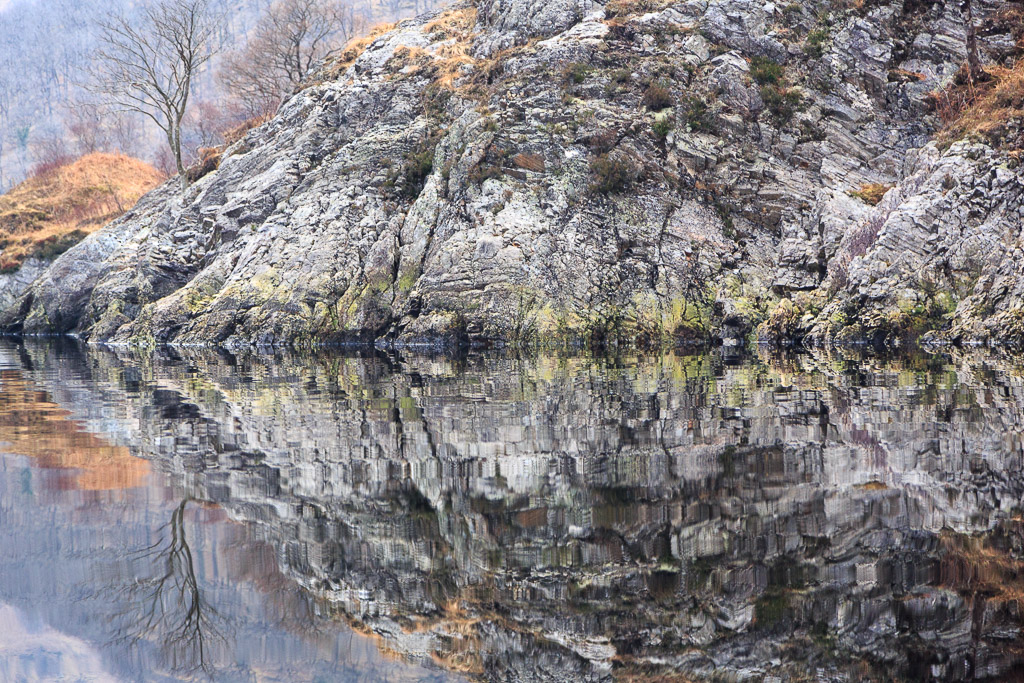 Their rocks had once been polished by ice but... 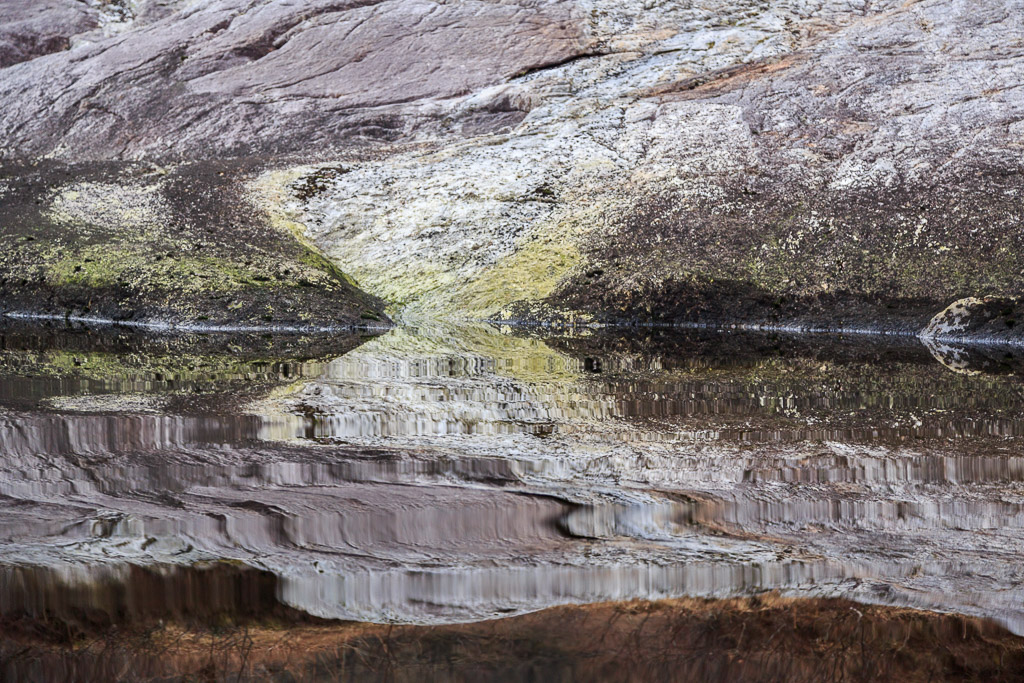 ...were were now reflected by the calm water. 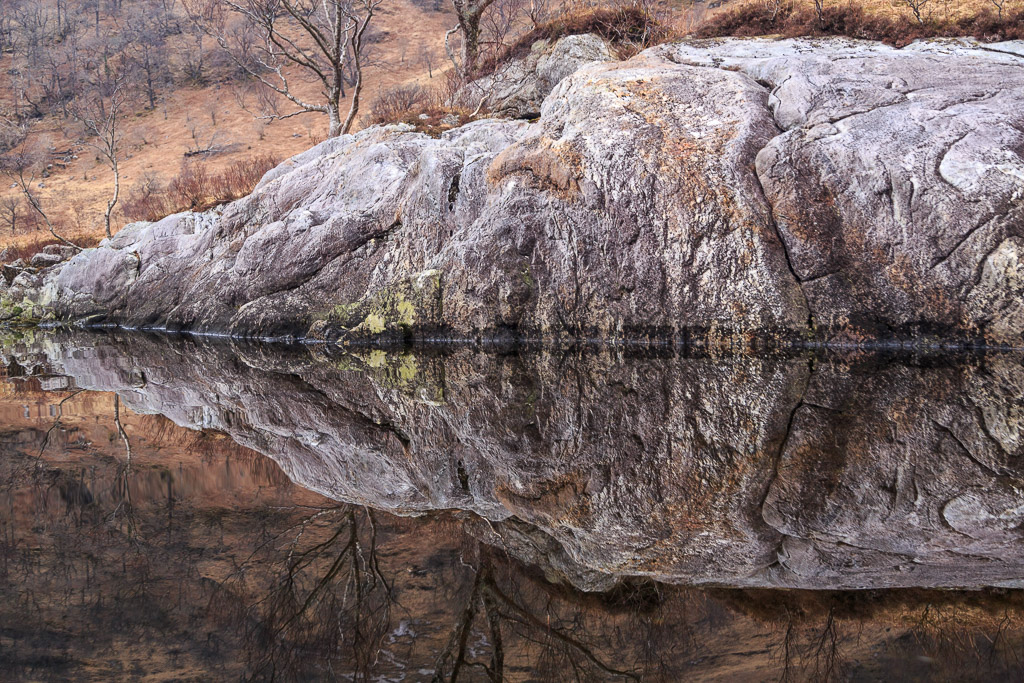 It was quite disorienting paddling close to the shore, sometimes it was not easy to say what was up and what was down! 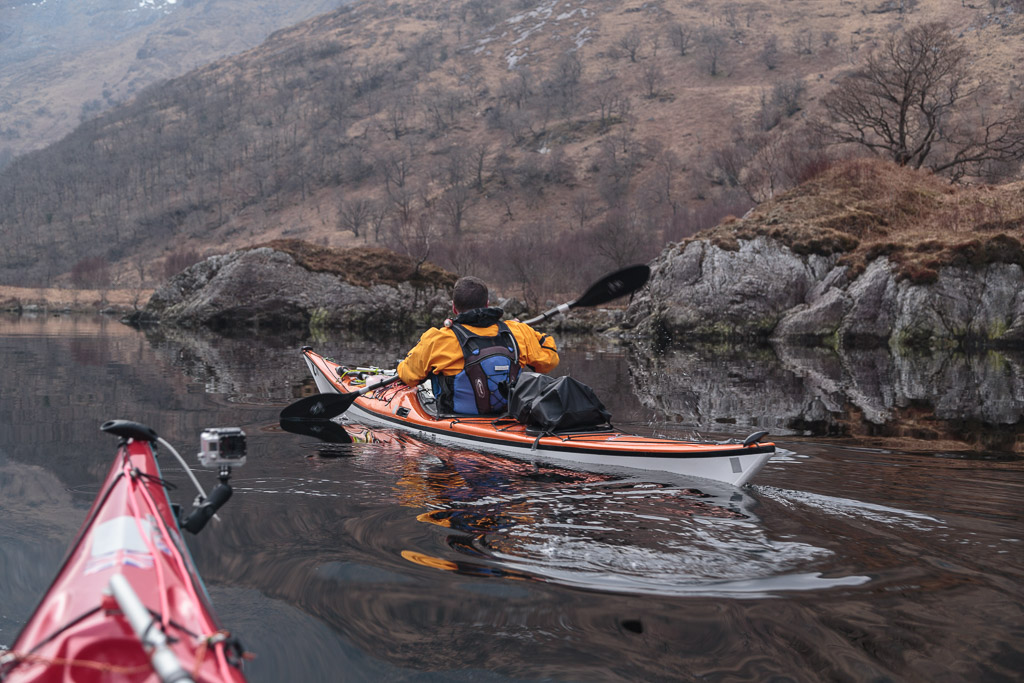 There were surprises round every corner such as... 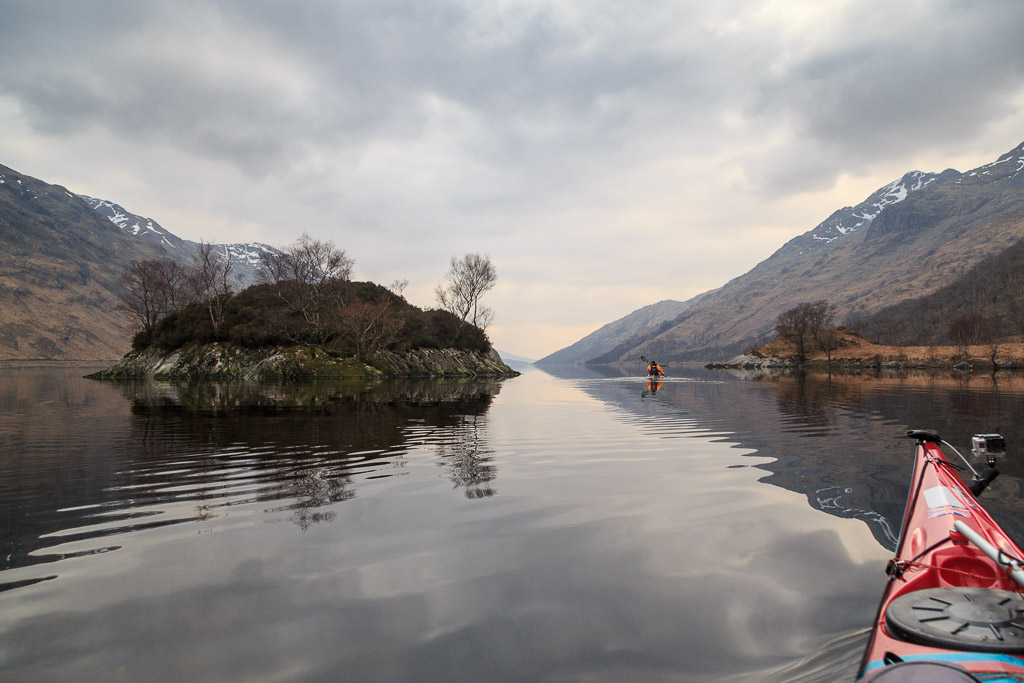 ...Eilean Dubh and if you did not look back, you might miss... 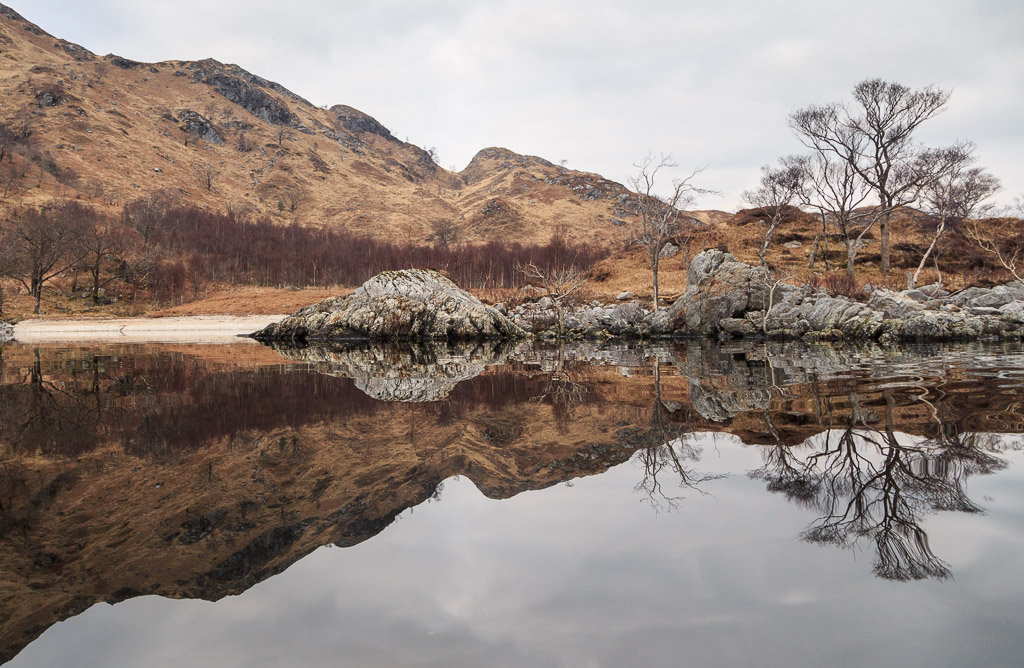 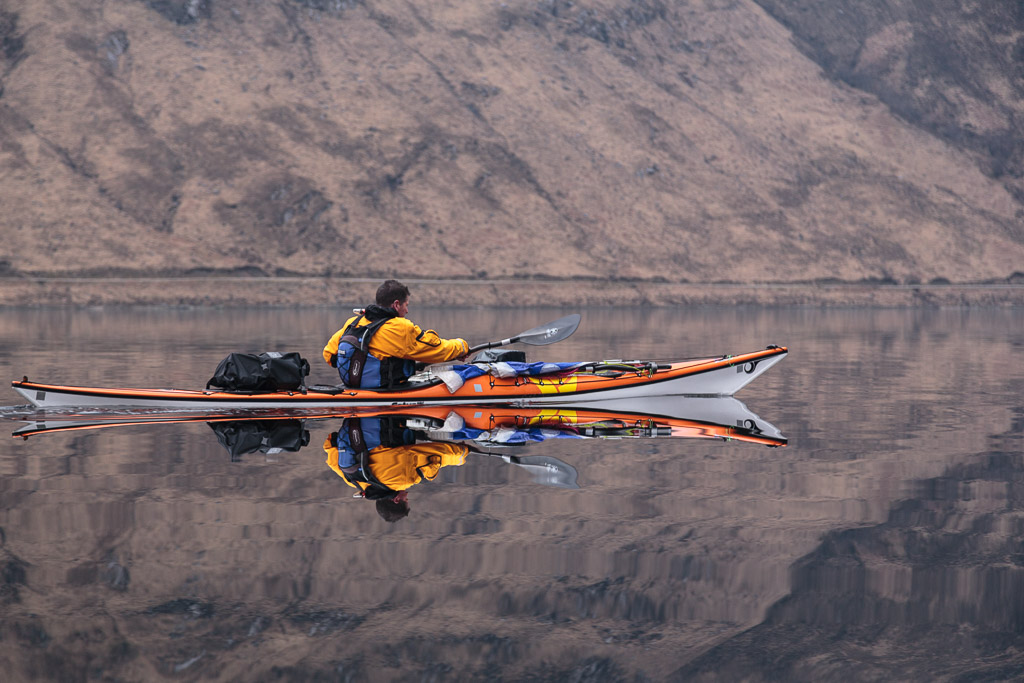 The only sign of man's influence was the forestry track on the SE shore. 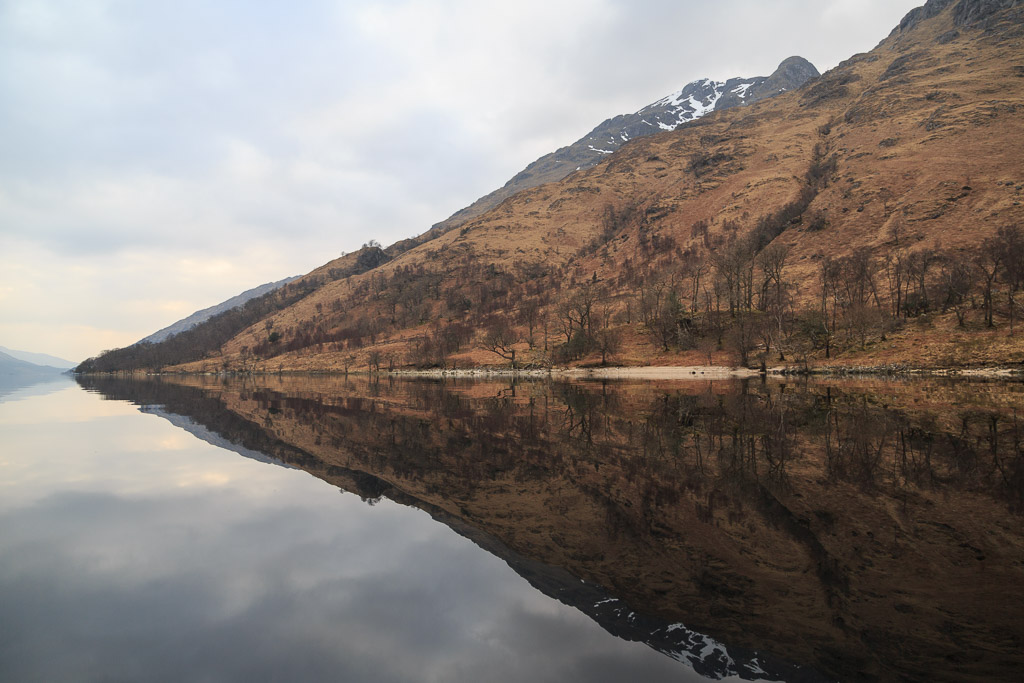 The striking thing about the symmetry in Loch Shiel was that... 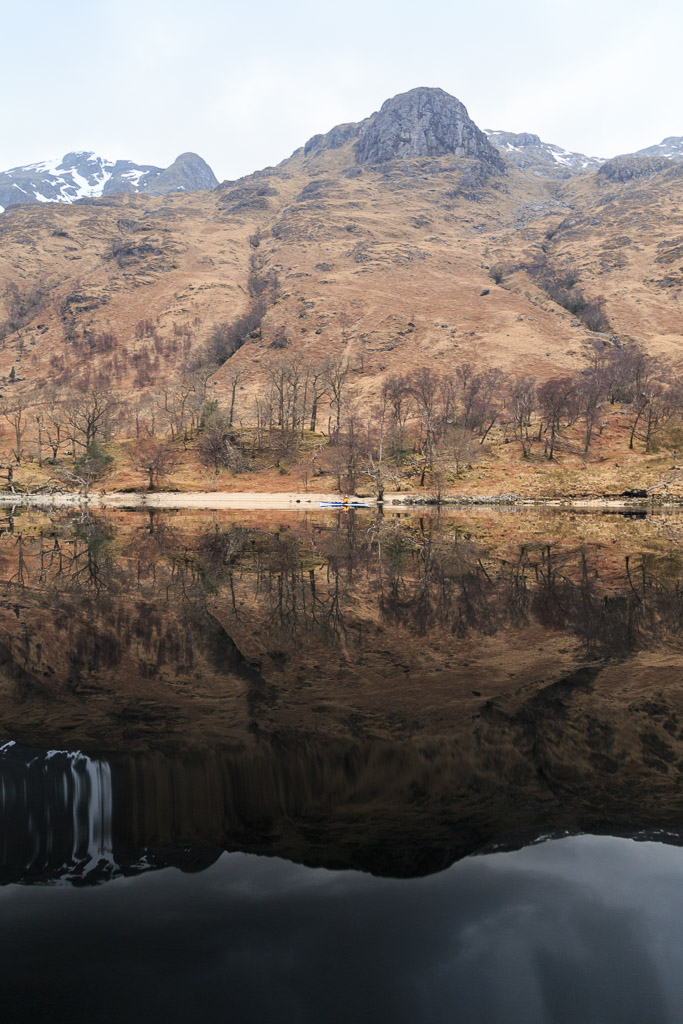 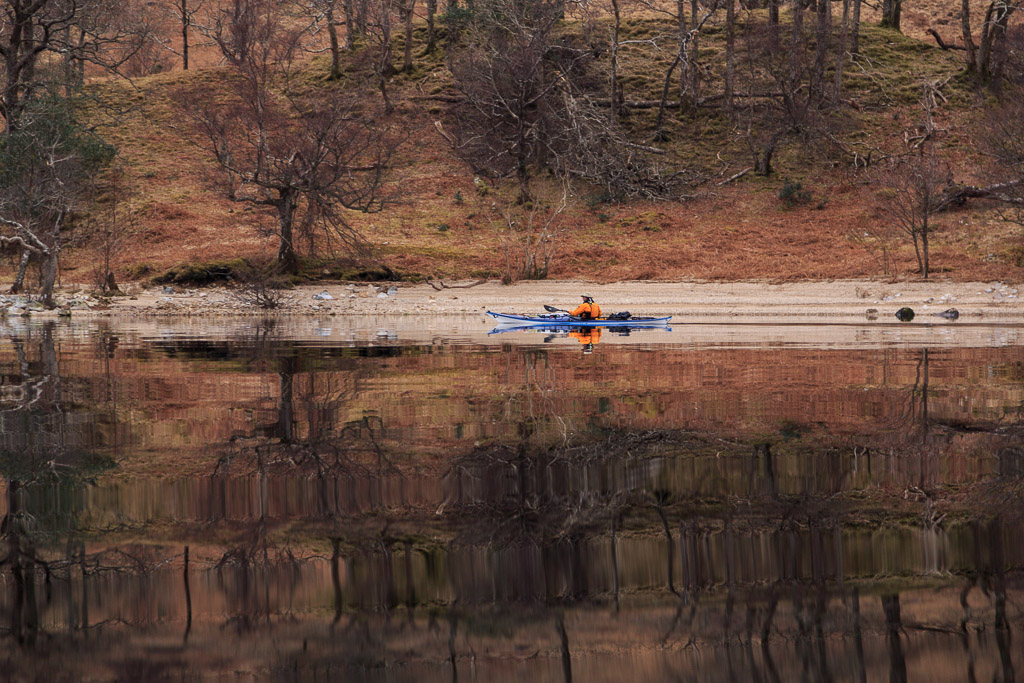 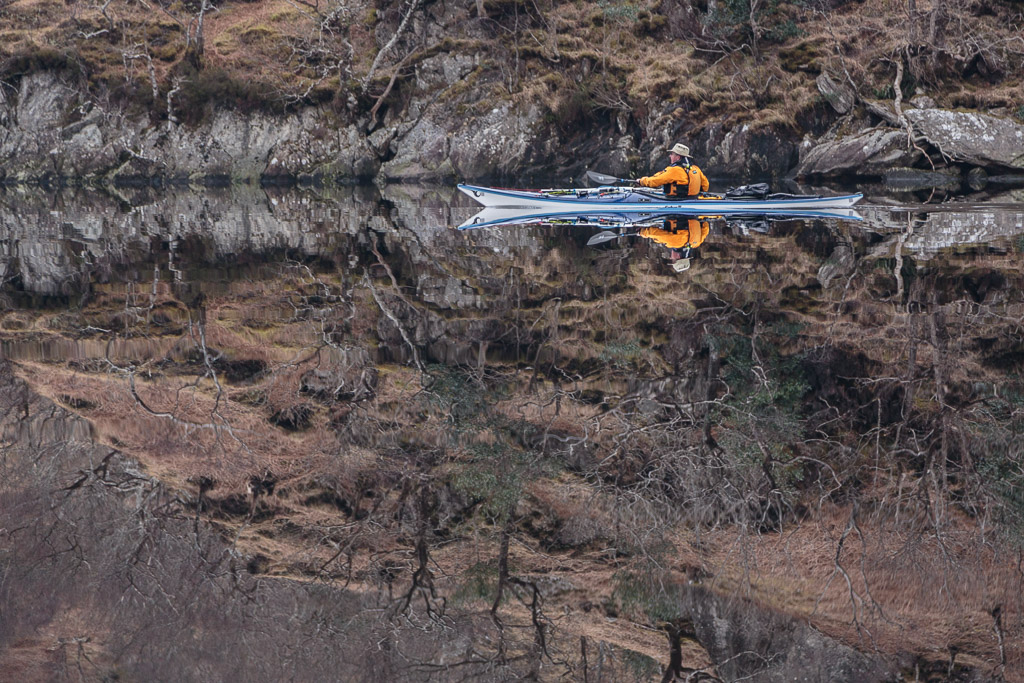 ...more vivid than the reality. 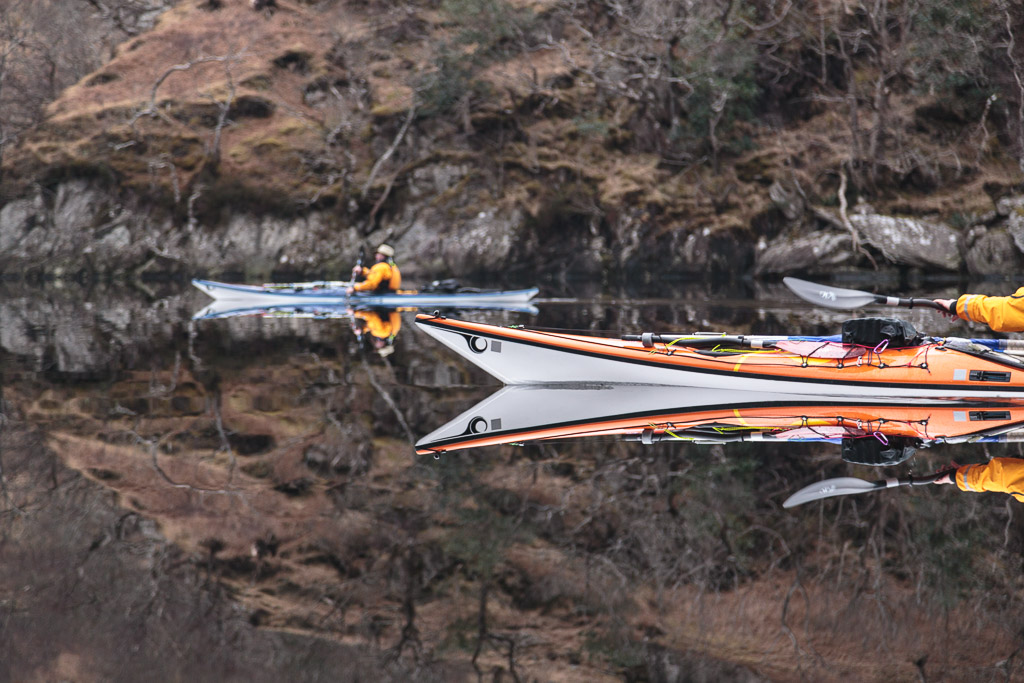 We had been paddling in silence for some time. Each of us was immersed in our own thoughts. 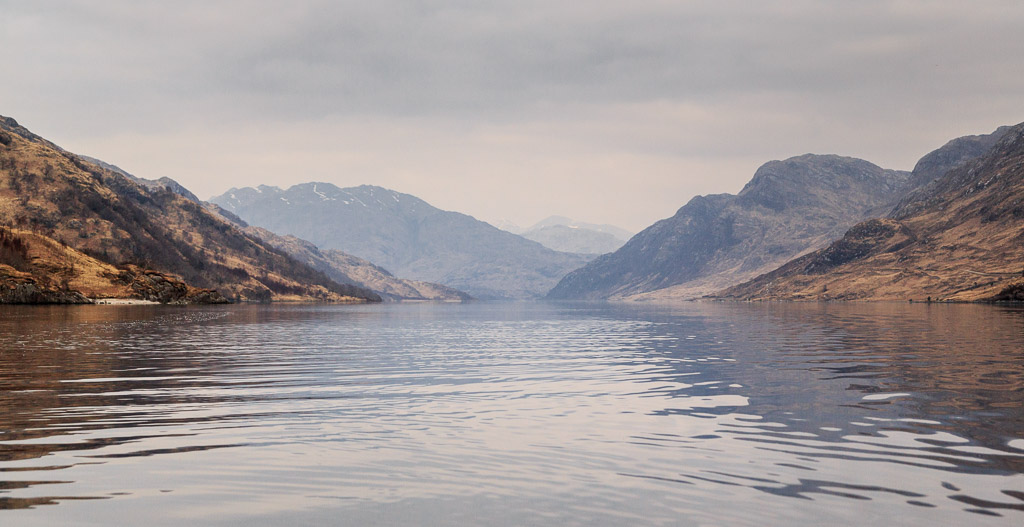 At last I turned back and looking at the now distant head of the loch, realised how far we had come. 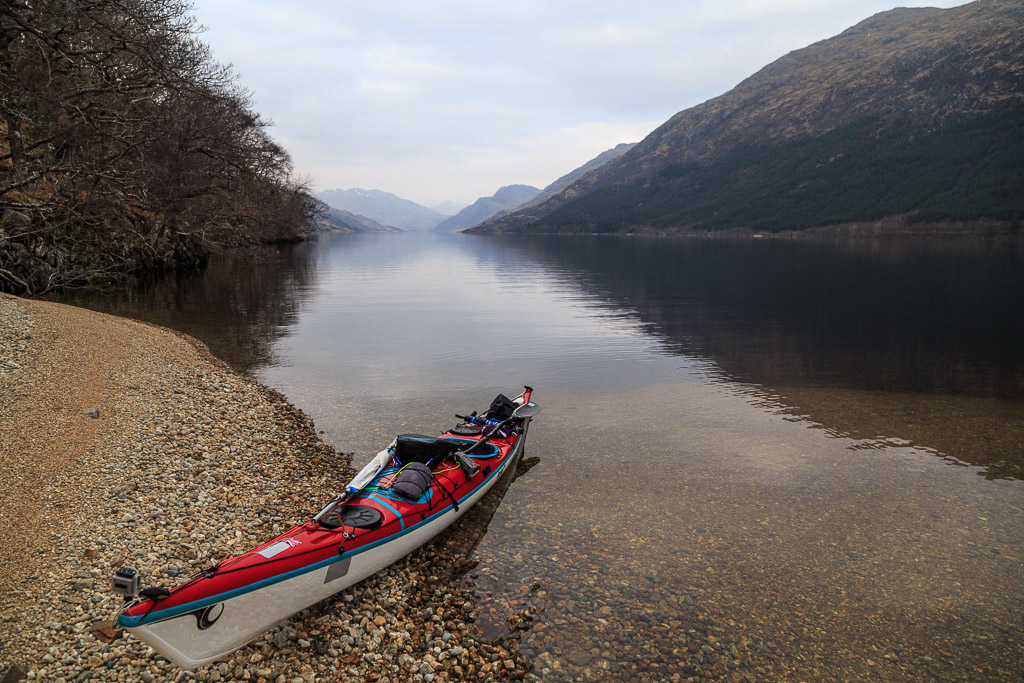 It was definitely time for an early evening tea stop. 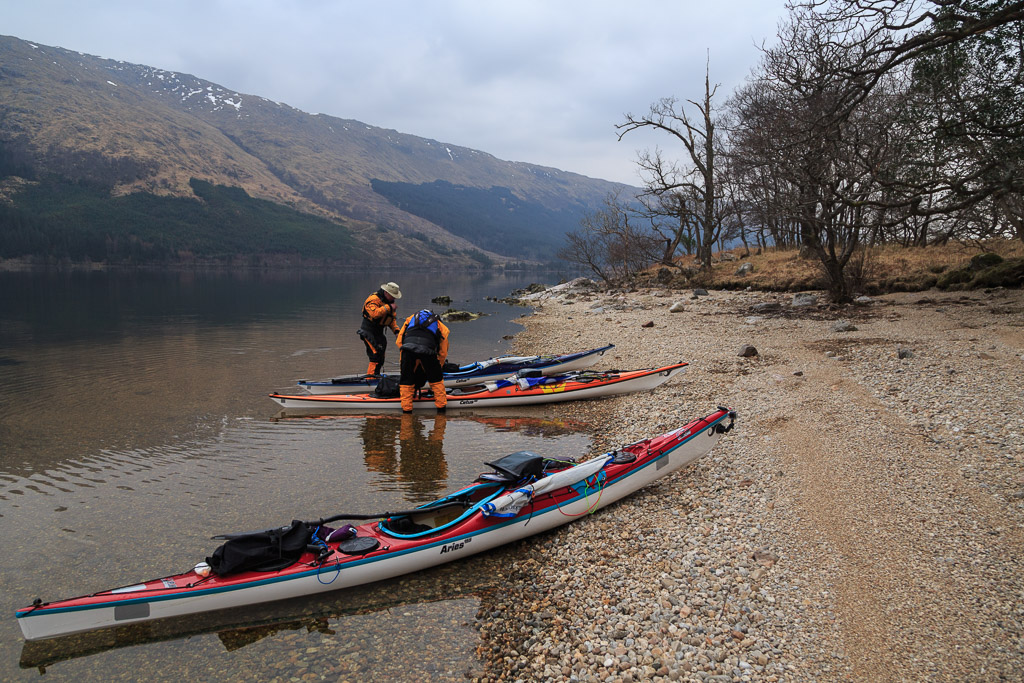 We found a delightful beach just north of Glenaladale to stretch our legs and take a refreshment. We were of course deep in the Highlands of Scotland where "tea" does not necessarily come from a bush. 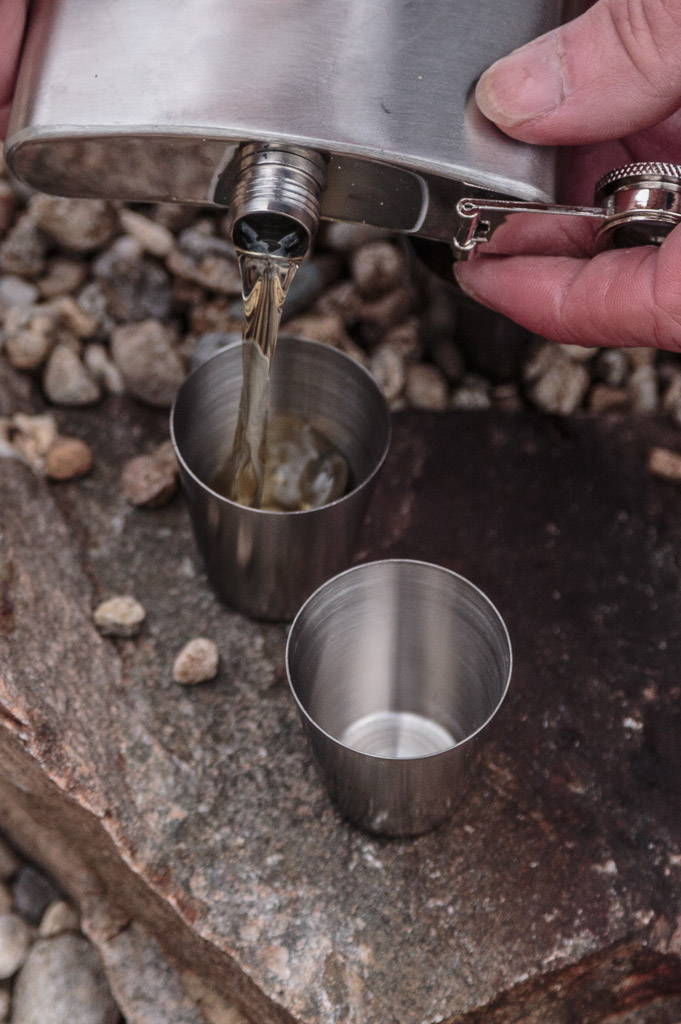 Oh no! We are talking of refreshment that comes from the barley. Ian produced a flask of cask strength Linkwood. Liquor of this strength requires to be "shown" a little water to bring out its full flavour and avoid numbing the palate. 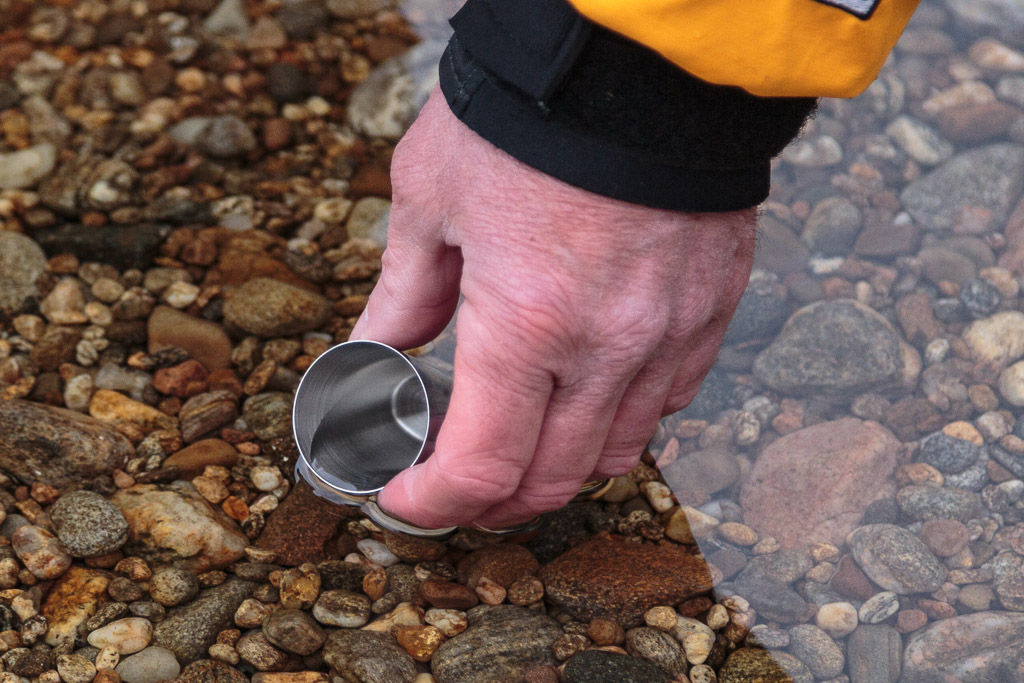 Where better to get some water to show to the whisky than the crystal clear waters of Loch Sheil? In true Royal Navy tradition, we remained seated during our toasts. As it was a Tuesday, we toasted ourselves, our expedition and our friends, in that order. In times gone by, the MacDonalds of Glenaladale would have toasted the "King over the Water" i.e. the Young Pretender, Bonny Prince Charlie. If they were at a function where they had to give the Loyal Toast to the Hanovarian King George, they would pass their glass over their finger bowl as the said "The King!" In so doing the whisky passed "over the water" before they drank it. Thus although they pretended to toast King George, this was a secret sign that their loyalty lay instead with the King over the Water.

After 1746 so many people did this that even the Hanovarians realized what was going on and such was the fear of another uprising that finger bowls were banned from formal functions where the Loyal Toast was to be given. Jacobites quicky developed a new sign, they passed their hand over the top of their glass before drinking. Again this symbolised "over the water". It was not until after Edward VII came to the throne in 1902 that he felt the Monarchy was by then secure enough to allow finger bowls to placed on formal tables again.

Alexander MacDonald of Glenaladale was a Jacobite descendent of the MacDonalds who had sheltered Bonny Prince Charlie in Loch Sheil. For many years he wanted to build a monument at the head of Loch Shiel to commemorate where Bonny Prince Charlie raised his standard at the start of the 1745 Rebellion. It was only after the significant part played by Scottish infantry and cavalry regiments in the defeat of Napoleon at Waterloo in 1815 that Hanovarian concern about another Jacobite rebellion had eased and he was finally given permission. Unfortunately he died before it could be completed. 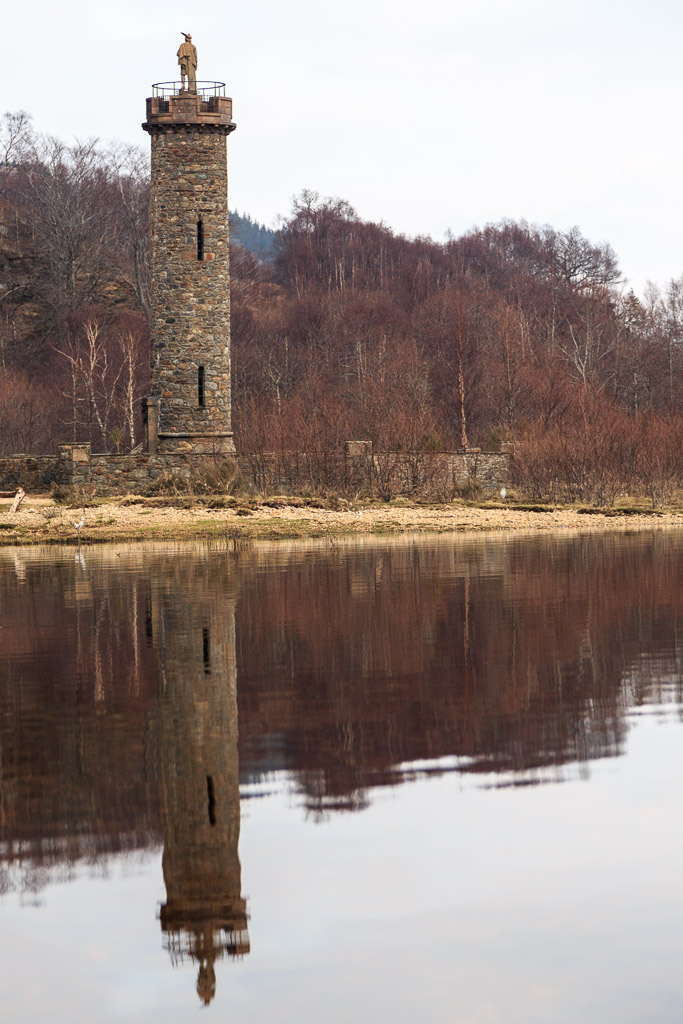 The design was a simple tower with a statue of "a highlander" on its top. MacDonald had to swear that the statue was of a simple and "anonymous highlander" and to this day the exhibition at the National Trust for Scotland visitor centre tells the same story. However, modern day Jacobites such as A Circle of Gentlemen and the 1745 Association know differently.

Photo by Kutsa from Wikipedia of the statue of the "Anonymous Highlander" on the top of the Glenfinnan monument.

This is no Anonymous Highlander! The tower is high so most people cannot make out the detail of the statue. It is worth looking through a pair of binoculars. Then just look at the fine tailored jacket, the fold of cloth on the left shoulder to represent the common Highlander's untailored plaid (the Feileadh-mhor), the wig, the feather in the bonnet that represented the chief in battle and the Star of St Andrew on his left breast. This is a statue of Bonnie Prince Charlie himself! Here is a contemporary description of the Prince by John Home, a Hanovarian, when the Prince entered Edinburgh after leaving Glenfinnan:

"He was in the prime of youth, tall and handsome, of a fair complexion; he had a light coloured periwig with his own hair combed over the front: he wore the Highland dress, that is a tartan short coat without the plaid, a blue bonnet on his head, and on his breast the star of St. Andrew." From Wikipedia, this is the portrait of Bonnie Prince Charlie as he arrived in Edinburgh by William Mosman painted ~1750.  It  hangs in the National Gallery of Scotland.

In Loch Shiel, all is not what it seems. On the beach at Glenaladale, where the MacDonalds once trod, we gave the toast slàinte mhòr! (great health!) This too is not what it seems. At first it looks like a variation of the common Gaelic toast  slàinte mhath (good health) but it is also a Jacobite toast with a hidden meaning, "health to Marion", which was a code word for Bonnie Prince Charlie! With a code name like that , was he a cross dresser? Well, yes he was. While on the run from Hanovarian troops in 1746 he escaped from Benbecula dressed as Flora MacDonald's maid!

To this day Jacobite sympathisers gather at Glenfinnan Monument on the 19th of August each year and raise a toast to the statue of Bonnie Prince Charlie at the top of the tower, "Slàinte mhòr!"