Myths, caves and tides of the Mull. 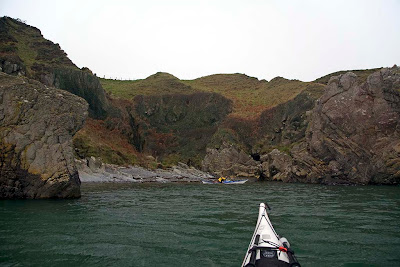 Let no one accuse the staff of seakayakphoto.com of being mindless thrill seekers! After our adrenaline fuelled circumnavigation of the Mull of Galloway, we set off northwards into the sheltered waters of Luce Bay on the lee of the Rhinns of Galloway. We were bound on a learned voyage to find the Cave of St Medans or the fairies! 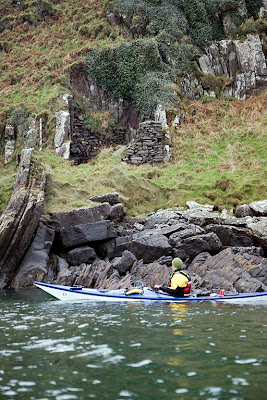 We had paddled right past the cave because it is hidden within a deep cleft in the rocks. An outer wall was built across the open end of this cleft and roofed over to form a Christian chapel. 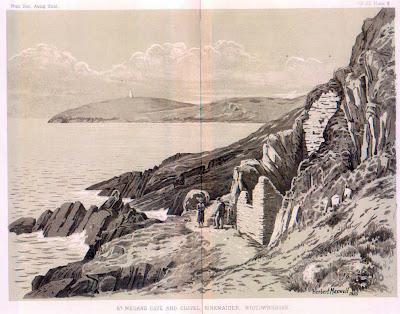 Sir Herbert Maxwell drew this view in 1885. The outer wall of the chapel has deteriorated over the last 123 years. In the 1825 an archaeological dig unearthed a prehistoric human tibia in the cave and in the chapel, 12th century coins from the reigns of Kings Alexander and David of Scotland. 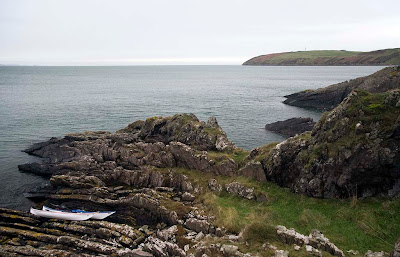 This is the present day view from the door of the chapel, just where the figures in Maxwell's drawing are standing. Apart from the corner wall of the chapel, which has crumbled so that you can't see where the window and door were, the only change is the low roof of the Gallie Craig visitor centre which is right on the horizon of the Mull, to the right of the lighthouse. 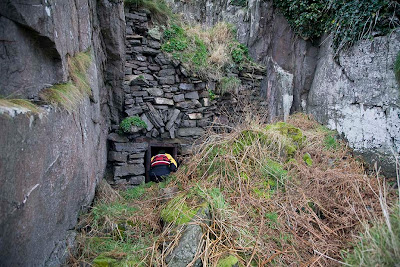 Tony explores the cave at the back of the chapel. 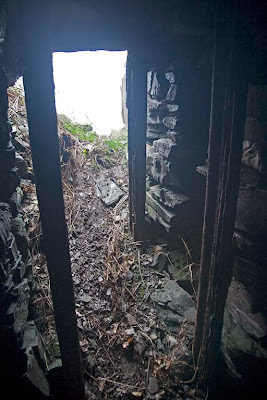 Modern but rusting ironwork supports the door lintel. The cave was remarkably warm and dry. 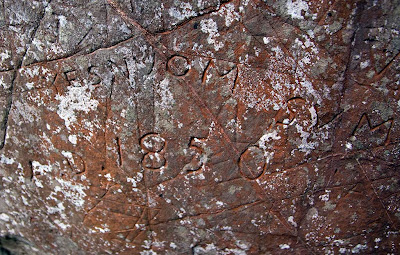 The oldest inscription we found was AD 1850.

Of course the Christian Church has long built on ancient superstitions and pagan places. The cave was originally known as the Fairy Cave. Sailors of old would leave offerings of food to ensure fair winds and tides for a safe passage round the Mull. It was not advised to wait for the fairies to come out of the darkness of their cave and watch them gather these tokens of maritime respect. The mere sight of a fairy, by even one sailor, could prove bad luck for an entire ship. Apparently a hermit led a pretty comfortable and very well nourished life in the cave for many years. I threw the last of my lunchtime sandwich towards the mouth of the cave but a hungry gull proved faster than any fairy!

We had of course planned this day all wrong. We should have paid our (edible) respects at the cave before starting our voyage round the treacherous tides of the Mull. Frankly, after such disrespectful behaviour towards the fairies' nutritional needs, we were lucky to get round the Mull in one piece but we learned a lot!