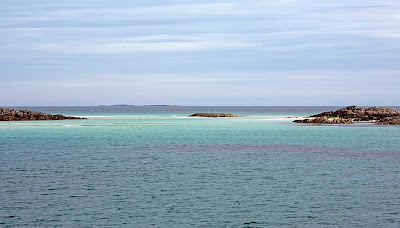 On the morning of 2/6/2008 we were awoken by the "put put" of a single cylinder diesel engine puttering round the turquoise waters of the Monach Islands. When we came up on deck our spirits were raised by the start of a fine day, this was the day we hoped to reach and paddle round the shores of St Kilda but at first we could not see the source of the sound. 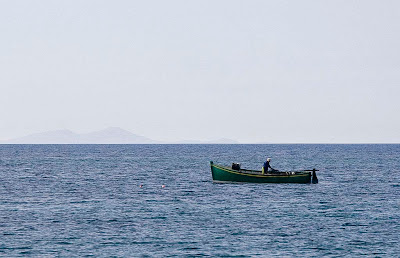 Then a lobster boat took shape as she emerged from the burning reflection of the early morning sun. This was no ordinary GRP lobster boat. This was a Grimsay boat. The Grimsay boat is to the Outer Hebrides what the Model T Ford was to the rest of the World. These boats proved to be versatile for both transport and fishing throughout the isles. Since the 1840's it is estimated that over 1000 Grimsay boats were built by the Stewart family until their last full time builder died in 1994.

It was a joy to see this Grimsay boat being handled by Donald Brady from North Uist as he checked his lobster pots on the Monach islands. The Grimsay boats were of wooden clinker construction but with an exceptionally deep and fine keel. This allowed them to handle the Atlantic swell and surf found on the west coast of the Outer Hebrides. Due to the lack of harbours on the west coast, these boats were built in sizes of 10 to 28 feet. This allowed them to slip through tidal channels between the islands to sheltered anchorages on the east coast.

In 1928 the Grimsay yard launched the Morning Star. She was the link between the mainland of North Uist and the isolated community on the Monach Islands. She carried passengers, supplies and the mail. In recent years she had lain in disrepair in a mud berth in a creek of Loch Maddy in North Uist. She was restored and relaunched in 2007 by apprentices working at the Boatshed in Grimsay. 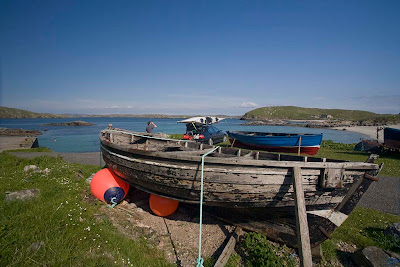 We had seen other other Grimsay boats in various stages of restoration at Bhaltos when we first arrived on Lewis.