The hill tracks of Galloway and the harvest of the sea 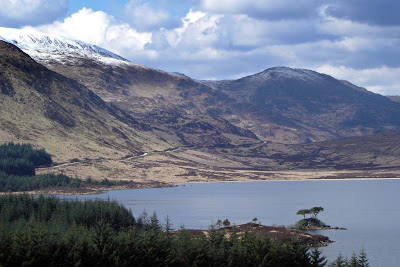 From a distance it looks like the hill tracks of Galloway have a dusting of snow. 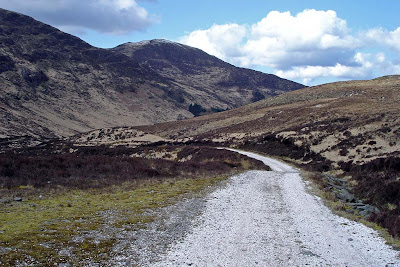 But as you walk or ride on the tracks, the crunch of this white covering is like no snow. 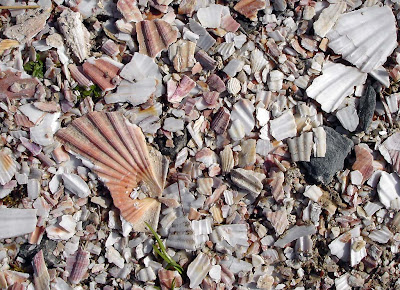 It is composed of tons of scallop shells which are a by product of the Kirkcudbright scallop fishing industry. There is no more space to dump them at the back of local farmers' fields, so they are now brought up here and dumped on the hill tracks. As the shells break down, the calcium carbonate might do something to reduce the effects of acid rain which has damaged the Galloway hill lochs.

Seeing the sheer number of scallop shells scattered on these hills, you realize just how big the scallop industry is. I know the Irish Sea is a big place but I do hope this proves to be a sustainable fishery.


The following is an extract from SEPA View, issue 17 Autumn 2003 the magazine of the Scottish Environmental Protection Agency.

Of 500km of fishless waters in Scotland, Galloway has 400km. Much of this relates to the extensive forest coverage in the area, which exacerbates acid rain. The trees filter out the acid and concentrate it, so when it rains the acidified water runs into the nearby watercourses. In many countries, lime has been successfully used to counteract acidity either by direct addition to water or application over the catchment land. However, this is an expensive and perhaps unsustainable procedure. As scallop shells are 95 per cent limestone in composition and the country’s largest processor of waste scallop shells, West Coast Sea Products, is situated in Galloway, an action plan was established to determine whether the shells could be used as a viable means of reducing levels of acidity in local watercourses. As waste, the shells must be disposed of in a manner that conforms with the exemptions laid out in the Waste Management Licensing Regulations 1994 which permits them to be used in road construction. Two methods are currently being employed. In the first, clean, crushed shells are incorporated into the sub-base aggregates, effectively burying them. The second, more appropriate use, is as a road surface dressing. In theory, the passage of vehicles will speed up the release of calcium.

SEPA Galloway team leader, Stuart Coy said: “This experimental use of shells is still very new to Galloway and the logistics of getting them from the factory to the forest in an acceptable condition are continuing to develop. If it can be made to work then it seems there will be benefits all round. “Should there be a reduction in the quarried aggregate required for road construction, the use of the shells in this way means that they will not be going to licensed landfill which would have cost around £100,000 for disposal. Ultimately, much-needed calcium will be released into acidified surface waters.”
Posted by Douglas Wilcox at 5:23 pm 3 comments: