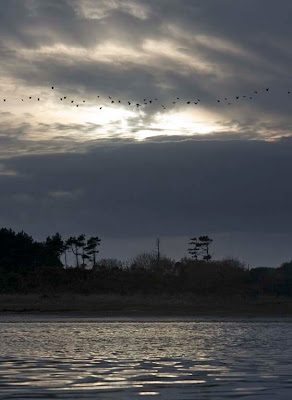 As the watery sun set over the Garnock estuary, a flight of wigeon flew high overhead. Below, hidden amongst the trees, is the ICI Nobel division factory at Ardeer which was founded by the Swede Alfred Nobel (of prize fame) in 1873. It manufactures nitroglycerin and dynamite....


On September the 8th 2007 there was a huge explosion and fire. It was started by three local boys, two 14 year olds and a 10 year old. They have been reported to the children's panel. Maybe their pocket money will be stopped for a week.

All was quiet as we left in the twilight.