The church and evolution on St Kilda. 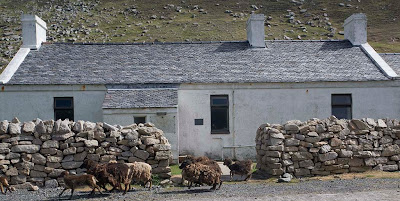 The manse was the residence of the visiting minister. It lies remote from the village and some way off the street which connects it to the store by the sea. The islanders' Soay sheep were moved to the island following evacuation and have been left to their own devices since. 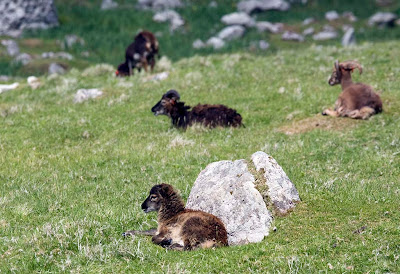 They breed and die with no animal husbandry or veterinary intervention. Their corpses lie where they fall. Countless generations of selective breeding by the St Kildans stopped in 1930 and since then the population has been subjected to the forces of natural selection and survival of the fittest. Interestingly the proportion of lighter coloured but smaller sheep has steadily increased in the population. A long term study by the University of Sheffield has demonstrated that this is due to changing frequency of a group of genetic variants that decrease size and lighten coat colour but increase reproductive fitness. This study provides molecular evidence for evolution in action and supports Darwin's theory. 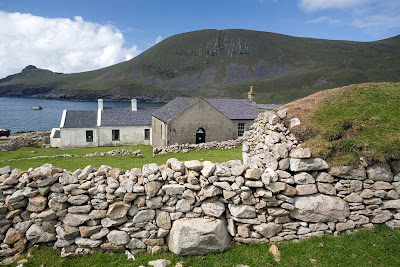 Both the manse and the church, which lies immediately behind it, were built from 1826 to 1829 to plans by Robert Stevenson (of lighthouse fame). The first minister to live in the manse was the Rev Neil MacKenzie. A schoolroom was added to the side of the church in 1900. After the evacuation of the islands in 1930, the buildings fell into disrepair. The manse was restored in the 1950's for use as the sergeants' mess in the military radar base. The church and schoolhouse were restored in 1980. 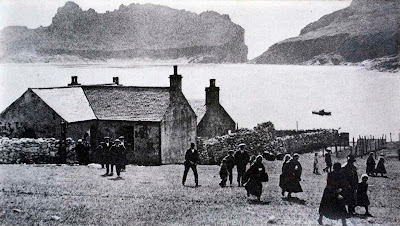 This photograph is part of a display in the schoolroom. It shows the islanders leaving the church after a service on the Sabbath. By the 1880's the islanders had become gripped by an extreme form of Presbyterianism and religious observance. Their previous joy in music and dance had died out and preparations for the Sabbath interfered with the very work which was essential to their survival. By the beginning of the 20th century the grip of religion had slackened slightly but by then it was too late and the islanders would not be self sufficient again as their population numbers went into terminal decline.

I wonder what the ministers' thoughts on evolution and genetics might have been?