Breaking the spell of the Cailleach Uragaig on the NW coast of Colonsay. 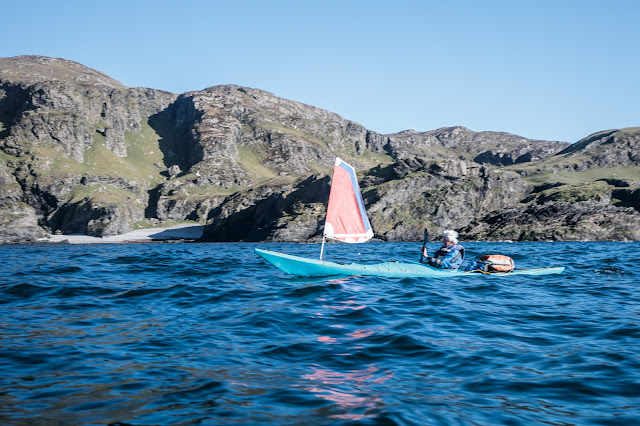 The only break in the rocky ramparts of the NW coast of Colonsay was at Port Ban but reefs at low tide prevent landing much of the time. Even if the swell allowed you land at HW, you would find yourself trapped by the surrounding cliffs. So we paddled on without a sideways glance. 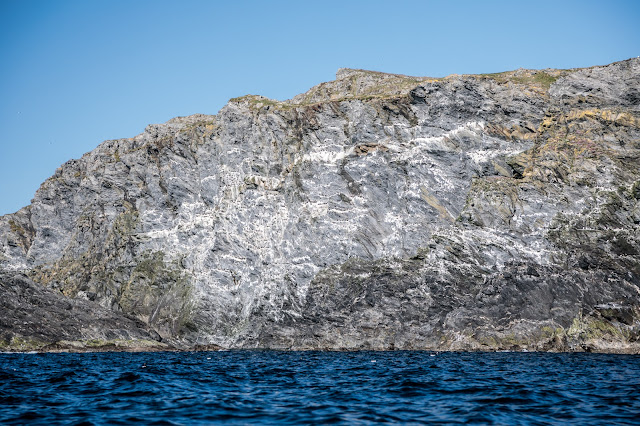 W reserved our sidways glances for the amazing bird colonies which cover these inaccessible cliffs. 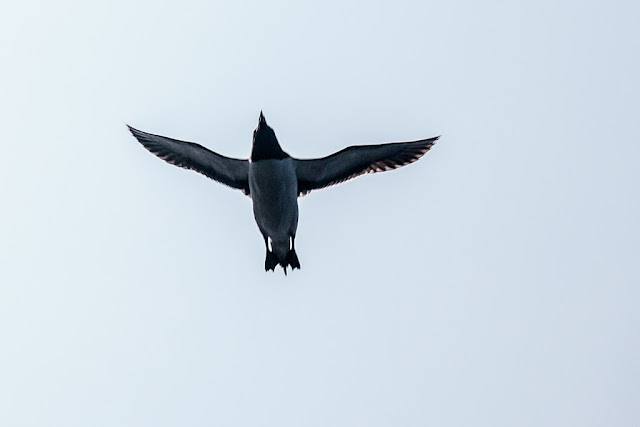 Predominantly the species were razorbills and guillemots but there were also plenty of puffins. The air above us was full of whirring wings and... 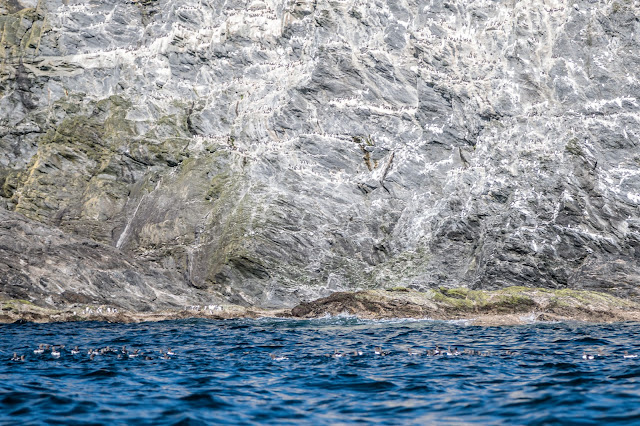 ...the sea was covered with rafts of resting birds. Fulmars and kittiwakes were also nesting at the edges of the main colonies and the mournful but atmospheric cries of the kittiwakes echoed round the geos. 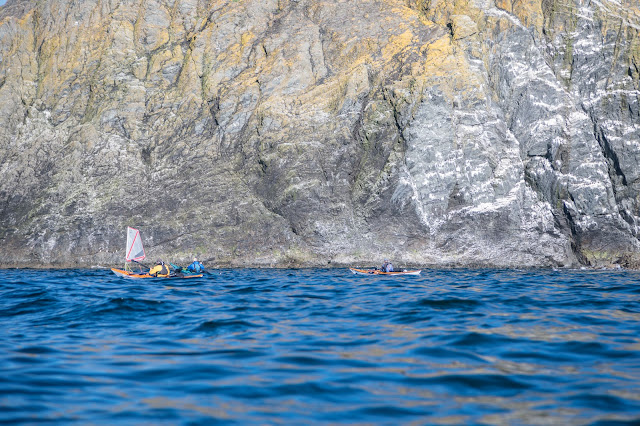 The incessant noise of the birds and the smell of the white guano deposits which contrasted with the yellow lichen on the steeper parts of the cliffs left us in no doubt that we were in the environment of the birds. There was no sign of the hand of man, not even a lobster pot. 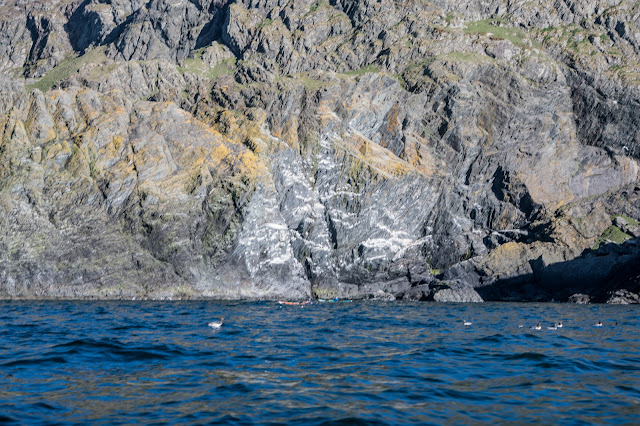 We were dwarfed by the scale of the place. It was very reminiscent of paddling round St Kilda. I have been on two boat supported paddling trips there and Ian has been on one. In many ways this was a more intense and close up experience as we had got here from the mainland (some 70km in our wakes) by ourselves. 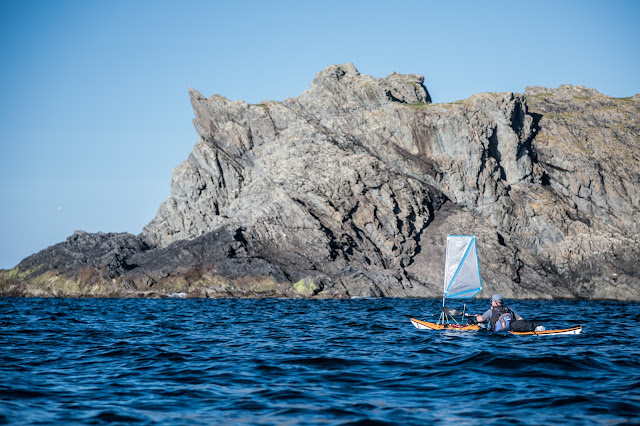 We were well tired by the time we approached the bold headland of Cailleach Uragaig. Atop the headland rests the grim, grey visage of the Cailleach herself. The Cailleach Uragaig (The Hag of Colonsay) is a Celtic Goddess who has powers to shape shift herself so that she can appear as a hag, a mother or a virgin. She is a winter spirit who ushers in winter by washing her plaid in the Corryvreckan and she can often keep the arrival of spring at bay. On Colonsay she kept a young girl captive to steal her youth. She hid herself from the girl's angry lover by transforming herself into this rocky headland. 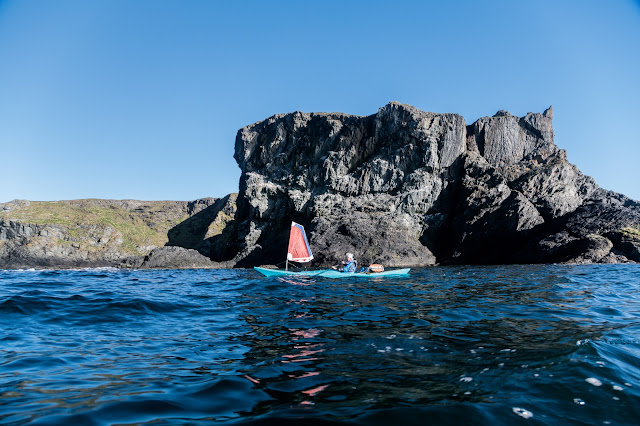 Tired sea kayakers always hope that the sands of Kiloran Bay will be just round the corner from the hag but they... 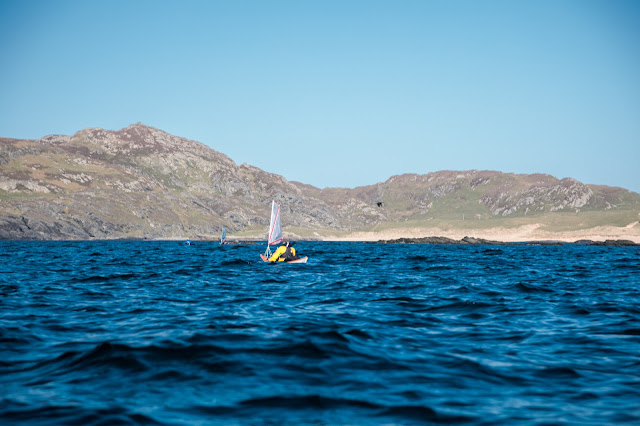 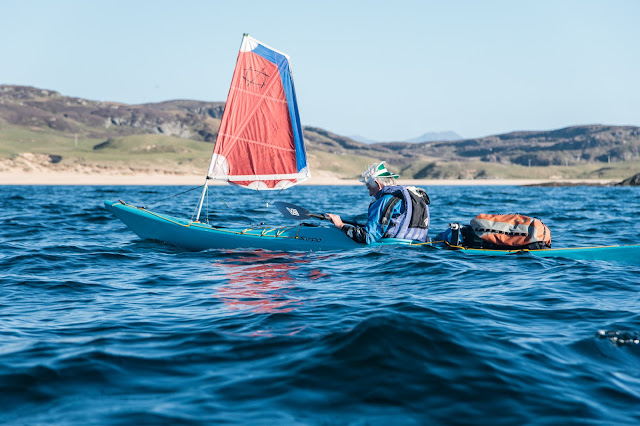 David was now getting very tired. It was 7pm and we had been paddling all day. David is well into his eighth decade and it is quite remarkable that he still has the stamina for such long trips.  He thought I was being very gentlemanly waiting behind with him but in truth I was not well and having difficulty keeping up with him! 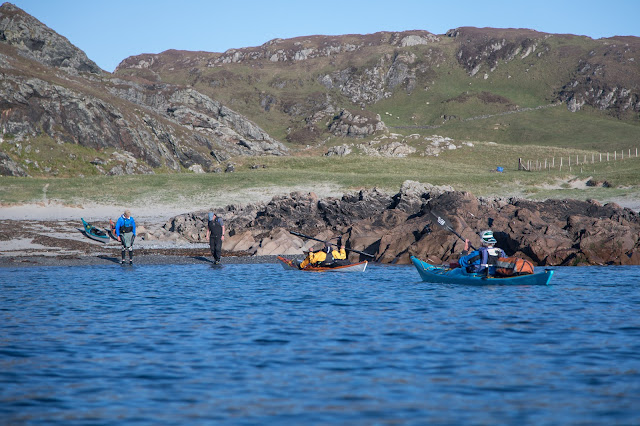 It really was a relief to paddle into Kiloran Bay where we intended to camp. 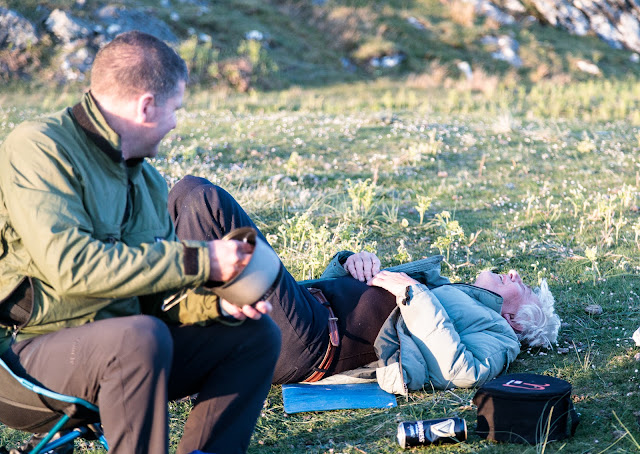 As soon as he got out of his kayaking gear David laid himself down on the machair and fell into such a deep sleep that we feared the Cailleach herself had enchanted him and that he might not awake for years! Fortunately we broke the Cailleach's spell, by opening a can of Guinness. The PSSSHT soon had David awake!