Quiet as a bothy mouse in a stormy night. 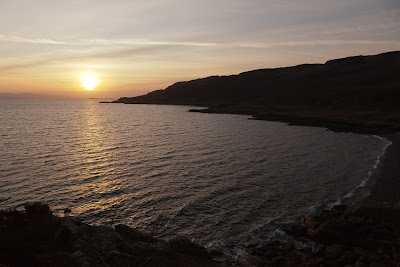 No sooner had we arrived back at the bothy than the sun began its exit from the day. 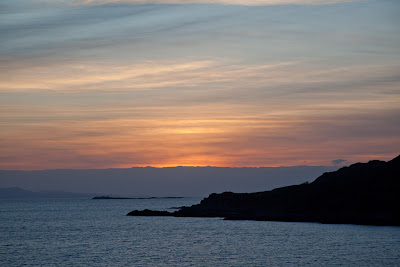 We stood and marvelled as the deepening reds of the last of the day's embers slowly faded. We were so grateful that the existence of this bothy allowed us to witness the beauty of this winter sunset on such a remote coast. All too soon, the plummeting temperature hastened us back indoors. 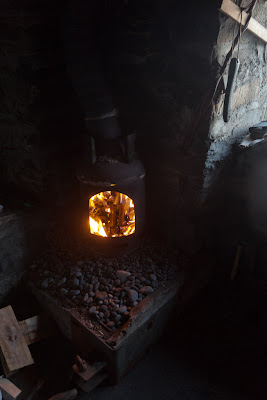 The bothy had warmed up with the stove glowing (and smoking) in the corner. 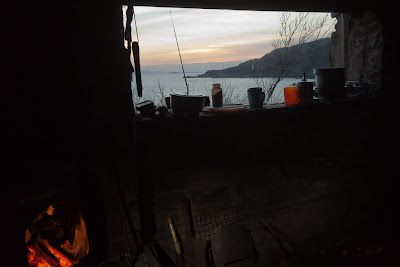 We prepared another fine feast and sipped Glenfiddich as we listened to the Radio Scotland Outdoor Conditions forecast for the following day: SE F4-5. The wind was to increase overnight to force 6 then ease in the early morning before picking up again. We decided to have an early night and get away first thing in the morning.

The bothy mice came out early and scuttled about in the flickering light of the fire. Unfortunately my knee was so sore I had to get up in the middle of the night for some painkillers that were somewhere at the bottom of one of the Ikea bags. We had hung them from the rafters to keep the mice away from our gear.

I fear I disturbed Ian more than the mice because I certainly wasn't as quiet as one. As I finally drifted off into a fitful sleep, I was dimly aware of the gusts of wind causing the bothy to shudder. The mice scurried round unnoticed for the rest of the night.
Posted by Douglas Wilcox at 7:00 am No comments: