Arduaine, gateway to the Isles 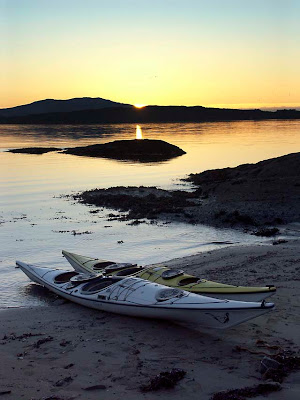 This sunset behind Scarba was taken from the pier at Arduaine (Ardoonie) in Argyll. The name means green point. This winter sunset was taken three years ago but in the summer, there is nothing more exciting than setting off from here as the sun is setting on a Friday night. Where will we end up? There are so many possibilities! Luing, Shuna, Seil, Kerrera, Mull, the Garvellachs, the Black Islands, Lunga, Scarba and Jura are all within a weekend's paddle and the waters to get to them include the tidal Cuan Sound, the Grey Dogs and the mighty Corryvreckan! You could embark from here 25 times and return having covered a new route each time. This variaty of possible routes is one of the reasons why I like sea kayaking on the west coast so much. This is not an A to B linear coastline!

For many years John Rintoul ran a campsite at Arduaine which was a favourite with sea kayakers. It closed before I took up sea kayaking but myself and friends used to camp here on the way north or south on motorbike touring holidays. Many years ago I watched three German kayakers carry their boats to the waters edge. There was a north east wind blowing and I was amazed when they each pulled a little rope and each kayak sprouted a mast and sail. They soon disappeared in the direction of Shuna.

The Arduaine pier was built to service the island of Shuna and we often leave cars on the broad approach to the pier overnight. There has never been any problem with this. However there are plans to build a new private house here. Its entrance will use the pier road. I do hope it will not restrict access to this valuable launching site which is our gateway to so many Isles..
Posted by Douglas Wilcox at 10:48 pm No comments: