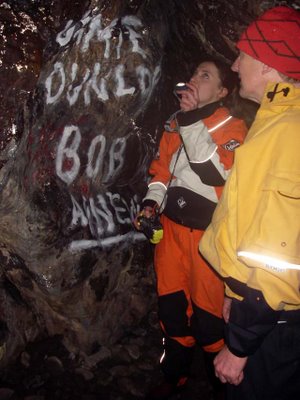 A trip to Bennane Head on the lower Clyde found us inside the cave and principal dwelling of a Mr Alexander Bean who frequented these parts in the 17th century. He was known as "Sawney" to his friends (most of his aquaintances had little time to develop friendship). Together with his brood of 48 butchers he is reputed to have cannibalised about 1,000 victims over a 25 year reign of terror. The Bean family were finally run to ground and the males were executed by amputation of the limbs and the females by burning. The walls of the cave have stood as silent witness to this horror for thee centuries. Today, they ran red with iron oxide, as if still bleeding in silent sympathy with those who had met their grisly end within. We found no femurs. Despite the ancient land of Alba having a past brim full of blood thirsty deeds, the historical veracity of Sawney Bean's place in Scottish history is in some doubt. 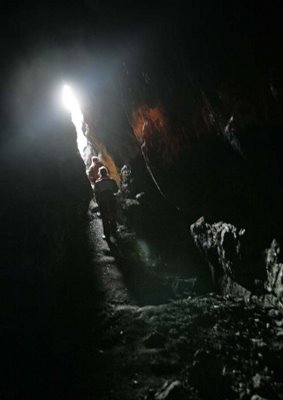 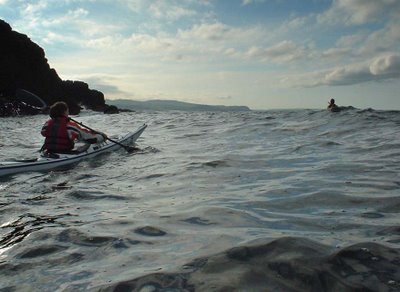 The coastline from Lendalfoot (where Mr Alastair Wilson of Lendal Paddles has a home) to Loch Ryan was a superb mixture of volcanic rocks, including pillow lavas, and huge shingle beaches. The section from Ballantrae south was a rockhopping paradise. The coast is commiting, being exposed to the NW Atlantic swells, and a force 4 to 5 SW wind developed as the day wore on. Entering Loch Ryan the Stenna Line HSS ferry threw up a 2 metre wake. We made sure we were well clear of the rocks but were nearly caught out by the rebound of her other wake which was reflected back across from the far side of the loch some time later.
Posted by Douglas Wilcox at 11:40 pm No comments: