The feudal store of St Kilda 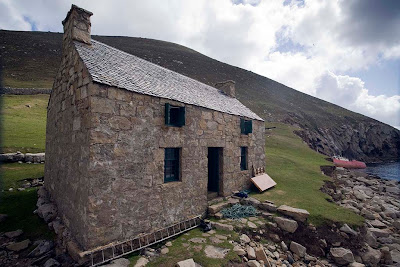 On making one's way up from the jetty on Hirta, the main island in the St Kilda archipelago, the first building encountered is the store. It is the first modern building on the island and was constructed sometime before 1818. The walls were built using lime mortared stone. The end walls were gabled and constructed with chimneys. The roof was of slate. At that time, the St. Kildans lived in blackhouses whose rounded walls were built from stones and turf and the roofs were made from turf or thatched with barley straw.

The substantial nature of the store was necessary as this was where the island produce of the preceding year was stored. It awaited the annual visit of the factor from the mainland. He collected the islanders' rent in kind, which was to paid to the landlord, the chief of the MacLeods of Dunvegan in Skye. Goods consisted of feathers and oil from seabirds and woven woolen cloth called tweed.

Just behind the store you can see the barrel of a large gun and further on, the wreck of the Spinningdale.