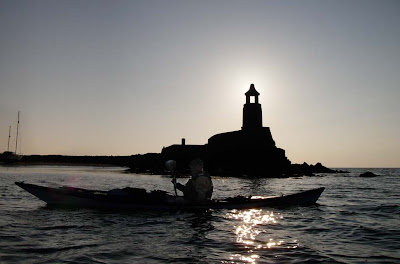 On Saturday we paddled to Port Logan, which featured in the BBC series "2000 Acres of Sky". The series was based on a fictional and remote island community called Ronansay which lay off the west coast of Skye.

Port Logan was originally called Port Nessock and in the 17th century attempts were made by the McDouall family to establish it as a ferry port for Ireland. They also built the Port Logan Inn which now makes a fine sea kayaking pub. (See here for what makes a good sea kayaking pub.)

The quay and Port Logan Light were built in 1830 by Colonel Andrew McDouall. The light is a conical stone tower with a platform for a lantern. It is not known when it was last lit but for sometime after that it had a bell, which was rung to guide local boats back in foggy conditions. A decent road to the village was not constructed until the early 20th century, so most of the village's trade and traffic depended upon the sea. A life boat station was built at Port Logan in 1866. It closed in 1932 as the RNLI lifeboat at Portpatrick, 18km to the north west, was motorised by then. The boat house is now the village hall which you can find near the quay. 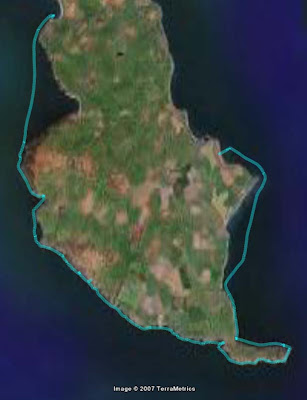 We set off from Drummore and so had to pass one of the great headlands on mainland Britain. The Mull of Galloway is the most southerly point on Scotland. It juts into the Irish sea separating the Solway Firth from the North Channel between Scotland and Ireland. We were prepared for the strong tides and magnificent caves. What we were not prepared for was the stunning cliff coastline north west to Port Logan.

I do but it was shot in pretty flat light so it is not the best. Here it is...

I do not know where you stay but if you get the chance, you should visit Galloway. It is a wonderfully unspoilt region.
Posted by Douglas Wilcox at 10:50 pm 3 comments: