A Double Dutch and a Rum on the rocks please. 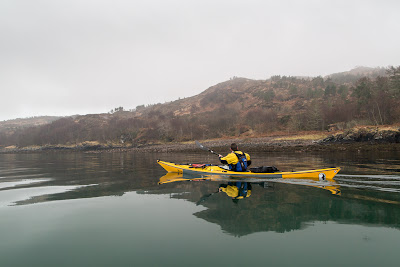 Ian and I set off on the third day of our Small Isles adventure from Loch Scresort on Rum. We soon passed the Scottish Natural Heritage otter hide (hidden away in the trees). Strangely enough this was one of the few places where we didn't see otters! 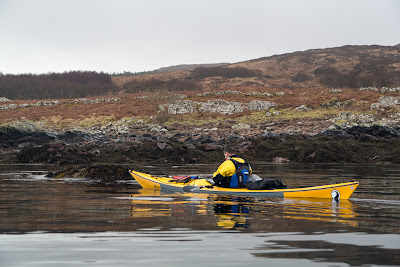 At the mouth of Loch Scresort we passed the sad remains of Port na Caraneon. 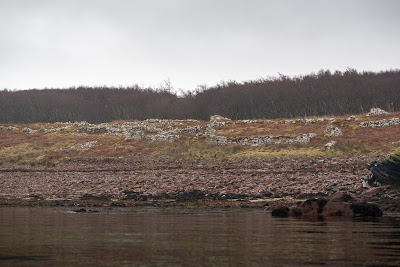 The original crofters who were mostly based in the better lands of Harris in the west of Rum were cleared by about 1828 when this village of black houses was built. These were built by people who had been cleared from Skye but were brought here to work sheep on the island. Sheep were never profitable on Rum and the village was abandoned in 1850 when the lands of Rum were turned over to deer and it became a shooting estate for the entertainment of wealthy gentlemen from afar. 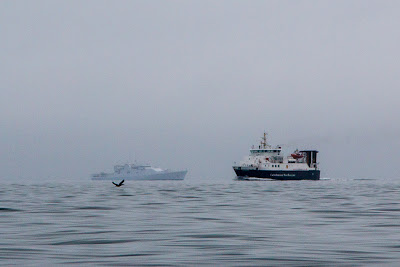 Paddling along the SE coast of Rum the fog thickened then we heard a lot high speed (but incomprehensible to our ears) radio communications on VHF channel 16. Ian thought it was Dutch. The MV Loch Nevis appeared on the visit to Rum but moving slowly behind her was the  Hnlms Groningen, a Holland class offshore patrol vessel. She had a RIB out and was clearly involved in some sort of exercise. 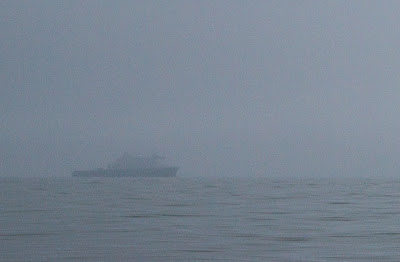 Then the fog thickened further and a sinister outline slowly loomed out of the grey. She was the Hnlms Johan De Witt, a Dutch LPD ship (landing platform dock) of some 16,500 tons. She was moving very slowly so Ian tried to raise her on the VHF but she was not answering. Later we discovered she didn't have her AIS switched on either. She didn't switch AIS on till several days later when she suddenly reappeared in the middle of the Irish Sea prior to a courtesy visit to Liverpool. 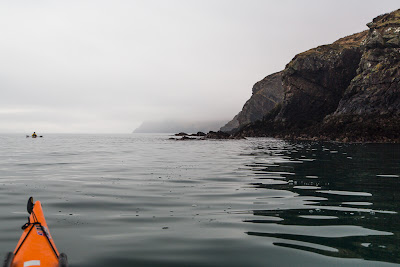 Ian and I really didn't fancy crossing the Sound of Rum to Eigg in thick fog while two non communicative naval vessels were exercising in mid channel so we set off down the coast of Rum, passing... 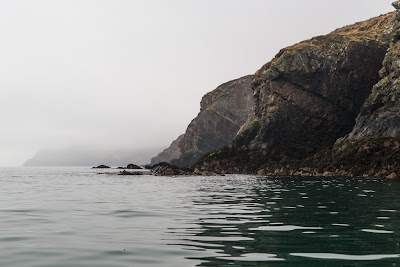 ...several otters, under imposing headlands until... 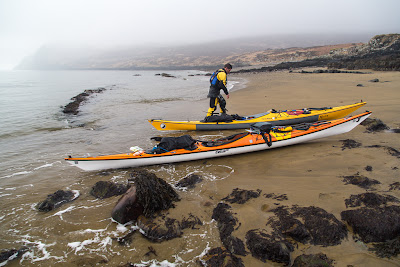 ...we came to a break in the rocks at the lovely Bagh na h-Uamha. 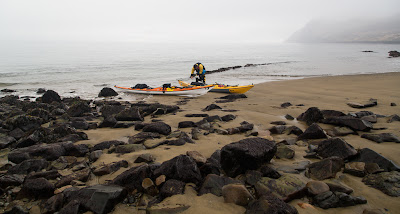 Ian got his VHF out and climbed up high above the beach to try and make contact with our Dutch visitors whose rumbling engines still echoed round the cliffs. 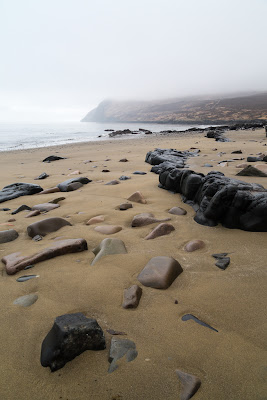 My knee was a bit sore as I had dislocated it on the castle stairs earlier that day, so I was content to sit on the Rum rocks rock eating lunch and soak in the beauty of this lovely place until Ian returned. 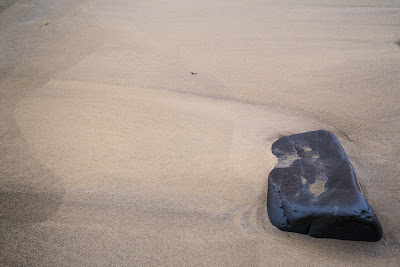 Ian (who is a ship's communications professional) had been unable to raise either of the Dutch ships on VHF..."It was like trying to talk to a stone" he said... so we enjoyed an extended luncheon while the sound of their engines and their radio silence gradually faded down the Sound.


Posted by Douglas Wilcox at 8:05 pm No comments: