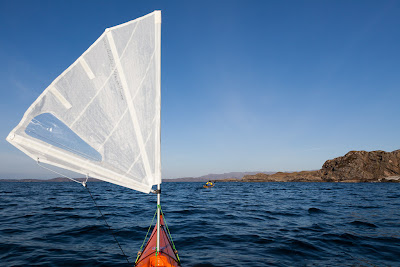 Ian and I could hardly drag ourselves away from Port Paradise and our second luncheon. However, we had a long crossing ahead of us and the MSI forecast from the coastguard had a strong wind warning for the area just to the north of us and for our area it was forecast to get up to Force 6. Close in to the lee of the land, I put the sail up and sailed as Ian paddled along. 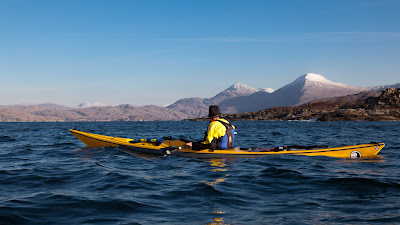 At the point, Ian slowed to look, not at the snow capped mountains but at his eponymous inlet.

Once we left the land the SE wind increased to force 4, with whitecaps on the waves matching the snow caps on the mountains. I had to drop the sail as even without paddling I would have left Ian behind (and it was too cold not to paddle anyway). A swell from the SW was mixing entertainingly with the wind blown waves from the SE so there were no photos on the crossing but I can assure you that the bright sunlight, white caps with flying spray, dark blue sea and snow capped mountains are etched in our minds. 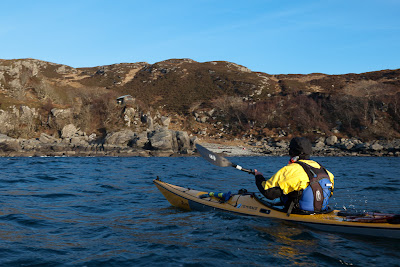 It was only when we got in the lee of the headlands near the bothy that we could relax and take photos again. My bad knees had taken a bit of a battering on the crossing with the continual bracing and it was with some great difficulty that I exited my kayak. 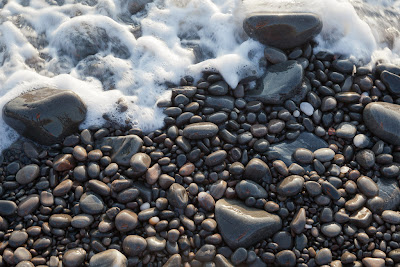 I made a detailed and very close inspection of these lovely pebbles, when I discovered that my legs were no longer working. 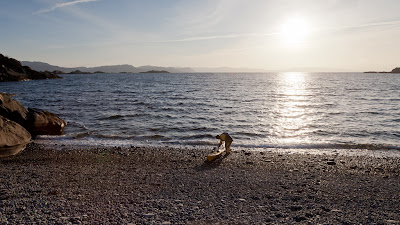 Fortunately Ian came to my rescue and assisted me into a vertical position! I was quite glad we had turned back when we did and had completed the crossing in daylight. We arrived safely, half an hour before sunset. 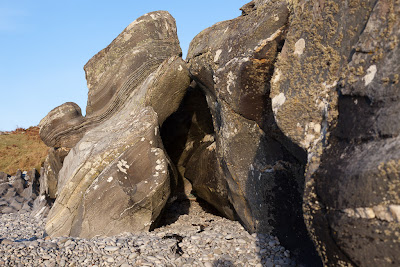 We changed out of our drysuits and wet boots and left our kayaking gear in this fascinating little cave. It was right at the top of the beach and must have been made when the sea levels were higher.

In preparation for the climb to the bothy I took a couple of very strong pain killers but they were not nearly so good as Ian's 18y old oak finished Glenfiddich. I was looking forward to a double dose of that to help me get to sleep that night... purely for its medicinal purposes you understand, trust me, I am (rather, was) a doctor!
Posted by Douglas Wilcox at 2:41 pm No comments: