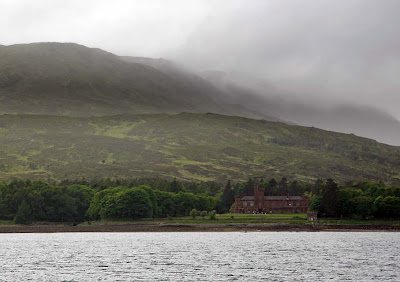 Kinloch Castle with a sea kayaker in front for scale.

Yesterday I posted an item about a red sandstone castle on Arran. Here is another one. It is Kinloch Castle on the Island of Rum in the Inner Hebrides. It is situated in a sheltered position under the Rum Cuillin at the head of Loch Scresort on the east coast of the island.

It is not an ancient Scottish castle but was built as an Edwardian shooting lodge by a wealthy Lancashire industrialist called George Bullough. There is no suitable sandstone for building on Rum so all the stone was imported from Annan in Dumfriesshire and brought here in small west coast puffers. It was completed in 1901 and was the first private building in Scotland to have elictric lighting. The electricity was supplied by a small hydro electric dam in the mountains behind. 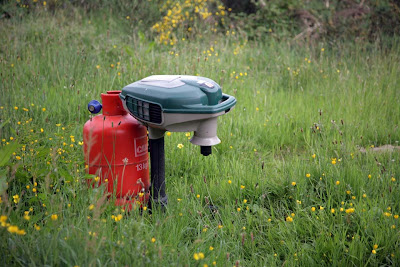 You can camp near the Castle, but the gas powered midge eating machines can hardly cope with the particularly voracious breed of midge which is to be found in these parts. I therefore recommend staying in the hostel which is situated in the castle's servant quarters. No four posters for us plebians then!
Posted by Douglas Wilcox at 9:21 pm 5 comments: