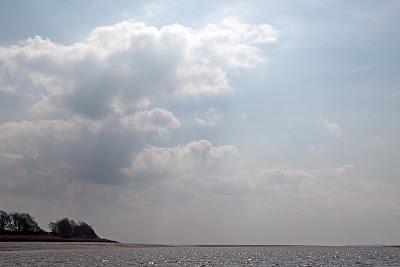 Leaving Glencaple, we entered the 2.5km straight channel, which is hemmed in by mud banks and connects the Nith to the sea at Airds Point. It was here that we expected to meet the Nith bore. It was 2 days after springs, on an 8.1m tide, so we expected a wave or two! It was 12:43. High water Hestan Island (0n the Solway) was due at 14:47 (HW Liverpool 14:21) We were drifting downstream with the river current at 8km/hr when all of a sudden the water ahead began to slope down towards us, its colour darkened and its surface was contorted with small ripples, then whumph! We were now travelling back towards Dumfries at 12km/hr. There was no broken water just a sudden change in velocity of 20km/hr! It was really quite disconcerting.

We were going to make nothing against the current on the right side of the channel, so we ferried across to the far side where the water was shallower. This and the help of an eddy allowed us to get another 500m towards the sea. We then ferried back to the right side of the channel where a series of piles created a little eddy from which we clambered onto the mud bank. 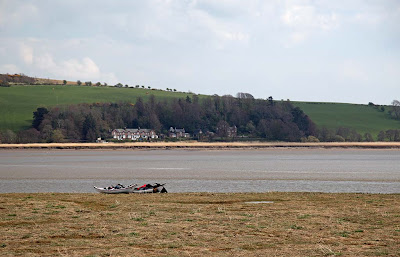 We dragged our kayaks up the steep mud and onto the merse above. We decided to have a lunch break and watched the tide rush by, filling the bay and covering the mudflats. 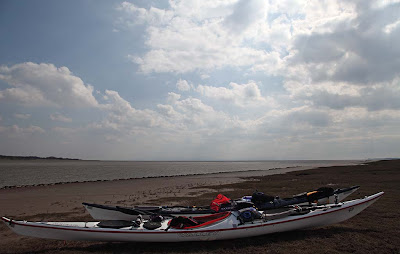 Just as suddenly as it had begun, the flood tide began to ease after only an hour. 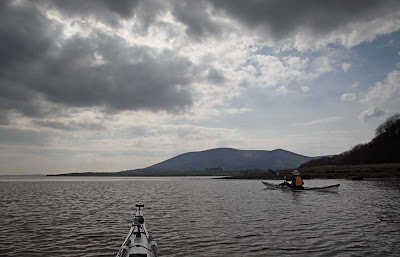 We were soon on the water again and clearing Airds Point. Criffel came into view with Carsethorn at its foot. Carsethorn is another of the ports of Dumfries. 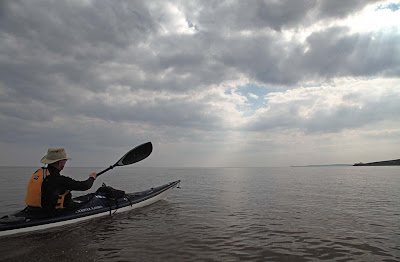 Carsethorn lies on the long low peninsula on the horizon, it was still 6km away.